Hey Guys! Have you ever played Foxhole and said to yourself "I wish this game had roughly 56% more towns?" Well do we have a treat for you! Part 2 of our Town Revamp Devblog is here, and this one is all about Implementing this monumental task. Lets dive right into it shall we?

Disclaimer: All of the content below is heavily work in progress and is subject to change.

Last week’s deep dive into the town revamp, I went over how we started, explaining how we asked ourselves why we wanted to change things in the first place. This week, I’ll talk about some of the really early challenges on the level design side. We obviously wanted to change things up, but at the same time, we do have an entire working game to consider, so while at first, the sky was the limit, at this stage we needed to bring it back down to earth.

Since goals had been established, I designed a quick prototype map on paper, to get a sense of what a more dense town might look like in Foxhole, which you can see above. We’d figured out smaller villages and farms pretty well, but nothing with tightly packed buildings and alleys. We built some rough assets, which I then used to block in the aforementioned map to get it working and start testing right away. Even initially, we knew we were on to something, but there were many things that felt incongruous with what we liked about Foxhole. 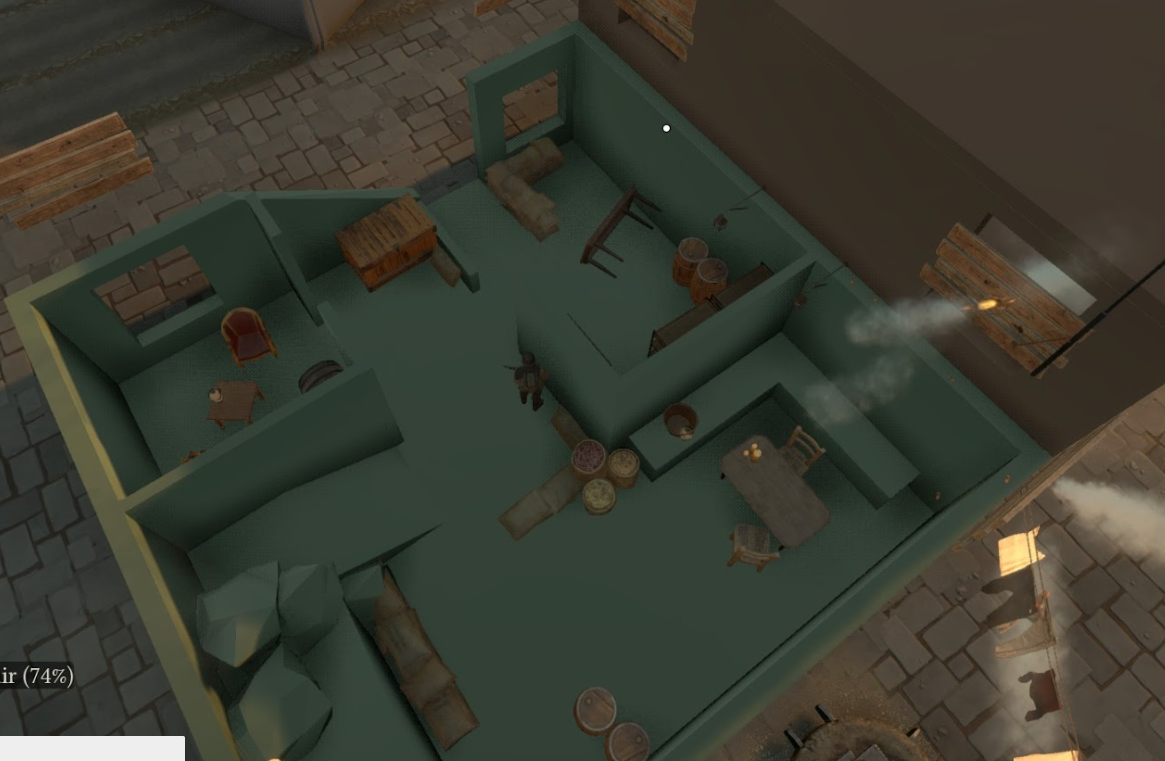 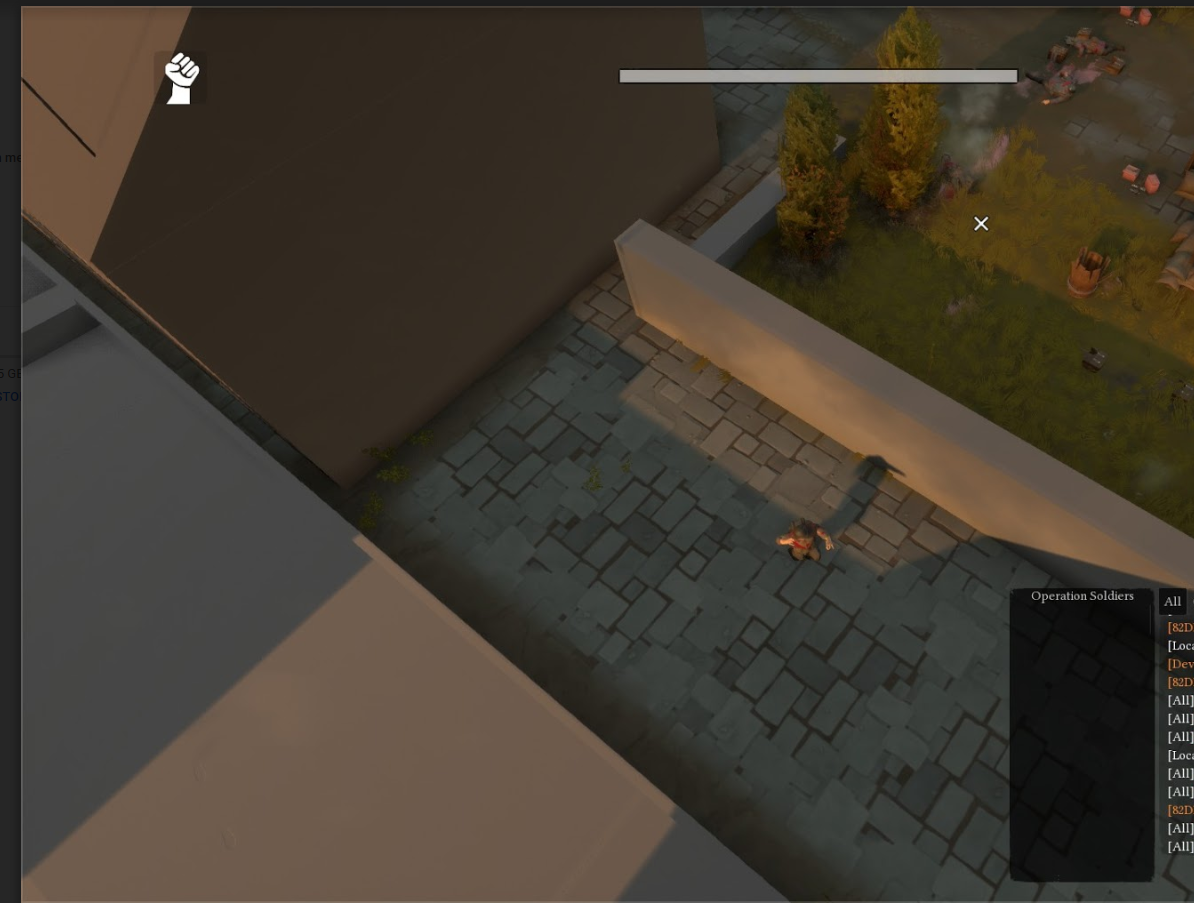 Firstly, there was this overall sense of claustrophobia that happens when you were surrounded by all sorts of tall buildings and tight corridors, especially from a top-down view. Another big problem is that while we wanted more dynamic urban-style combat in the buildings, especially early on we tried having stacked floors and cluttered interiors, we learned pretty fast that our combat mechanics didn’t really allow us to have these really intricate details. Some of the combat changes during this time have now made their way back into the game, but we also made many adjustments to our level design sensibilities.

Something interesting happened in the next couple of tests. One feature that testers loved so much, was having buildings, whether destroyed and built, able to be used them for interior cover. This was something originally we hadn’t intended to do, but the more we tested it, the more fun it was to engage with. We cleared out the clutter and focused on macro cover scenarios. Following our prototypes, we designed this strict group of building types that you see above to simplify the collisions and the pipeline. Now, this doesn’t mean there would only be these few structures. We could have several different looks, but locking down the collisions/garrison position made any other changes purely superficial, and that’s good all around for consistent design.

With more confidence in direction, we built a new test map, this time inside of an existing map (Fisherman’s Row) for testing. These were particularly interesting because we started to limit what could be built in towns while using intentionally designed buildings and scenarios involving real Foxhole gameplay. It was pretty cool to watch it all come together. A couple of tests in, we also blocked in some villages with our new pipeline just to get a sense for it. These village tests gave us a ton of valuable feedback about how visibility and walls might play a much bigger part in towns going forward and certainly showed us some perilous pitfalls to avoid.

When designing an overhaul as big as this, and I can’t stress this enough: testing is vital. We learned so much through blocking things in and just trying a bunch of different shit. How NOT to use cover. How big and wide things should be, how much density we can really get away with. How much pre-placed cover makes sense. I don’t know that I would be so confident in putting it all together today if it wasn’t for these prototypes.

Finally, the town revamp. This very task was mentioned to me in passing 1 year ago when I was just fresh meat at Clapfoot. This has been a very thrilling assignment for me. World building on this scale within Video games has always excited me. Starting out, there were so many things to consider, especially since I was adding to an existing world and not just building something from scratch. Let's start with scale.

Scale in Foxhole is a tricky nugget to tackle, because Foxhole's identity is on a spectrum between top down Real Time Strategy (RTS) games and real world reference. As with most 3D assets, I started with a block in model with realistic proportions and scale and worked backwards.

At first glance the realism looked great, as a team, we thought that it captured the look and feel we were trying to create, but after a few tests we soon came to realize that the realistic look actually lost some of what makes Foxhole special. We realized we needed to take a step back towards the RTS scale, we realized that not being able to see large parts of the battlefield from a tactical perspective didn't really give us the feel we wanted, it looked nice, but didn't feel like Foxhole. We went back to the drawing board and made some adjustments. We knew the scale of the buildings currently worked in game, but how could we maintain that feeling and still give it a fresh look? With these factors in mind, we tried a few more versions and finally settled on having height restriction for the new buildings. 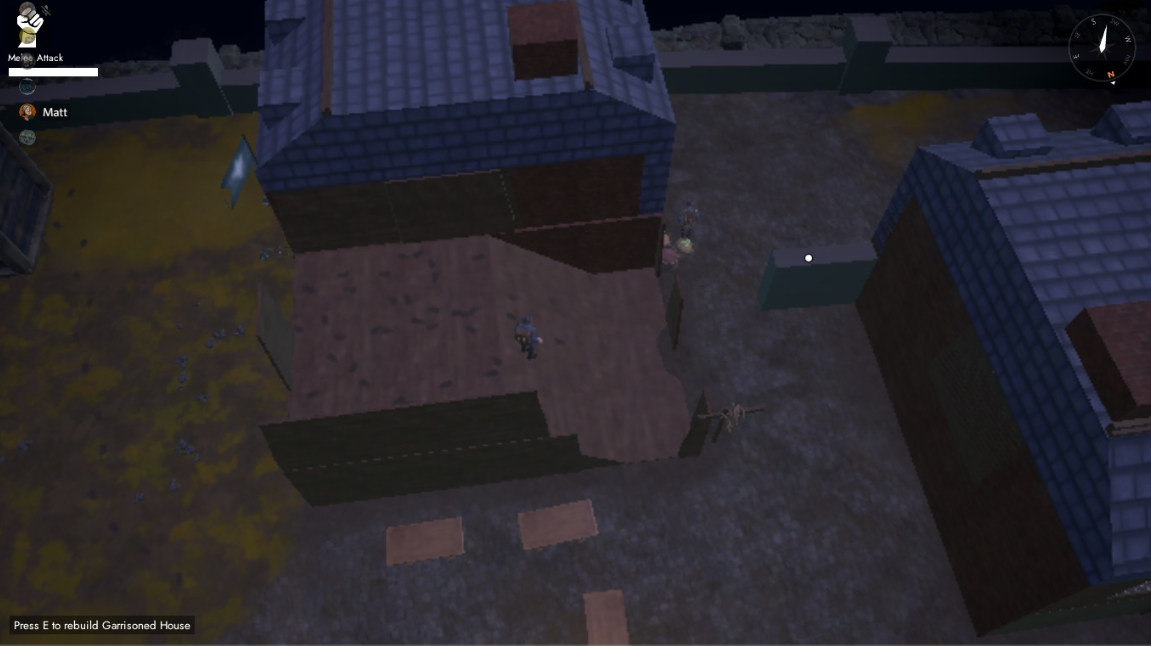 With the building heights locked down, I then moved to the actual scale of “objects” in relation to player character, things like the bricks on a building,or the size of a cobblestone rock. This is called texel density Lets say You are running passed a red bricked building, those bricks should feel and look like bricks. In reality, Bricks have clear features that we can identify. We needed to describe and define these features for Foxhole, essentially What does a brick look like in Foxhole?. We have a running gag around the office, When someone asks for feedback we often tell them to change it by 10%, Funny enough, this is actually good advice. We’d start with real world scale and just shrink it by 10% to make it feel like Foxhole. Without this scale down we found that the environment was becoming very noisy and over-saturated with detail and repetition. We want to manage how much repetition the players see.

Repeating ground textures have often been a pain point for us. We referenced many European cities throughout our development, they all have a particular look and feel. Often they are made up of very small rocks and we wanted to capture that look. We needed the ability to mute the noisiness of the texture, so we used dirt and mud to mute the stone pattern and give the eye a break. Coming into the project Adam, Julian and Matt all had a very clear picture of the end goal for the visuals of Foxhole. We knew Foxhole wasn't a realistic game but there certainly were realistic elements to the game. Pulling reference from beautiful paintings of huge battles, we incorporated a painterly style in all our textures. This was a fun exercise to tackle especially since we use Substance Designer here at Clapfoot. Designer is a very powerful tool and very good for creating realistic textures, But we had to be clever and discover a way to make an object feel more "painterly". We solved this by literally making brush strokes from Photoshop, importing them into Designer. and using them for our base shapes from which we build all complex shapes like bricks or stones. This technique has so far been applied to all the new textures in Foxhole and helped to create a unifying look to the land of Caoiva.

Last week I discussed how early on in the process we made it a point to have a well defined set of goals for the town revamp. We learned long ago as a studio that goal setting was vital for any project, feature, or development task.

Long before we began the revamp process, Matt and I had some motivations that we often discussed at the brainstorm level. We knew that the towns had to adhere to the theme as well as the characters and vehicles did and we also knew there were some recurring thoughts on how immersion and gameplay could be improved. It’s was easy to get excited about individual ideas, but we had to translate that excitement into solid goals on paper.

We settled on 3 major goals:

The slide above shows some of the initial ideas we had for features that we thought would help us reach our goals. Some of these features have been modified since and others have been added. During the prototype tests we ran over the summer, we measured the results against these goals every step of the way.

Some of these goals have been much harder to achieve than others. As you can tell from Matt and Anthony’s posts above, achieving our first two goals was a constant balance between what was ideal and what worked within the constraints already established in Foxhole. Early on it was easy to just imagine something cool, but we quickly found that certain visual design decisions broke down in practice. Achieving the third goal of making town environments more defensible has been quite a journey. Through this process we’ve played around with ideas like more intricate sandbag building, fixed machine gun emplacements, and other unique gameplay elements within towns. We had to experiment with quite a few ideas, scrapping some along the way, postponing others to future updates, and pushing through some last minute ideas through the development pipeline.

It’s important to mention that while we will be taking a big step forward in fulfilling our big picture goals for the town revamp in 0.20, much of what we are doing here is laying the groundwork for even more improvements in future updates. We’re excited about not only what we’ll have ready by the end of the year, but what will be enabled next year and beyond.

That wraps up another Dev Blog. Be sure to check out our Foxhole Dev Stream for more information about upcoming features. If you have any burning questions you want answered be sure to tweet them to @Matt directly on Discord or Twitter, if your question gets selected it will be answered Live on stream!

Adam transforms and rolls out.