As I write this, I'm still coming down from my high of participating in a small 2v2 Company of Heroes tournament hosted by [BM] and [TD], a couple of newer Foxhole clans. A bunch of really nice guys, let me tell ya! And also: I beat Texas#9884 . That was the highlight, really. He said I could gloat. If you guys see him, make sure you rub it in on my behalf.

Content considered for this Community Highlights was submitted up until Monday, Apr 1, 2019.

The lighting in this in on point. You can see a lot but you do get a deep sense of night and darkness. I love how you can see the outline of the man in the road ahead. Fantastic, really.

You know when you're running around in the wild trying to find a hole in the enemy defences, then you come across a bunch of colonials just chilling by a fire for no particular reason? Me either. In real life, he'd be dead.

Dude your painting is getting better and better every time I see it! Great shading, great drybrushing! Now just add some highlights! 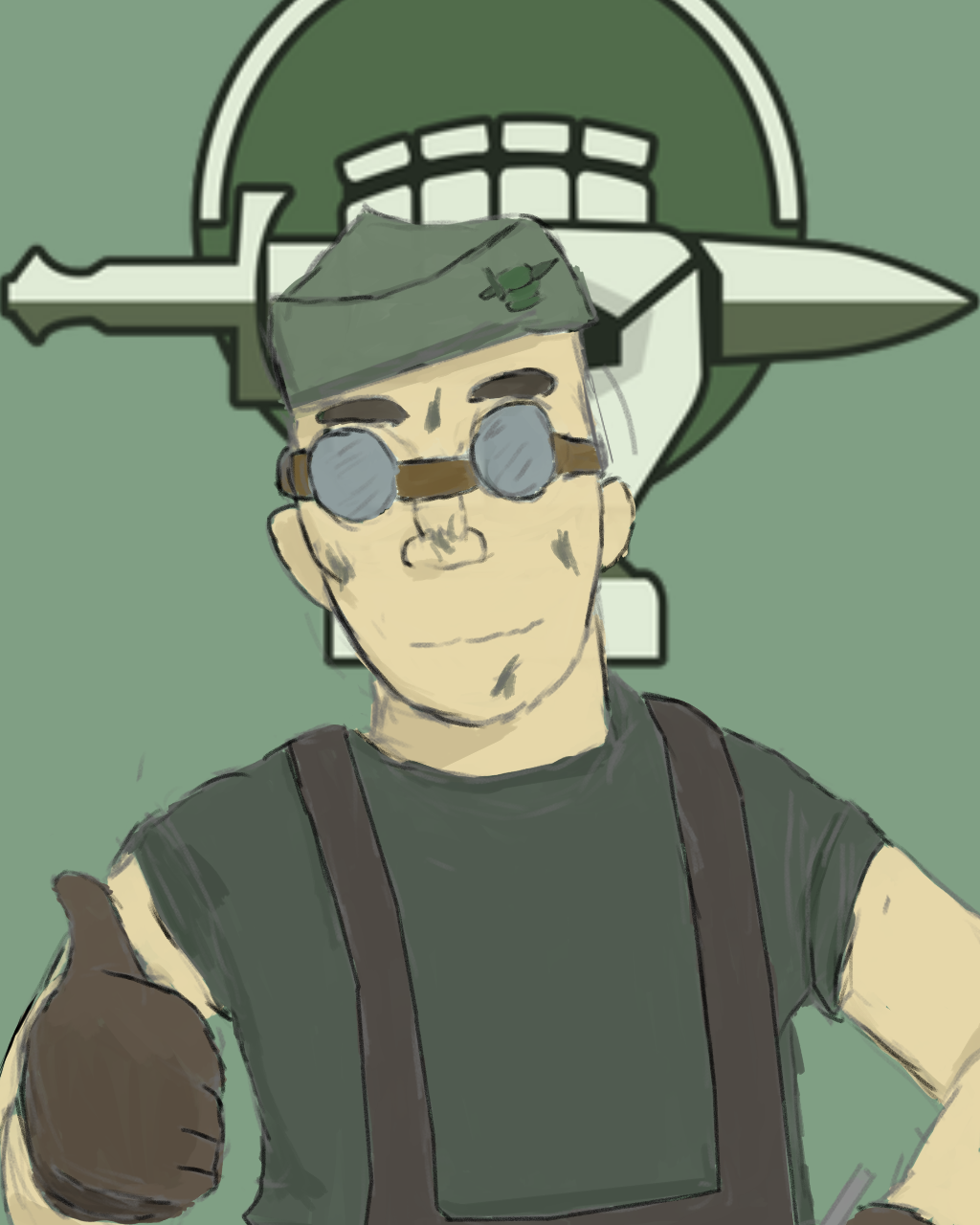 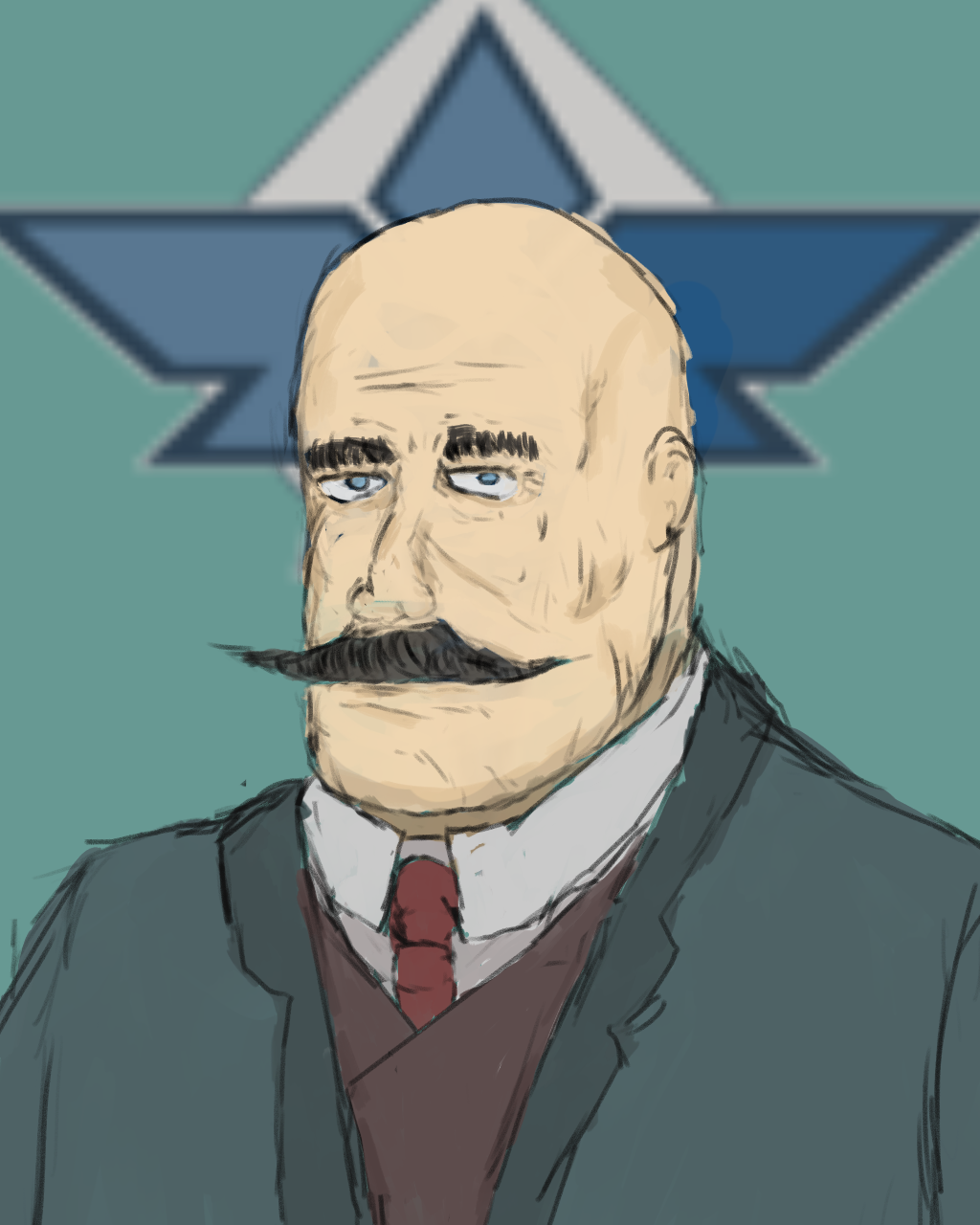 Colonial guy: "The Steadfast Colonial Light Tank "H5" was designed by "a young, talented engineer from the industrialized western city-state of Dimiourg"

Rickery; man you are killing it. I love how your art isn't just one medium. You're really diving deep into the lore and actually placing it in the world. That's so friggin cool.

Nobody wants Trains, Malaran. We already tried to add them but the community was like, "No way. We don't want trains!" I know how you feel though.

This dude looks exactly like how I imagine Lercas to look.

Click the icon to listen to the sound file. Daikyu created this phenomenal Colonial anthem!

These are getting more defined each and every time. Next time though I want you to put a Chicken pinup girl painted onto the side.

I swear i'd seen these before but im not taking any chances. This looks great and pixel art needs more attention.

Man Thea's hair changes colour with every iteration. It better be purple next time.

Exactly how I imagine them. 40 ft tall and wielding swords.

Thea, careful. Your shirt is ripping. Good, there you go. You were making some of the men uncomfortable with that near-miss wardrobe malfunction!

It even has the little toggle to go from Auto to Semi!

Pretty sure I seen this in Company of Heroes. You tryin' to pull a fast one on me man!

With that hole there in front of him, im not sure if man is contemplating suicide, or spelunking.

AND DON'T FORGET YOUR MASK 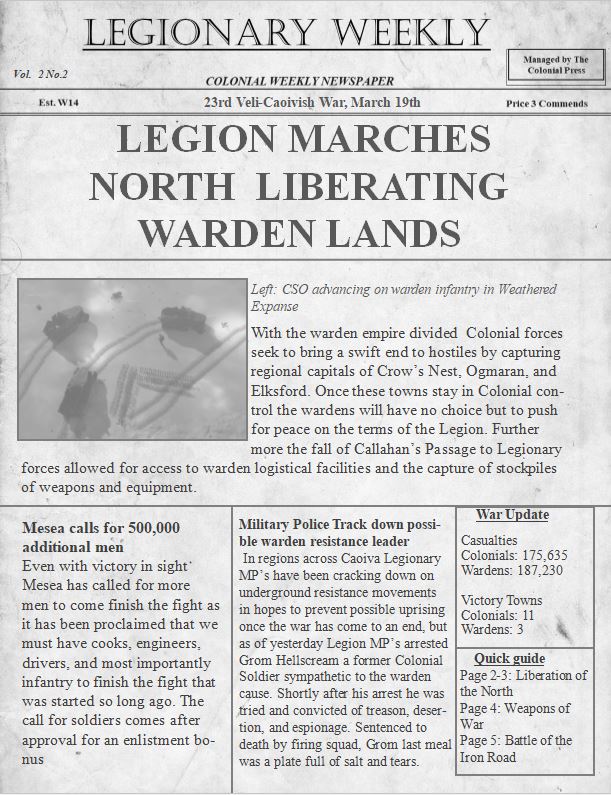 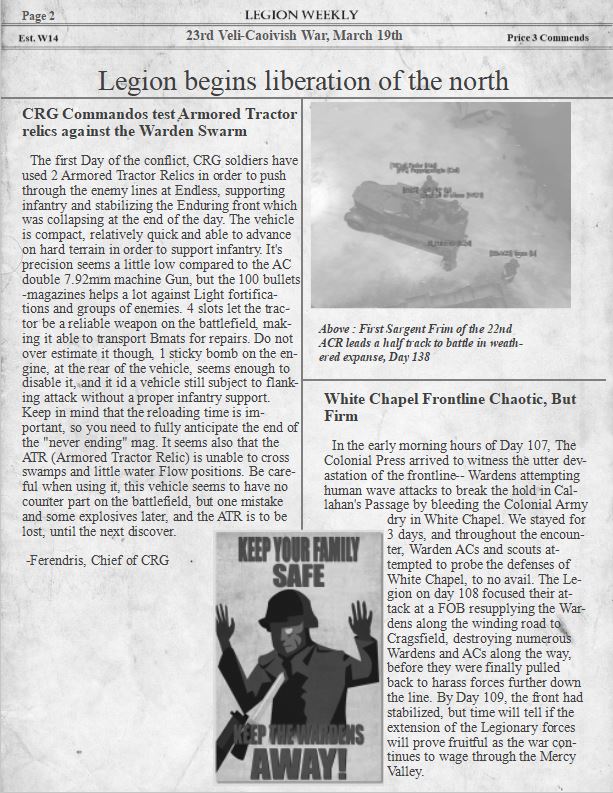 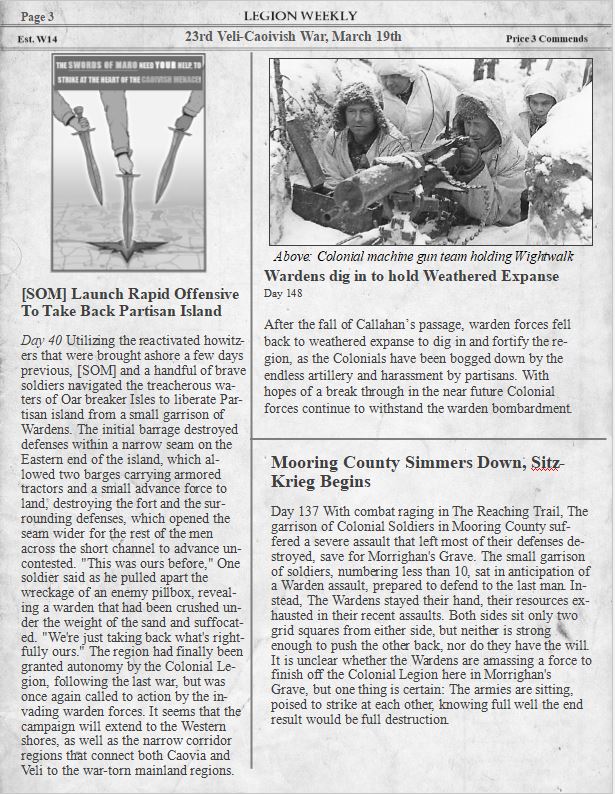 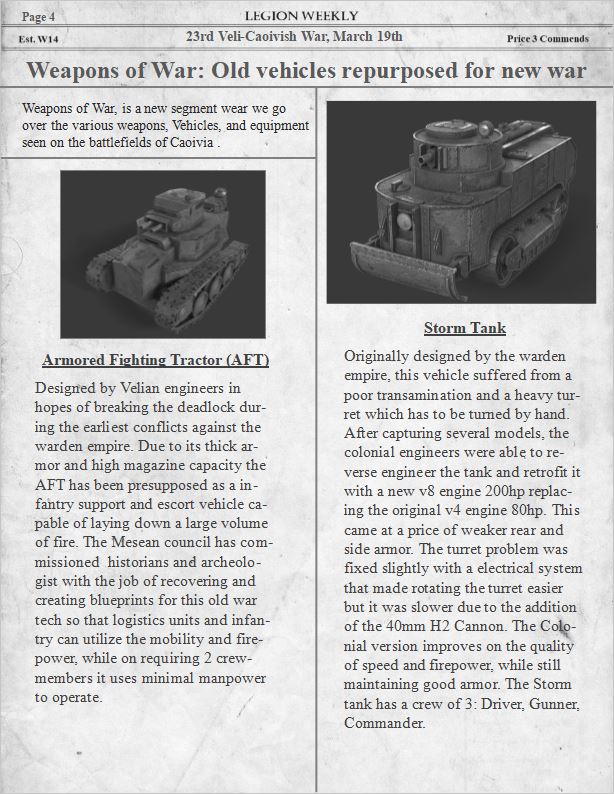 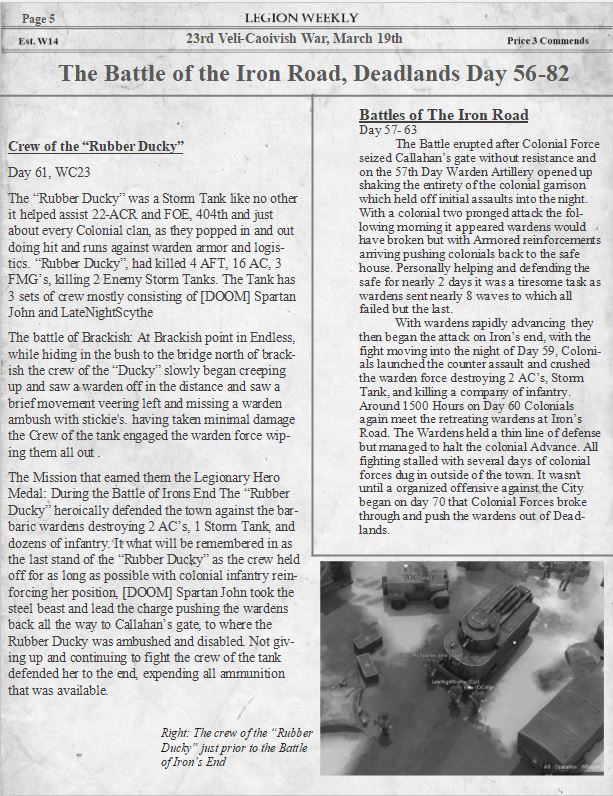 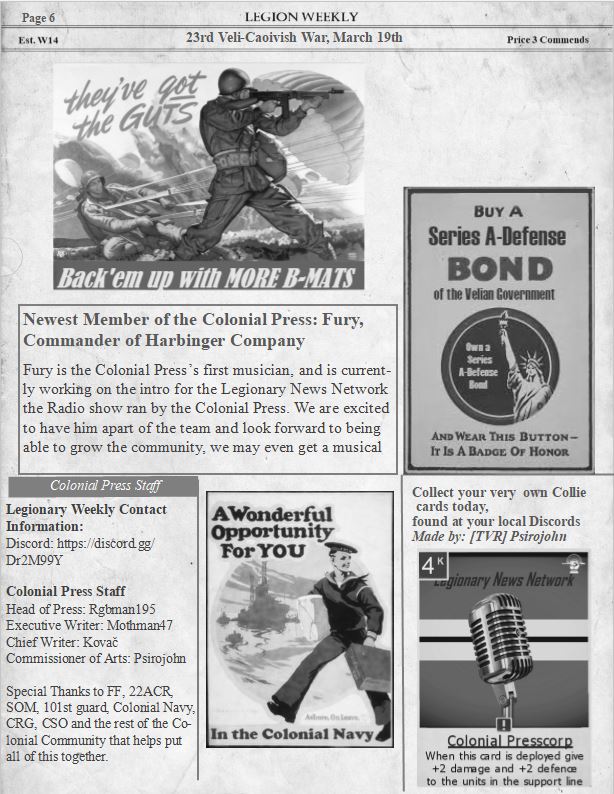 I love the casualties rates. Those better be accurate. 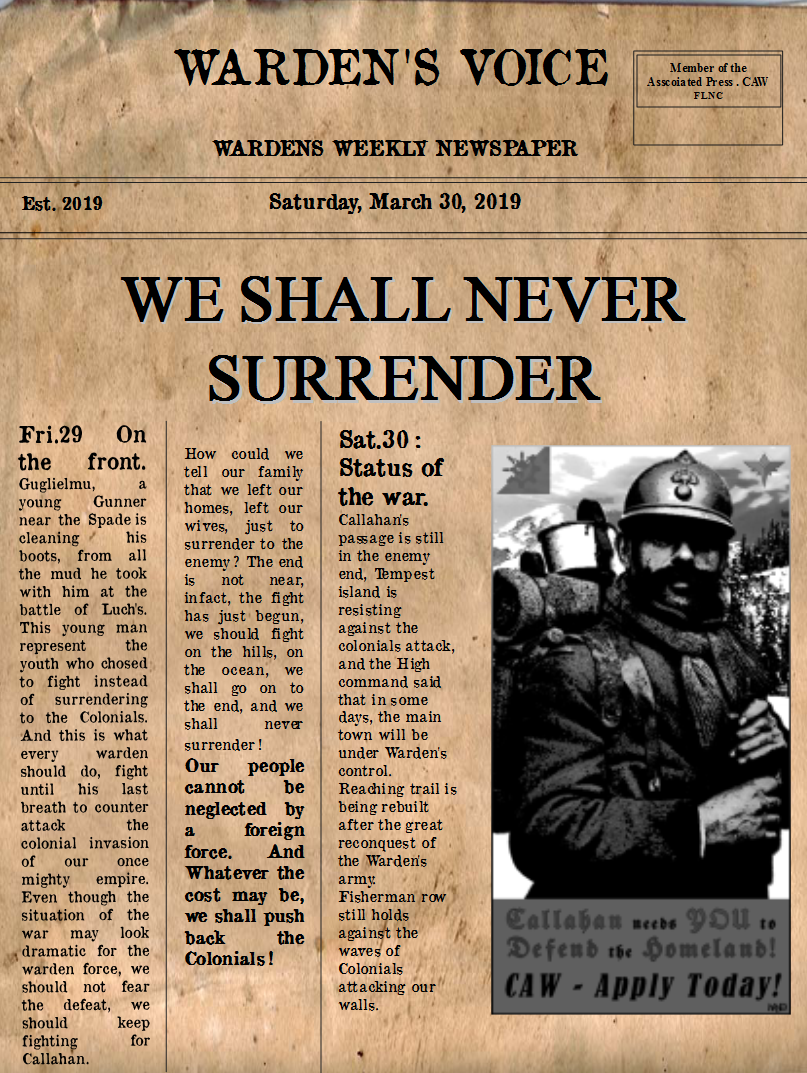 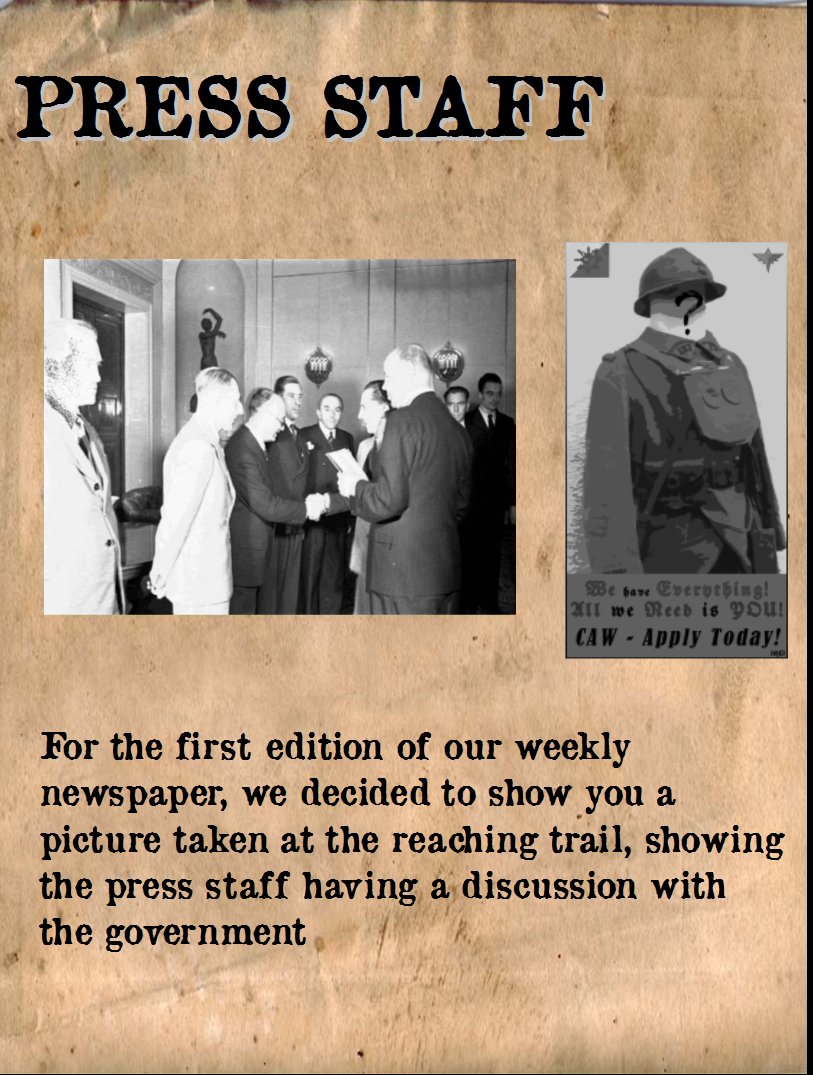 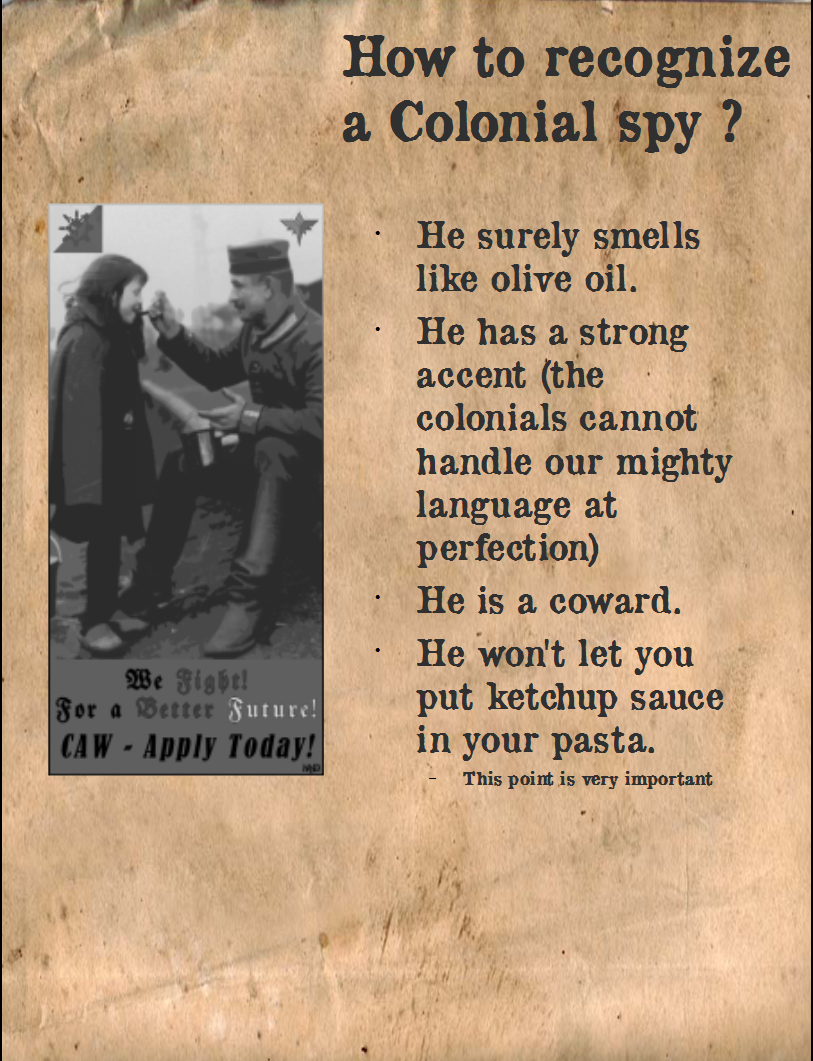 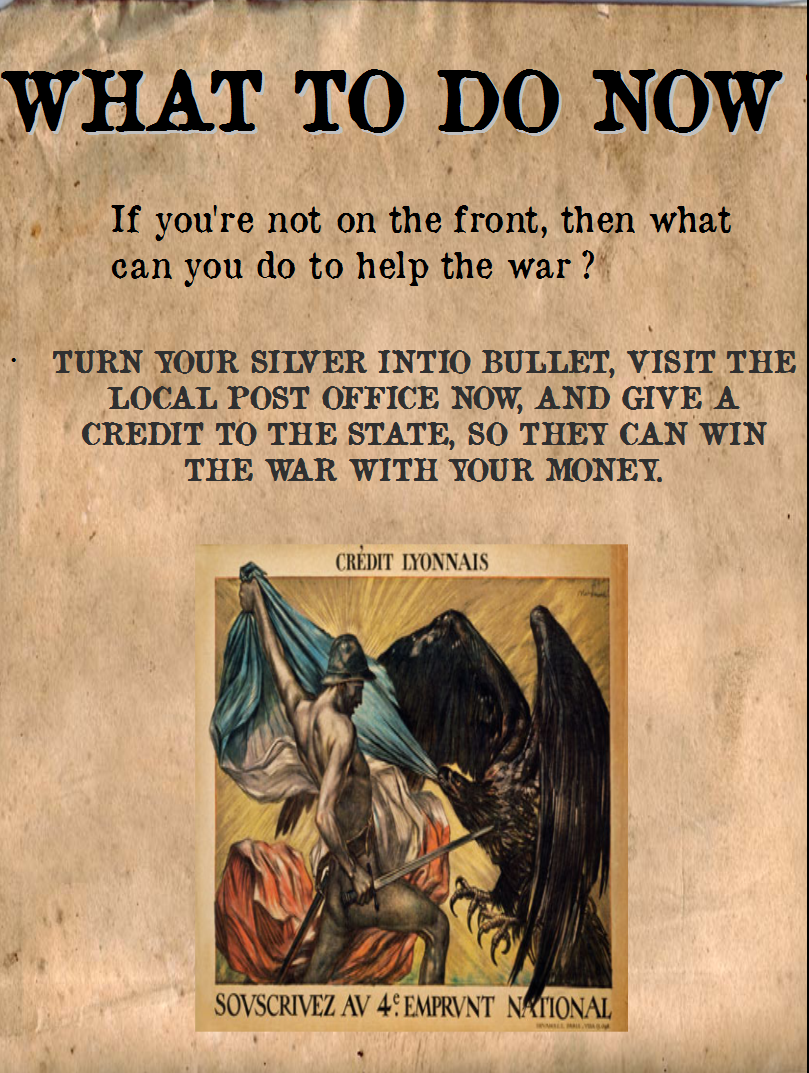 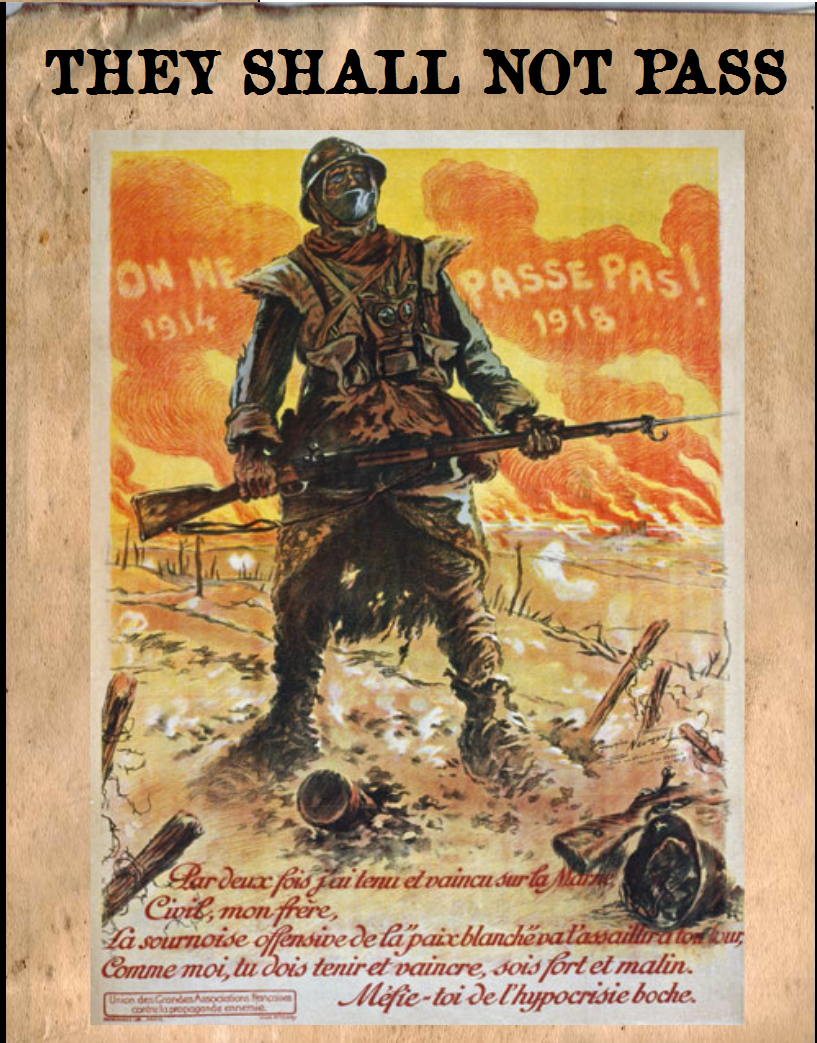 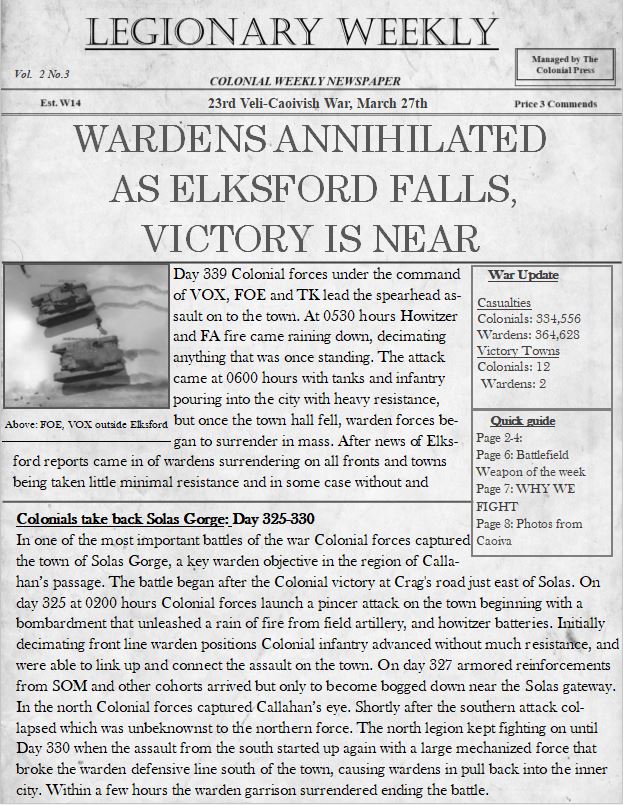 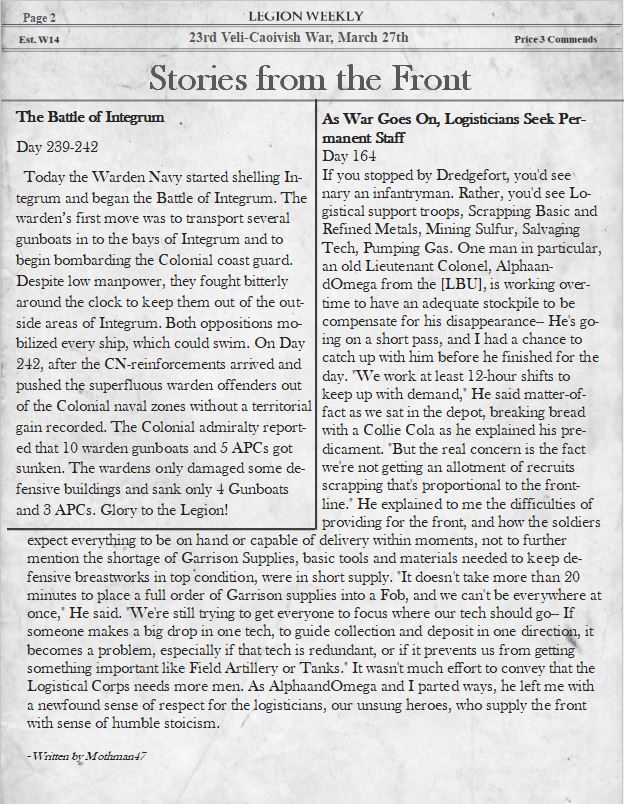 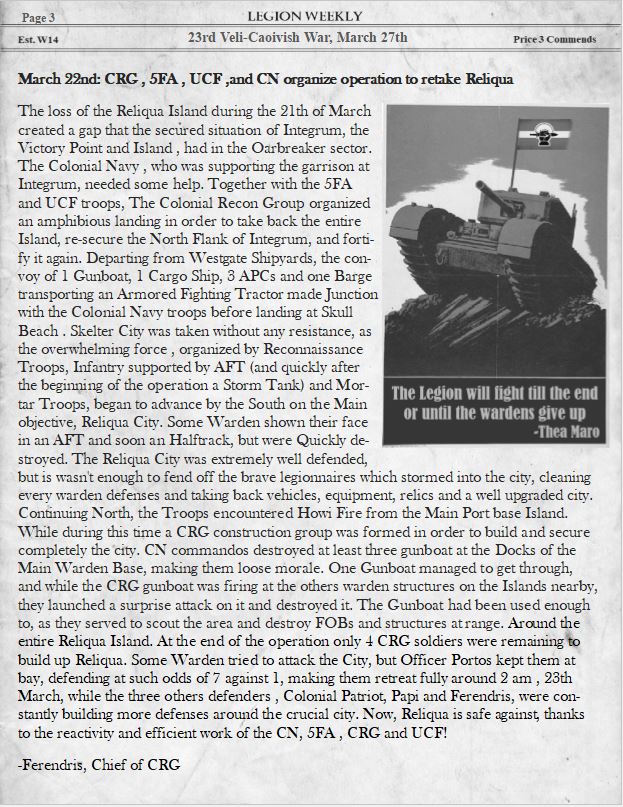 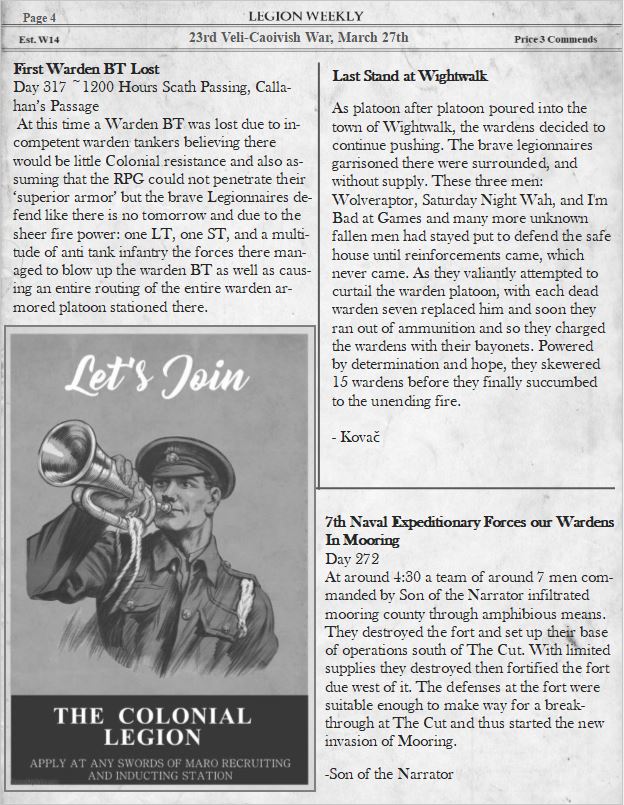 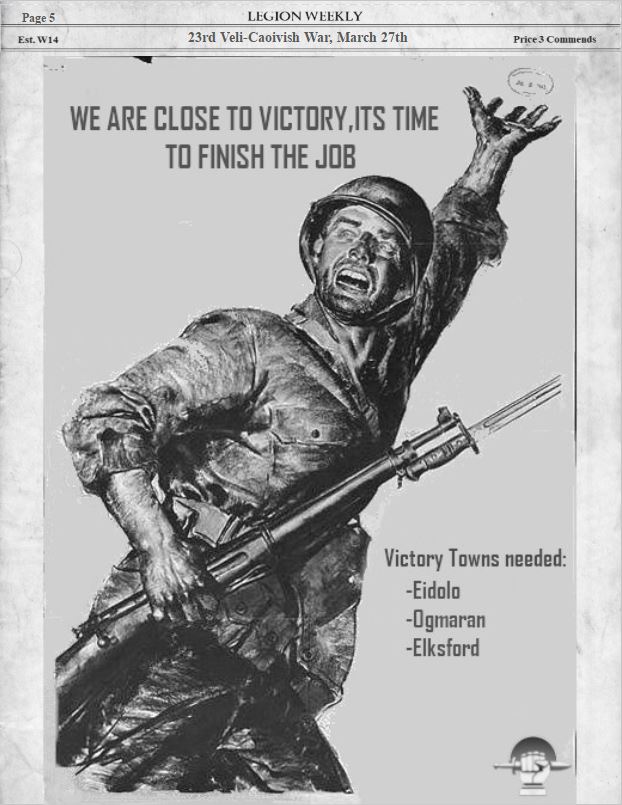 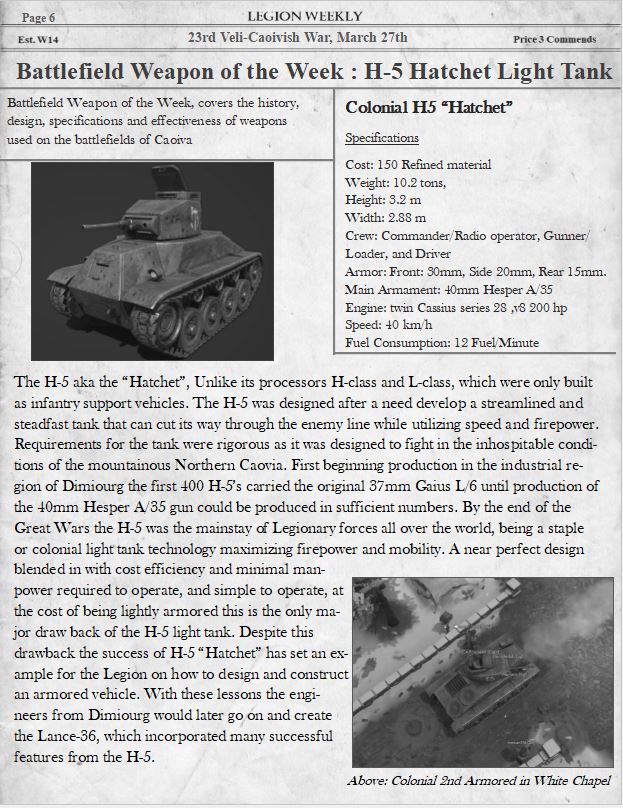 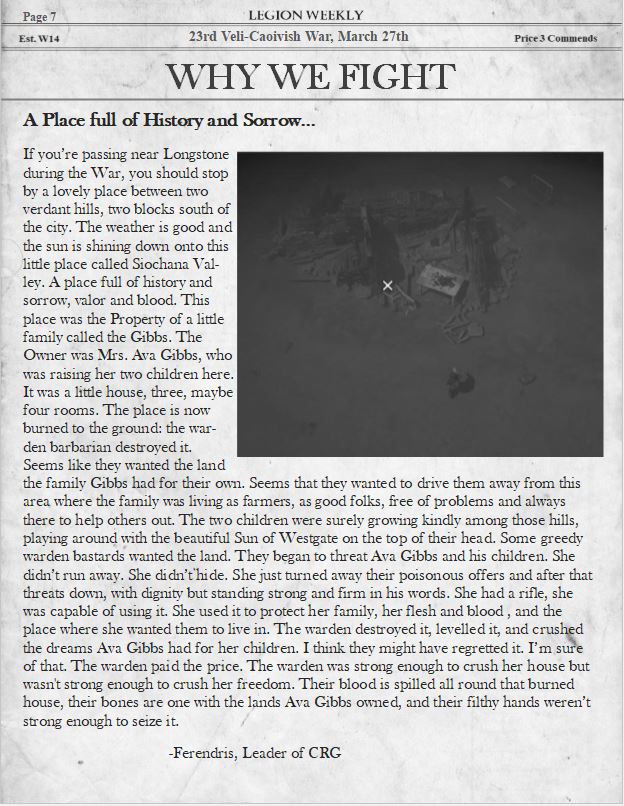 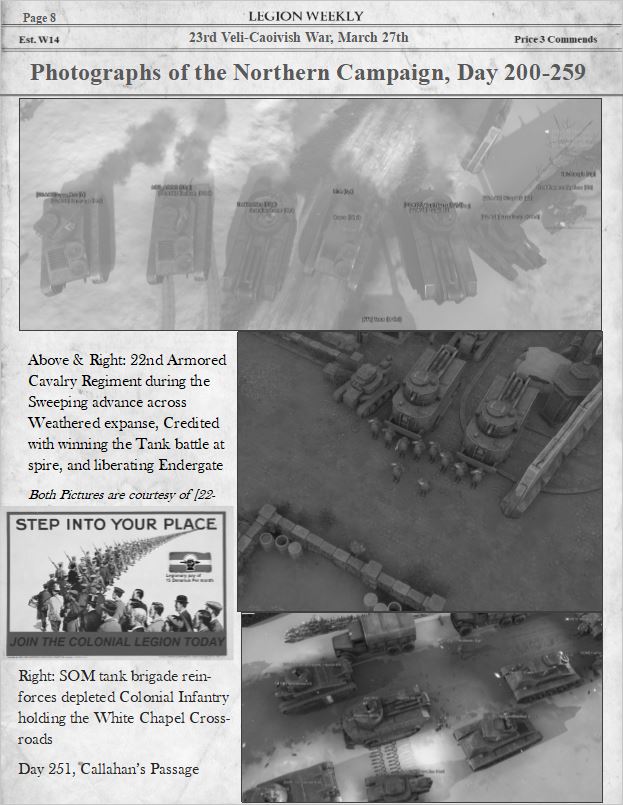 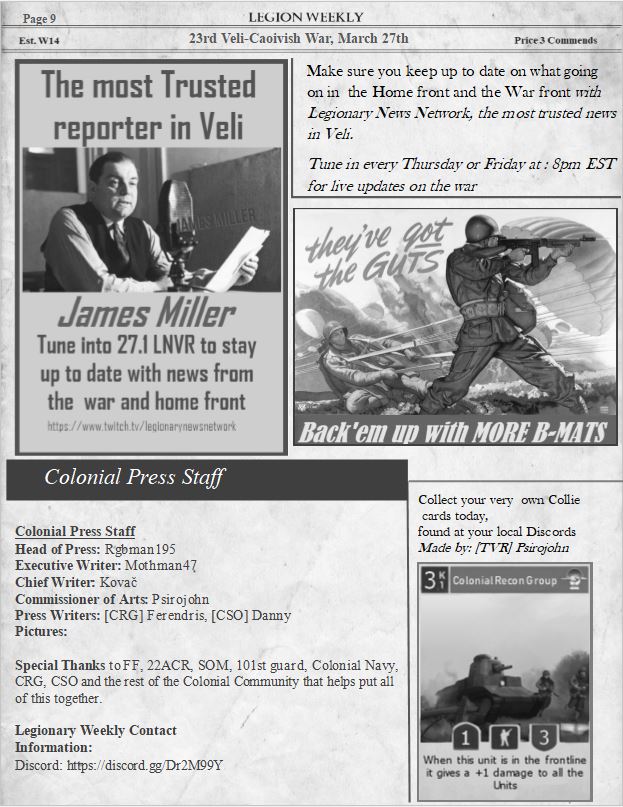 One day i'm just going to print all these.

Watch Bear do everything! Builder, support, medic, sniper, everything!

Watch someone use a halftrack without getting killed!

Wow cool, a battle in Whitechapel. Haven't seen that in ages! Some conservative battle-tank gameplay whilst defending the highground

But only one guy hit you with his RPG. Truth is if even half of them hit the tank you're dealing with an above-average number of professionals!

How do you seem to have no problems making friends with people that want to kill you. It's uncanny.

Good god. You found the one blind gunner in the whole warden army.

Lol, nails him dead on with a tank shell.

I have nothing against Nemesis. Really. He's an invaluable member of this community and an expert player. But for some reason, watching these videos, I find myself rooting for the other team. Like, 'COME ON. HIT HIM.'

I really like this video, more than the others actually. I love the assault on the wall. Like, this is what foxhole is supposed to look like. Even if it is a one-man army doing it, it's really cool to see the tactical movement here instead of the ridiculous dancing he's so famous for

More expert halftrack play. What the hell. Why did we buff these.

Dershneaky mortar team hiding up on the waterfall

Watch as a pair of noobs try to pilot a battletank without a gunner!

Dude, i'm super impressed by the blurring out of the map. Bravo points to you sir.

"Run forward men! Run forward........" yeah. Yeah you need Terran Marine levels of charisma to get people to death charge into a line like that. Don't feel bad. That dude has charisma coming out his ears.

This. This is why Gunboats got buffed.

Saltygrad will live forever... in our hearts.

We got a bus for this now.

Alright. Hope you all enjoyed dem highlights. Please like and subscribe and tweet a reply in the link below!! Check out the patreon for a prize to win a dinner date with the whole gang. Instagram link. Facebook link. And literally none of that. You're welcome.