Remember to get your submissions in for the Art contest. You can read more about the requirements for it by clicking this link.

We had a blast during Castle Clapfoot on Friday. Thanks Caspar and Icanari for putting that together. Next time we do this though maybe you guys be the ones in the moving tin cans getting shot at by everyone and their brother.

Content considered for this Community Highlights was submitted up until Monday, Feb 18, 2019. 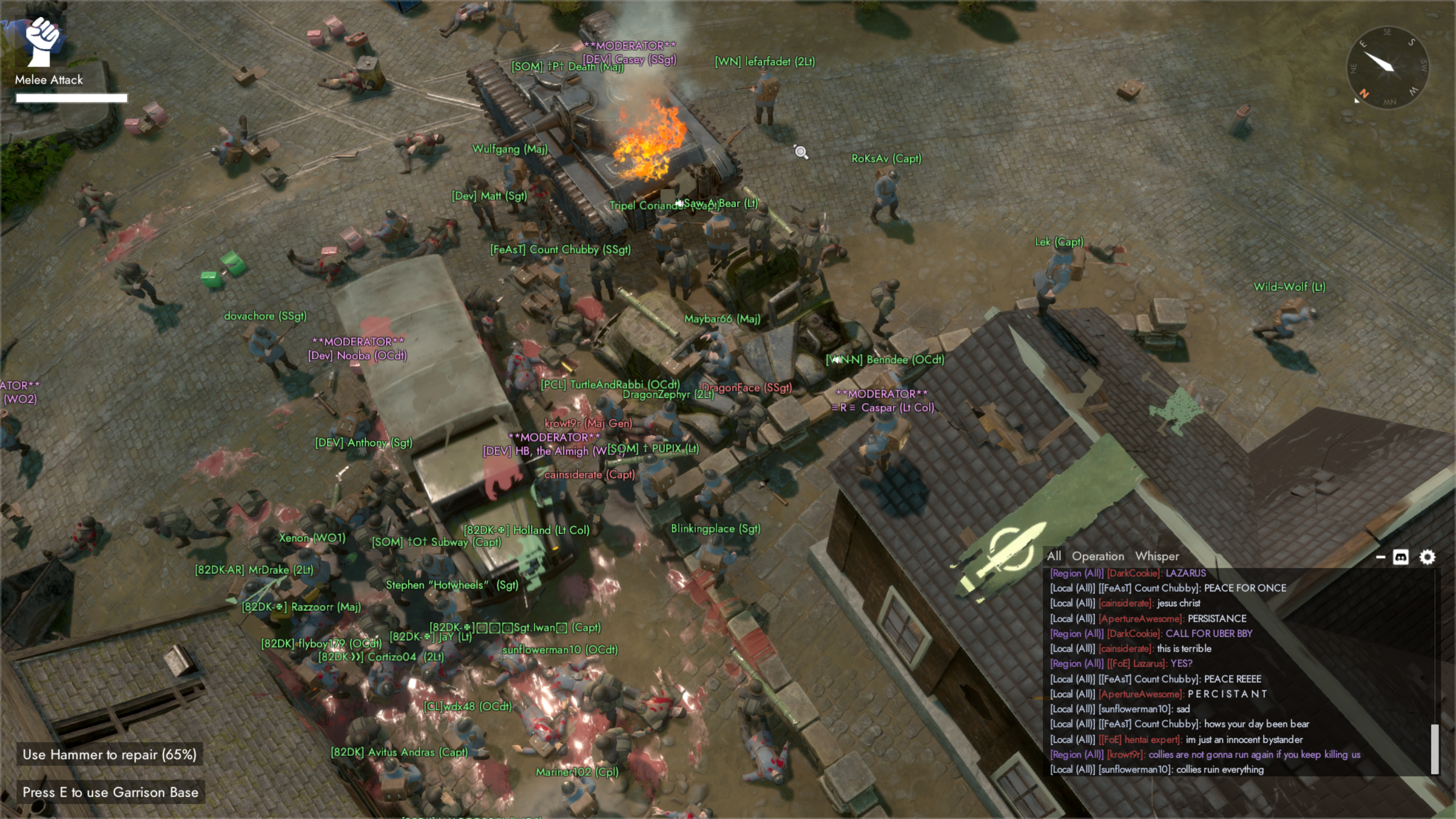 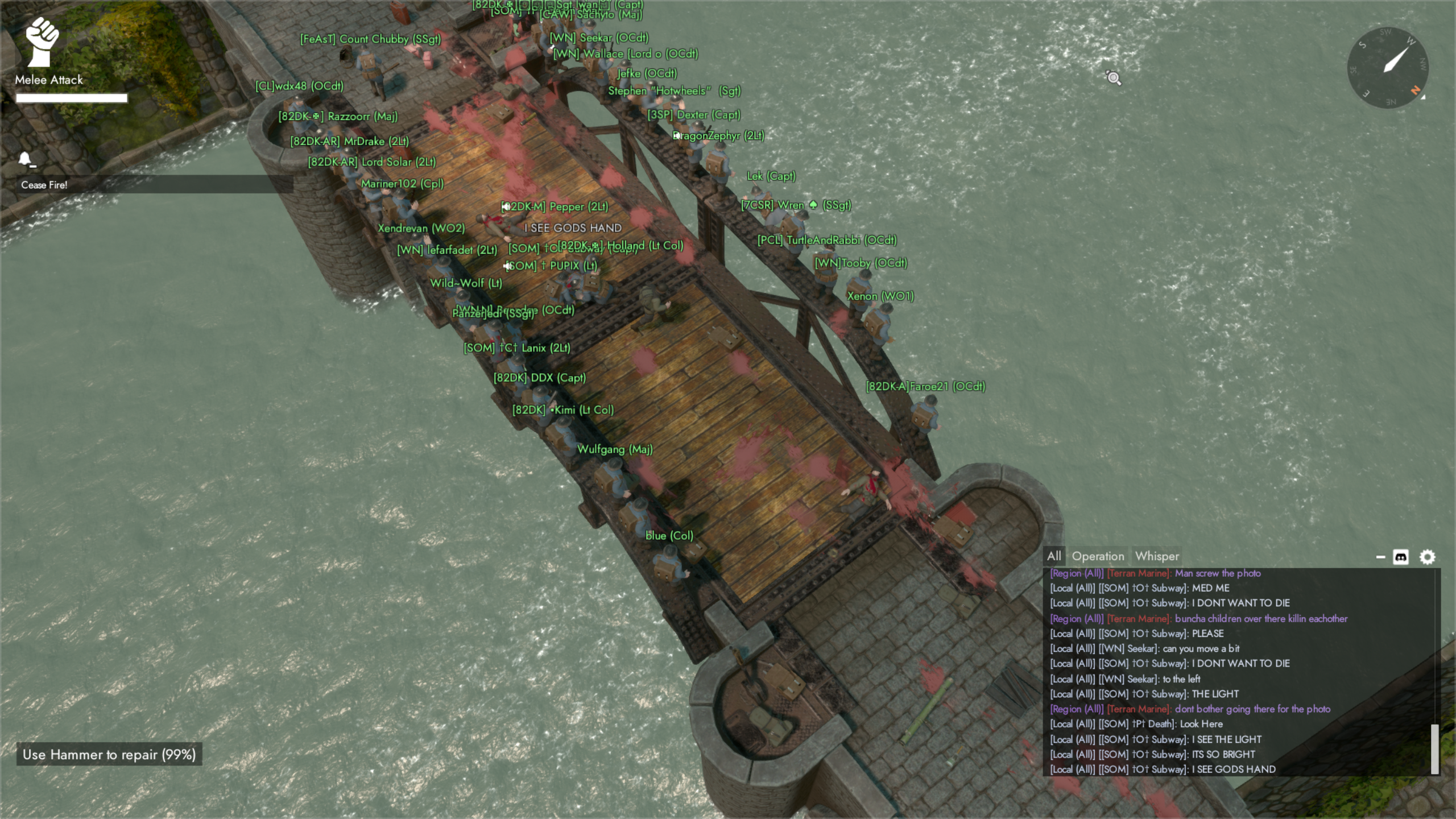 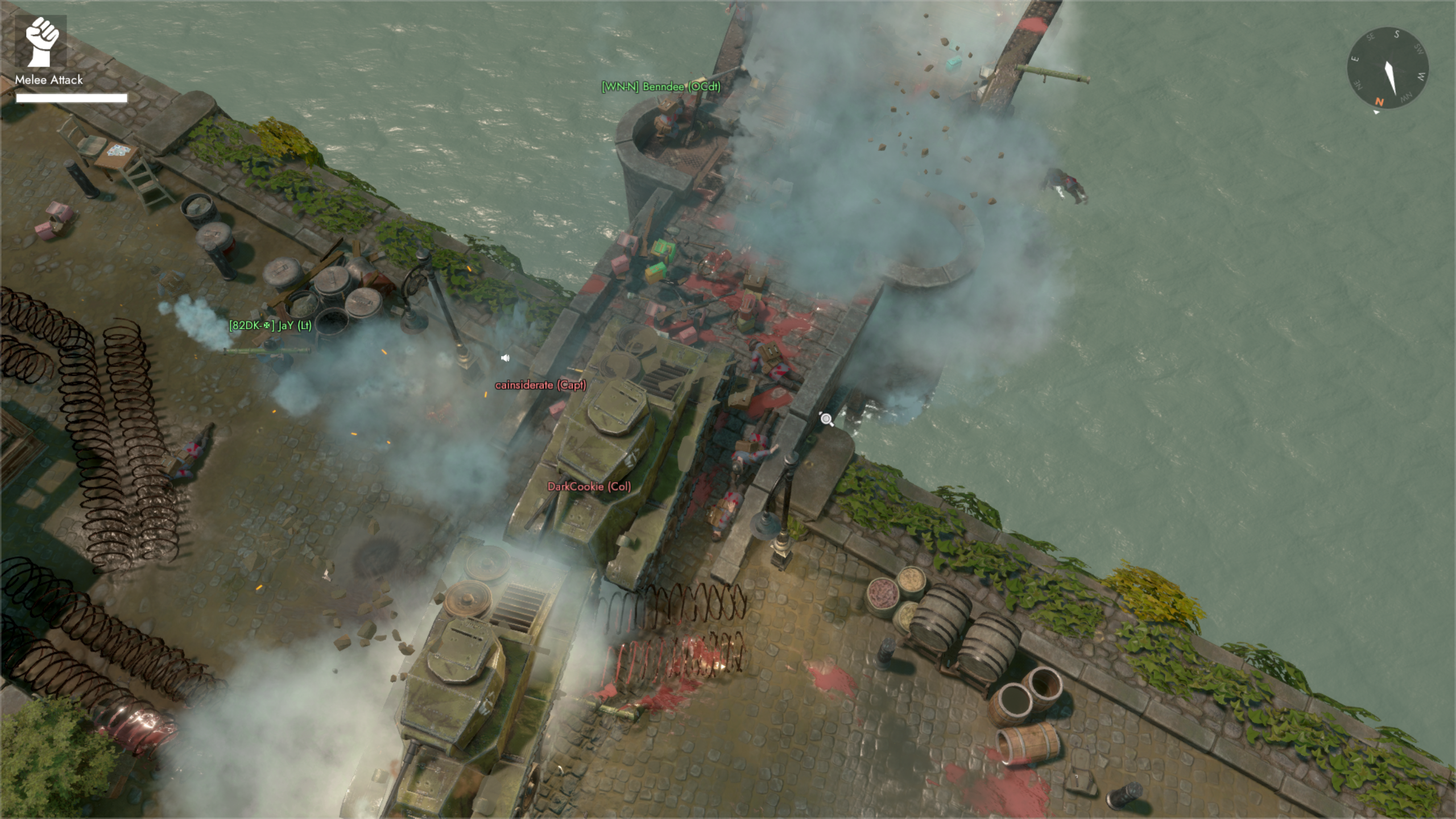 Last friday we hosted a quick impromptu event with those of our playerbase that was on Discord. The event was planned and prepped by Icanari and Caspar. In it, the developers were instructed to hold their safehouse in Jade Cove against insurmountable odds.

With the help of some very dedicated wardens, they succeeded. At least until the rockets started dropping.

Thanks to everyone who showed up. It was tremendous fun for all of us here at the office before the long weekend.

I really dig this style. Looks like it could almost properly fit into the Simpson's Universe.

What I really love about this is that we can actually use this for a solid reference for when we do get around to the uniforms. This is exactly what we had talked about. We want uniforms that never detract from the aesthetic of each faction, while each one still being unique enough to be noticeable. Great work.

Hand these out at every recruiter's station. 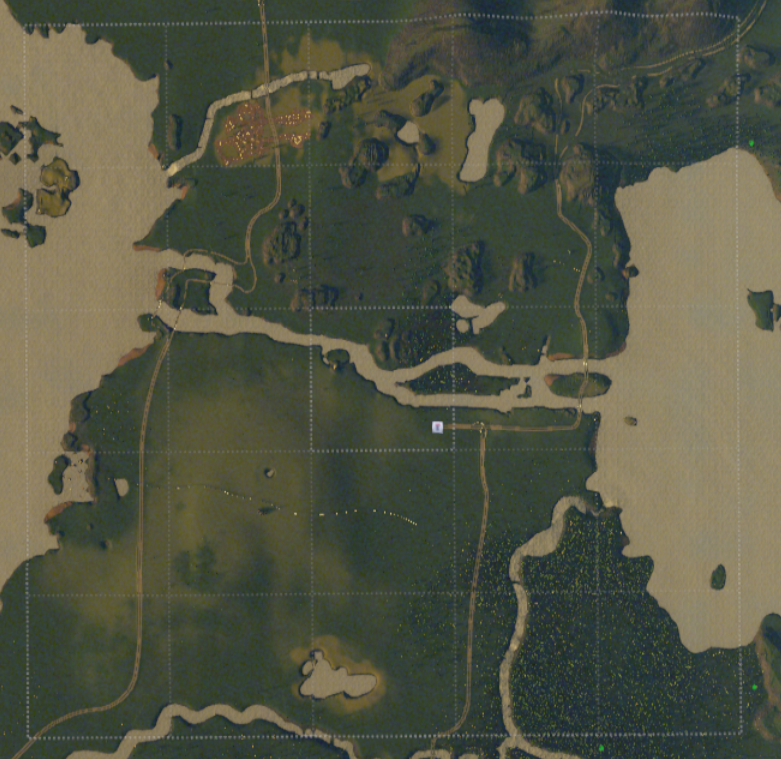 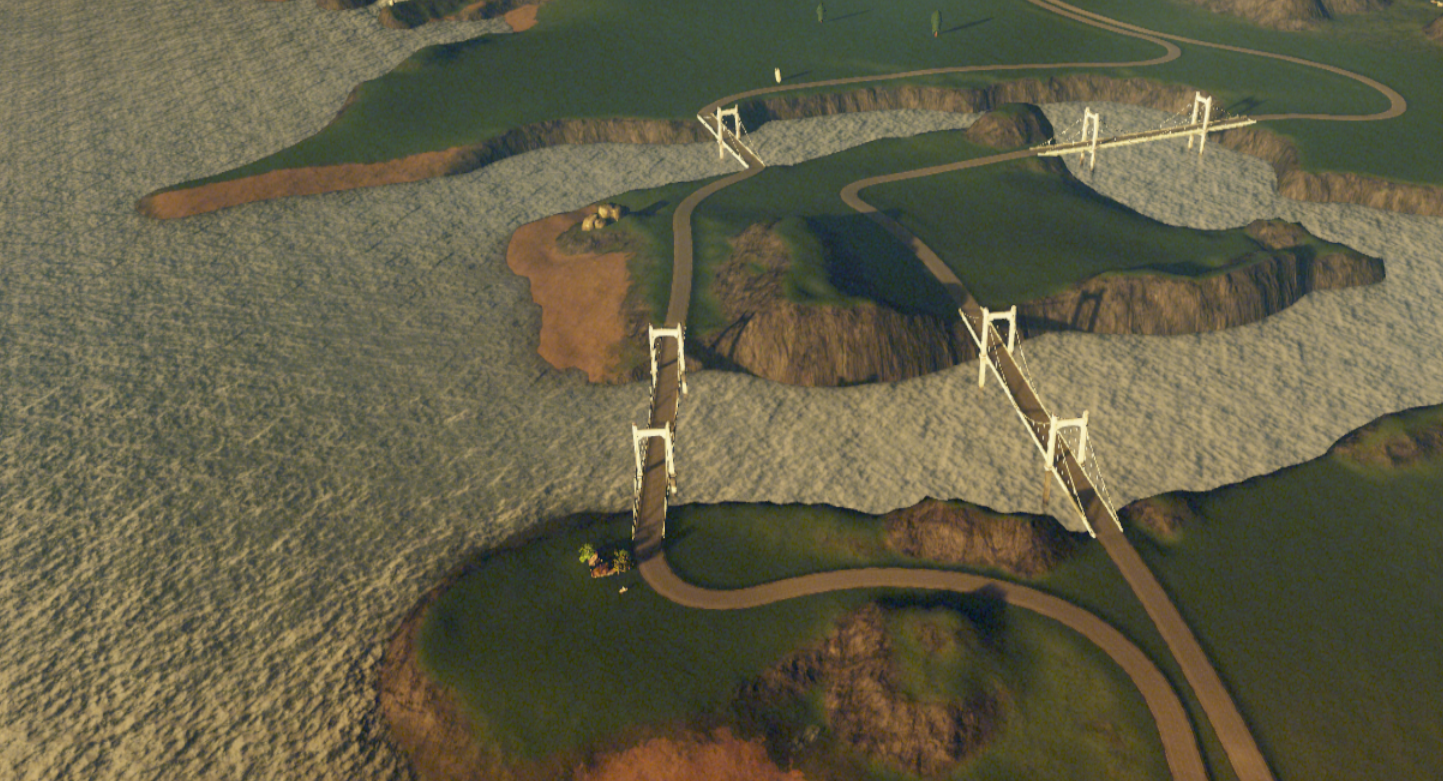 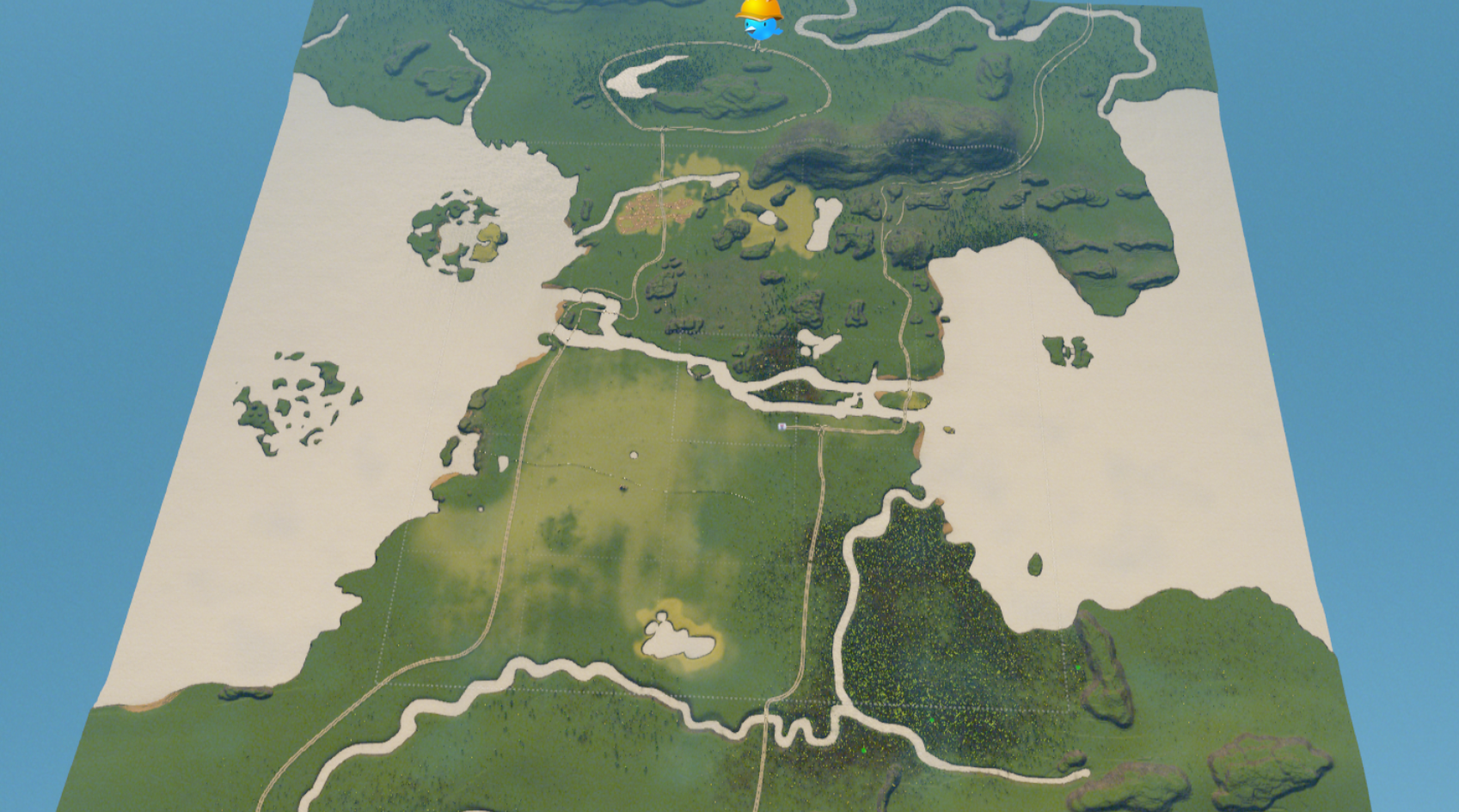 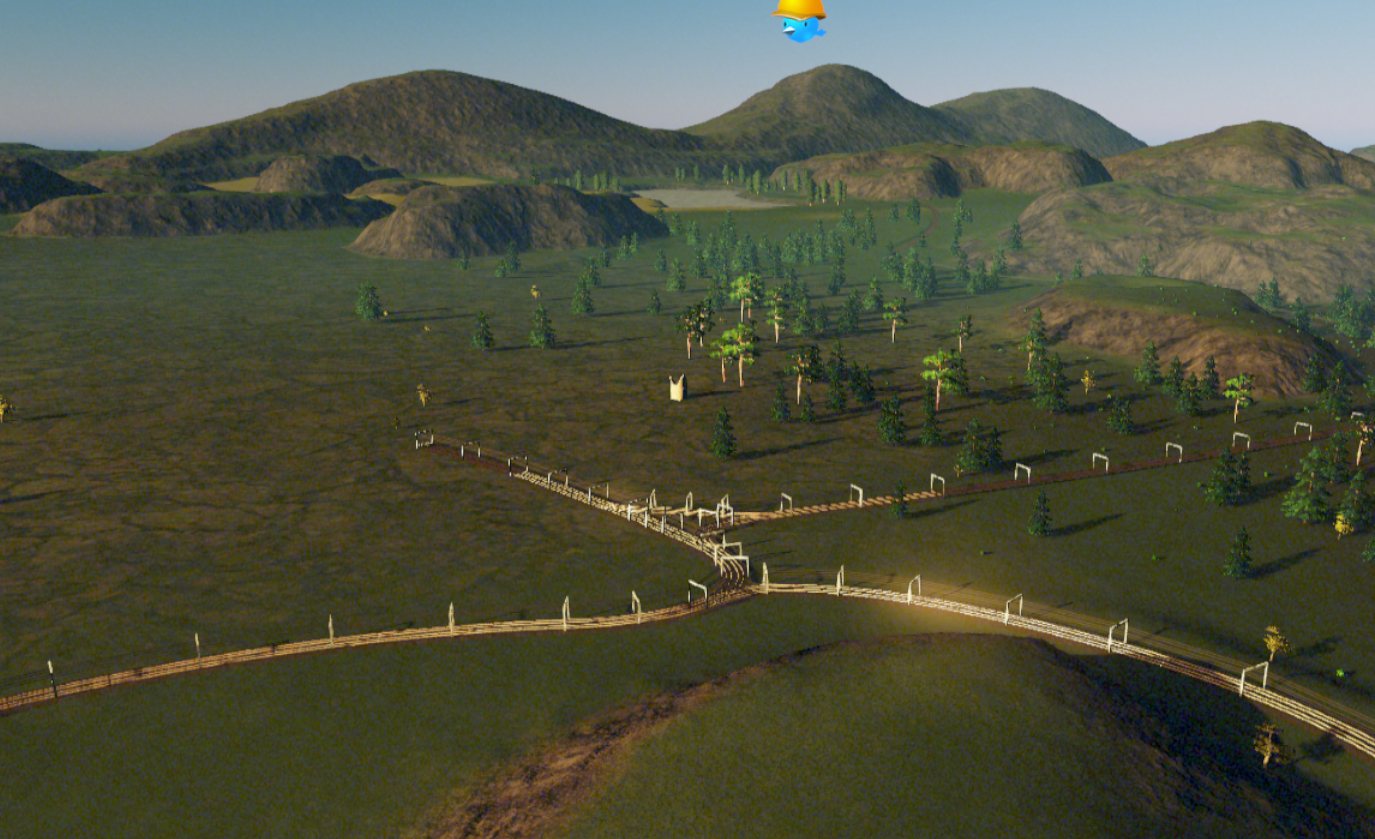 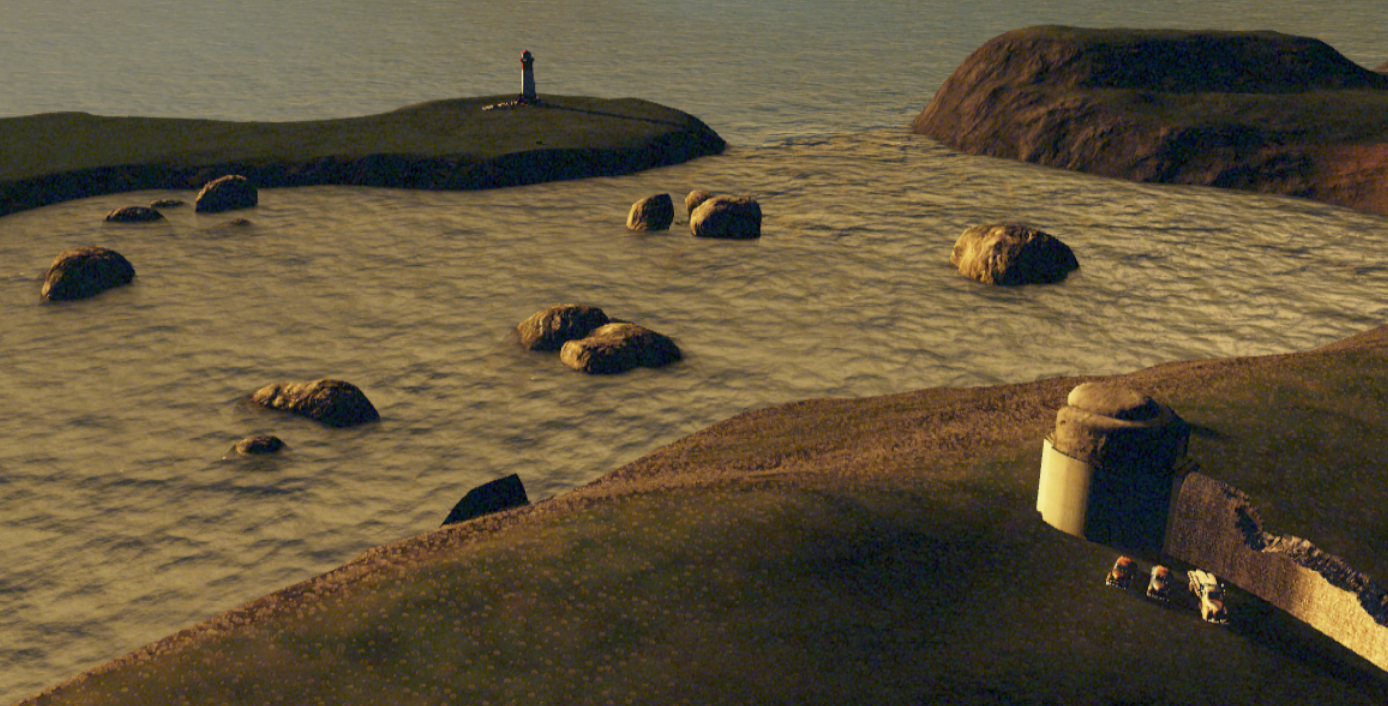 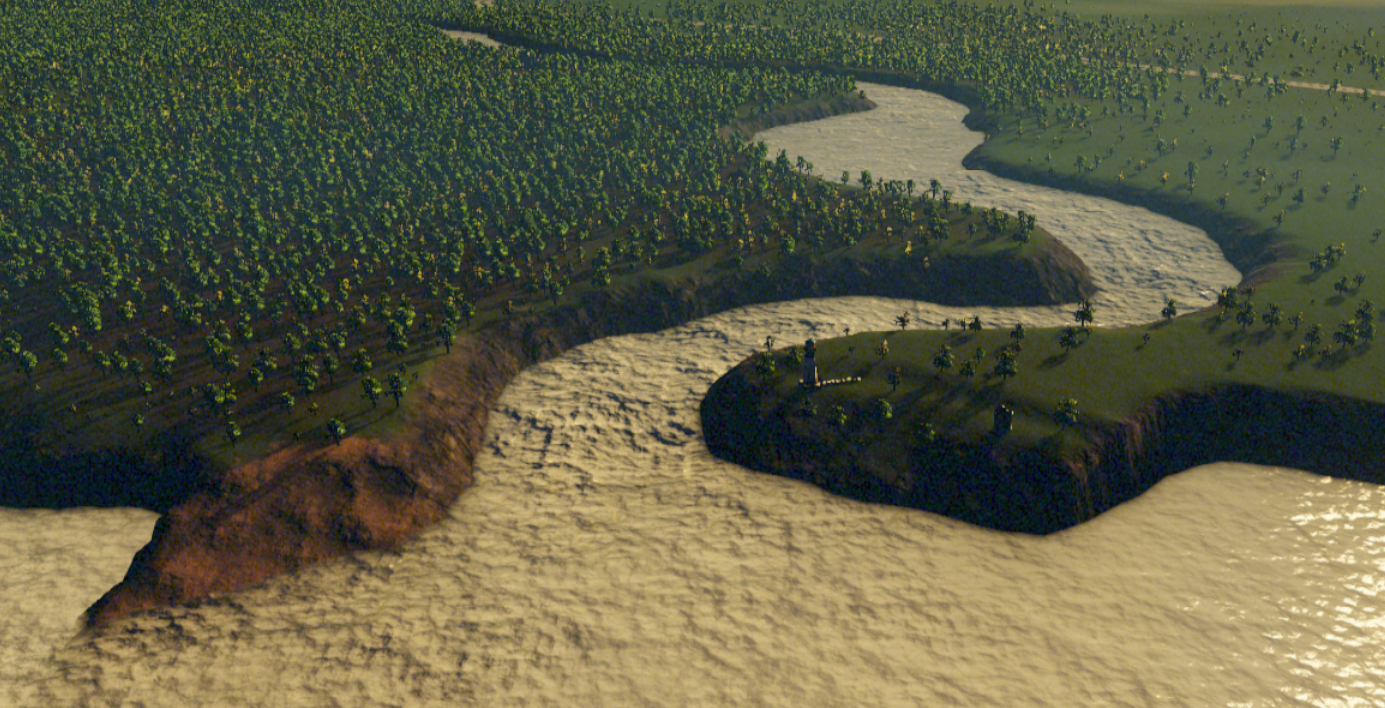 This is the second version of TurtleAndRabbit's Cities: Skylines map of the Foxhole world map. Looking good!

Followed closely behind by the Armoured Fighting Cattle, and based out of the Forward Operating Barn 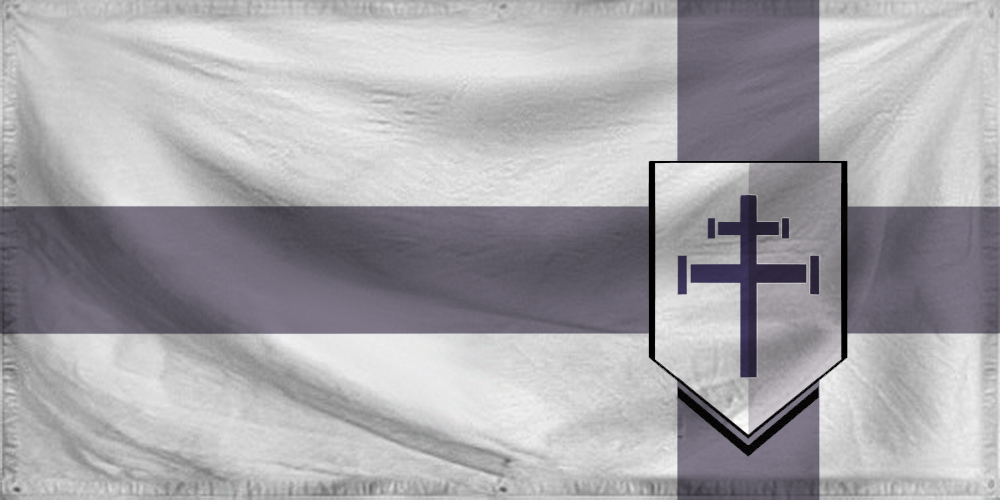 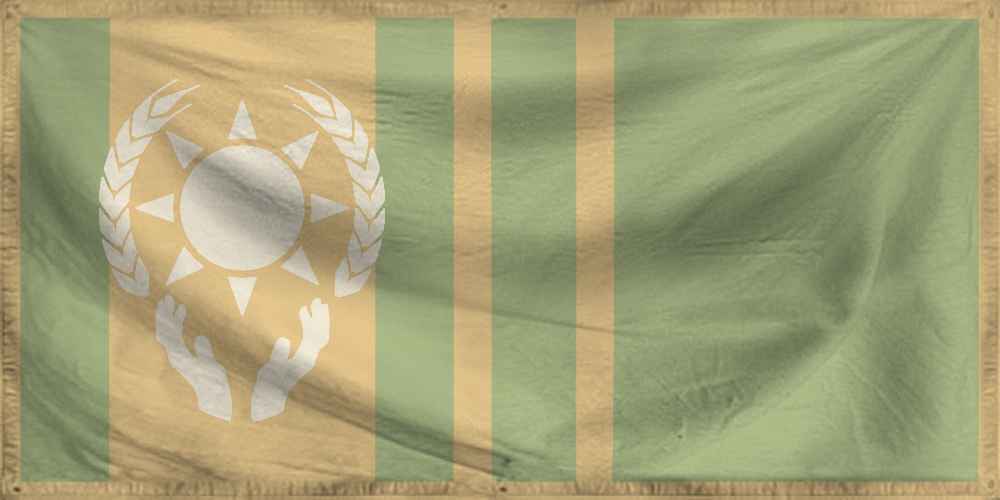 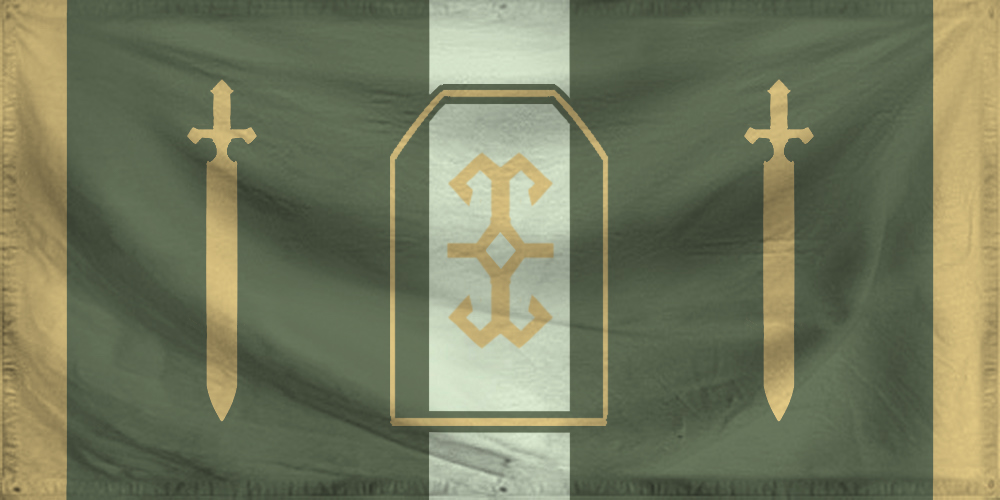 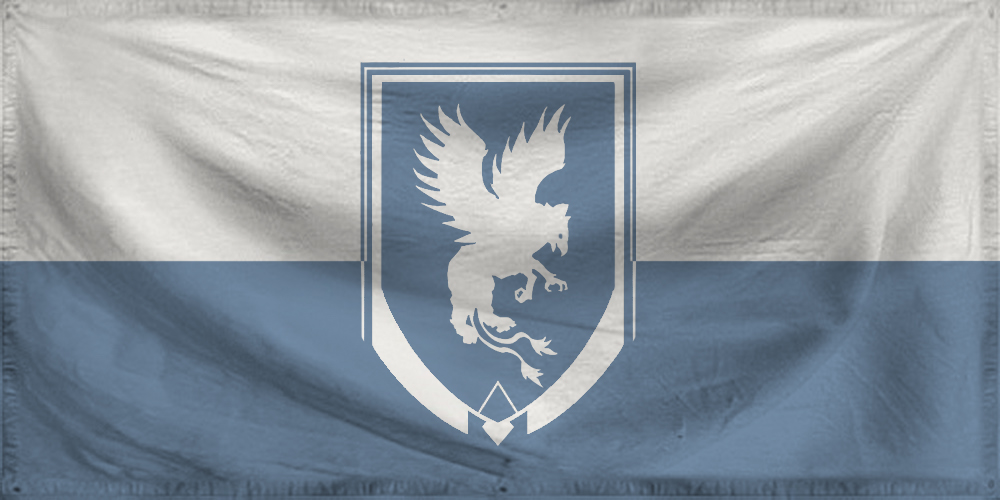 These flags represent some pretty deep lore that very few people would actually know. Whenever someone asks me a lore question, I just point them to Lercas.

By: Lord of the Isles

Lord of what isles though?! You'll never be lord of the Iron Isles. Or Hermit's Rest. 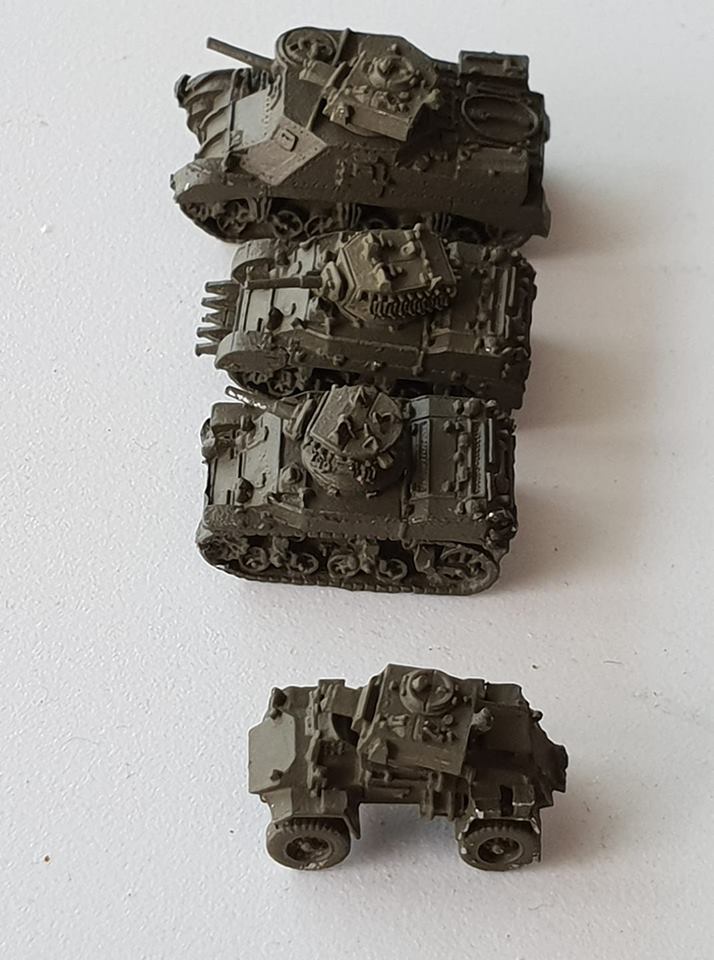 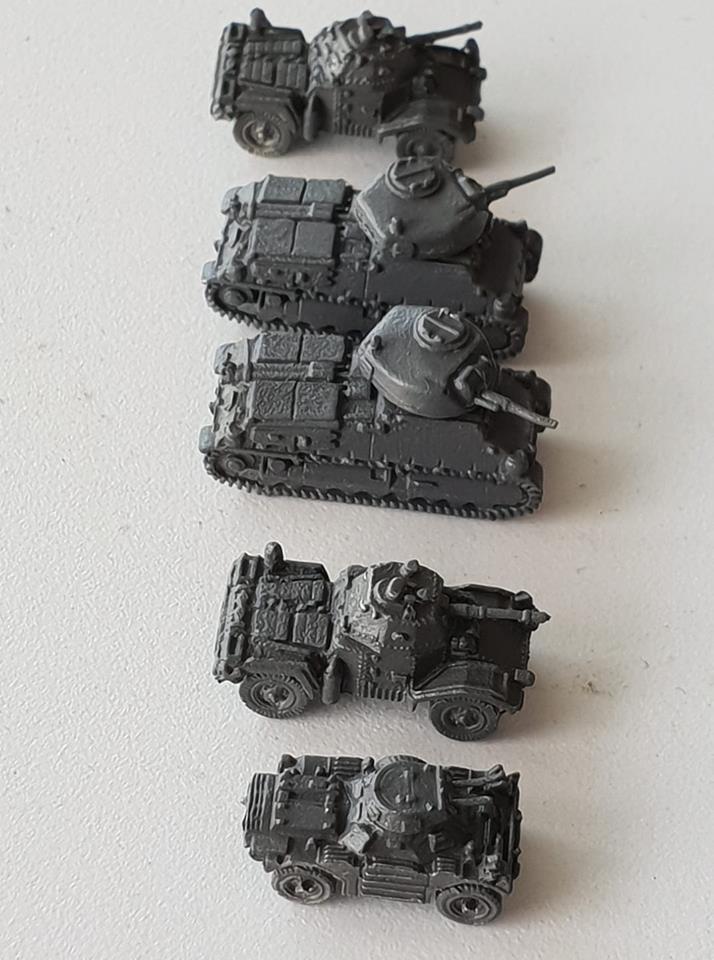 Maaaan this would be a super cool minis game. Like crazy cool. I want to paint these. 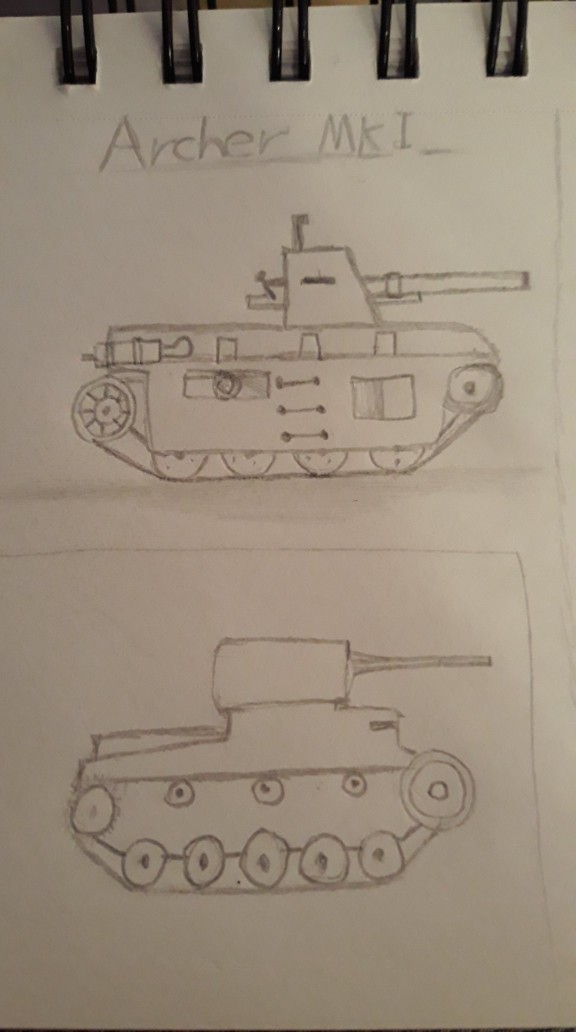 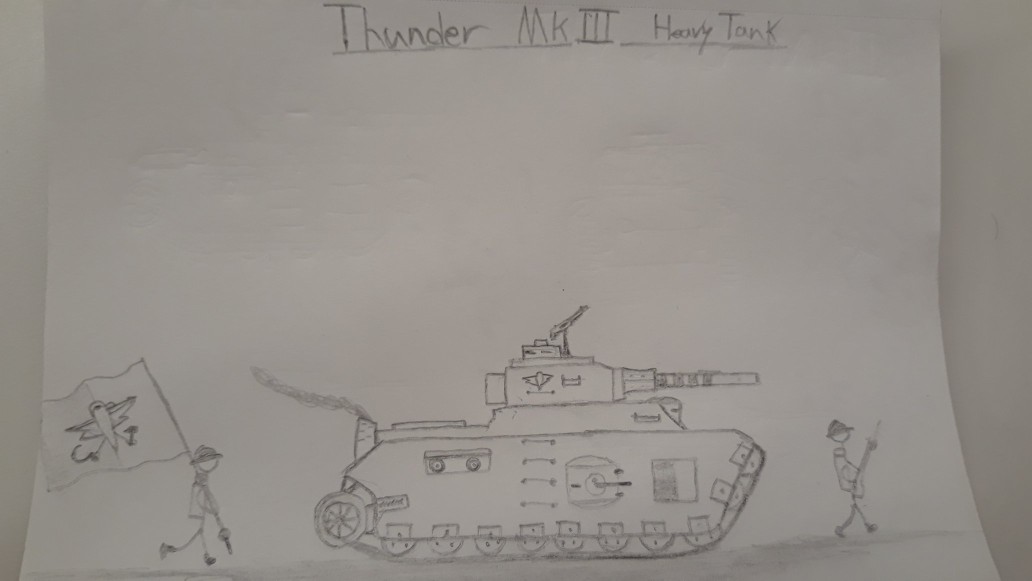 So Trisha sent me this and the first thing I noticed was the hammer and sickle on the warden flag. Interested to know how the rest of you feel about this. Angry? Despondent? Riotous?!

Ahh, a fan of House Baratheon I see. At least it's not a flaming heart. 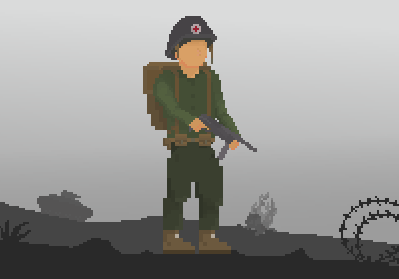 As pixel art goes, this is some pretty high fidelity.

The hell kind of salute is that soldier?!

A little late for halloween my man! 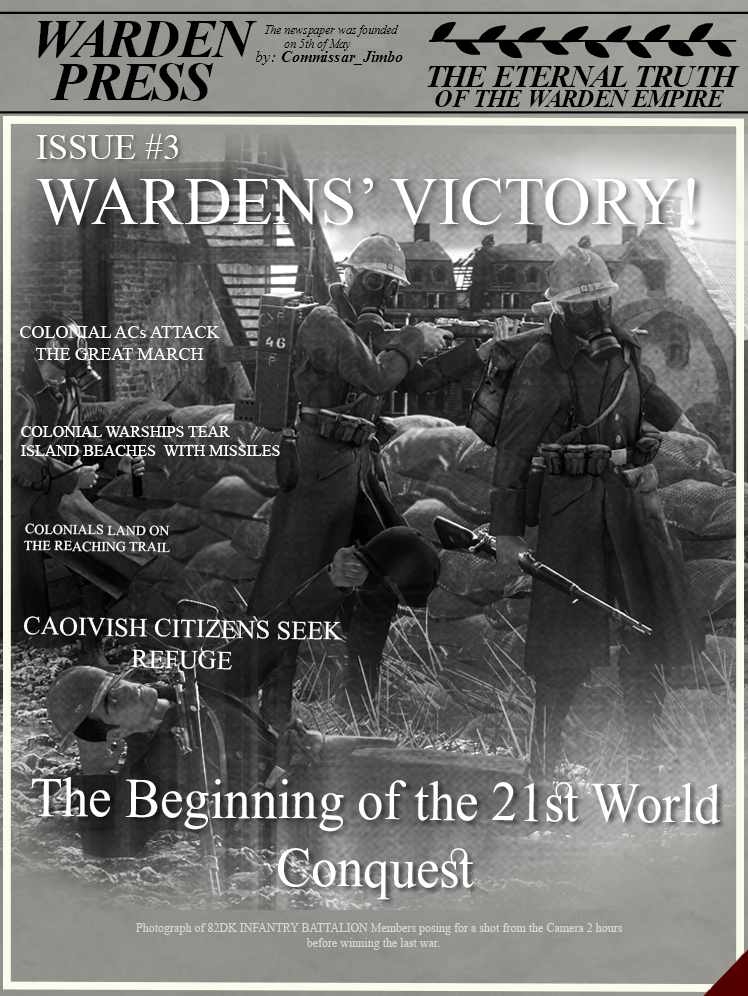 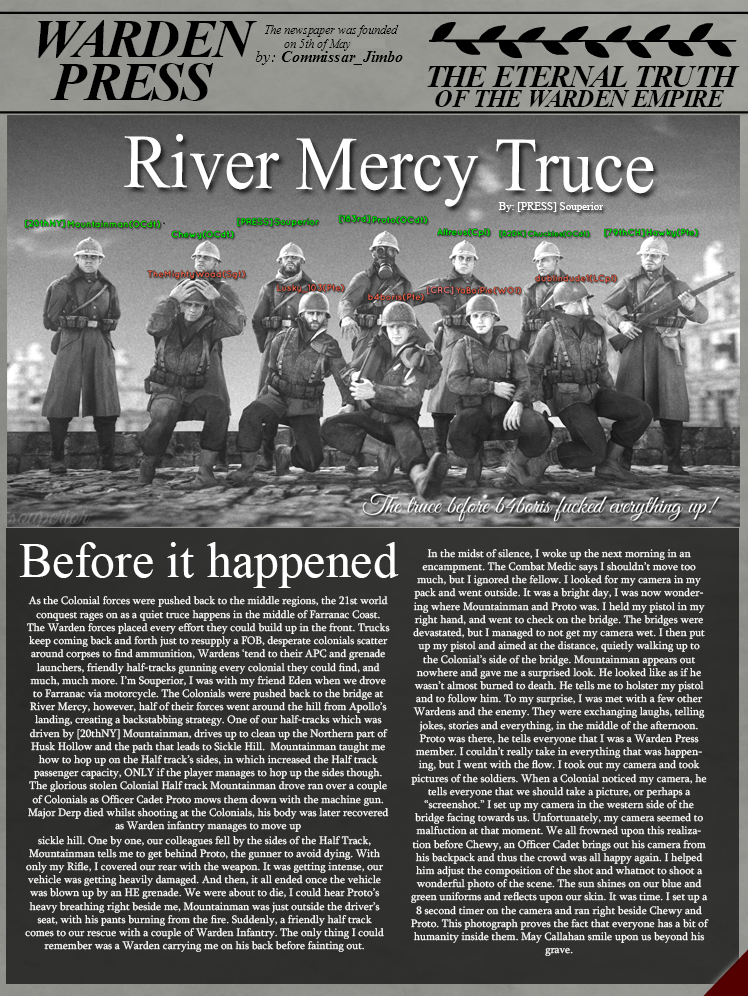 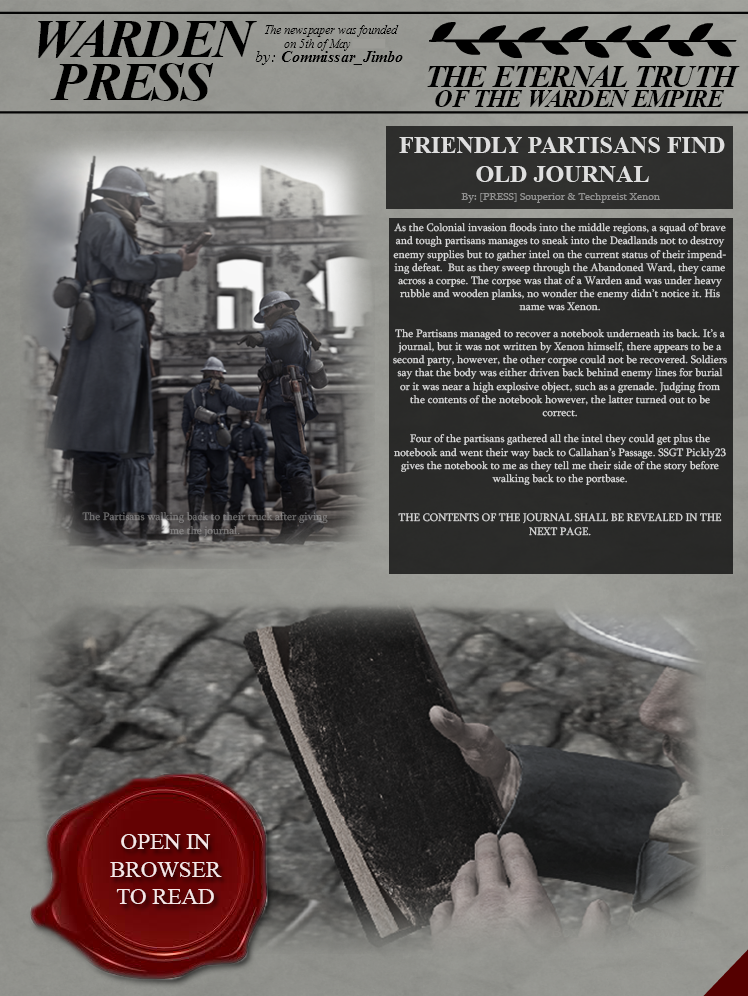 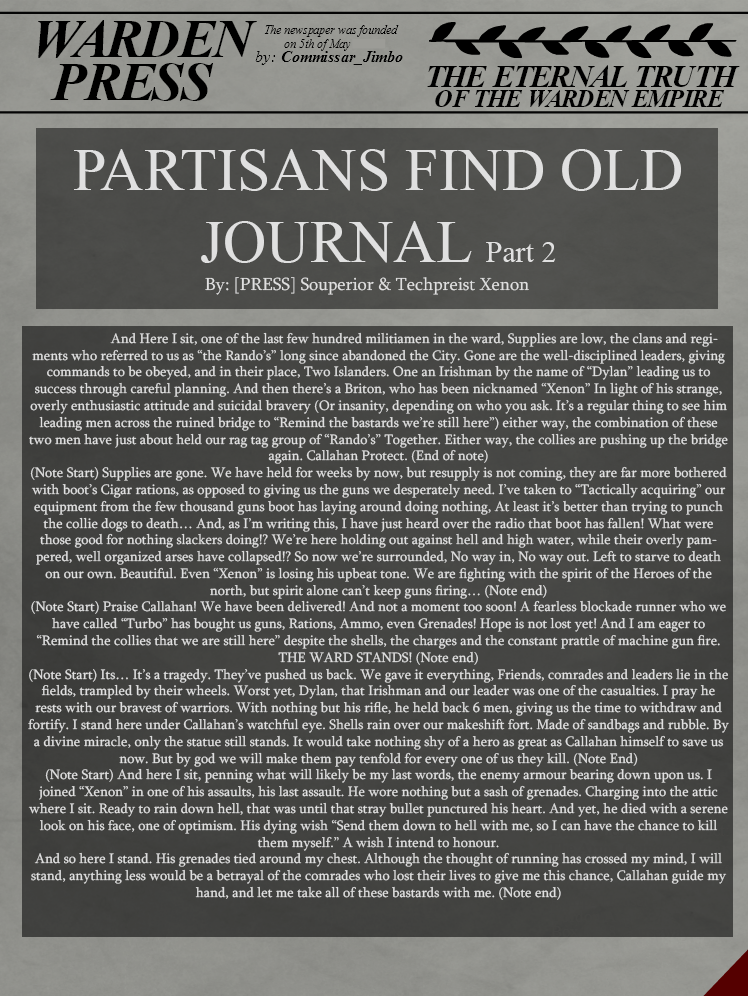 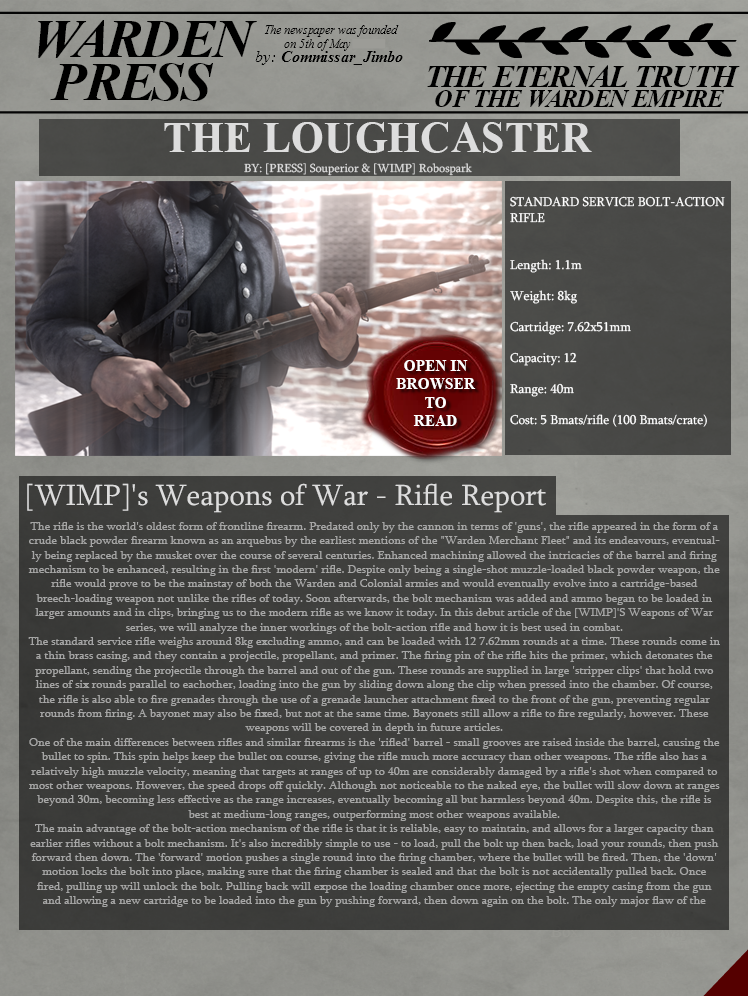 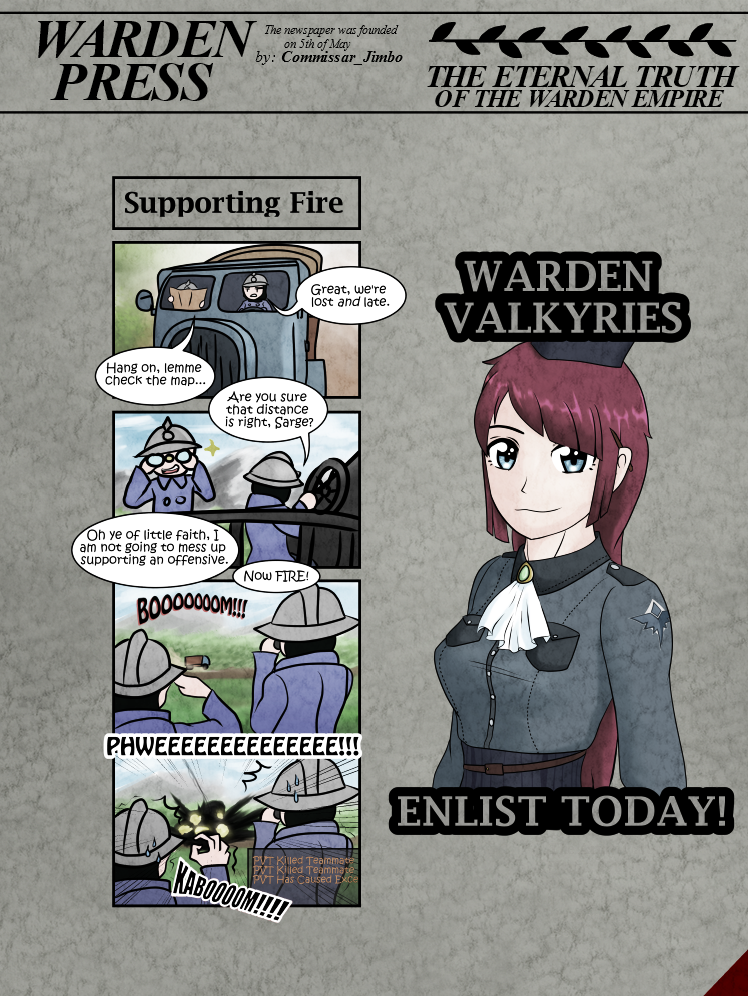 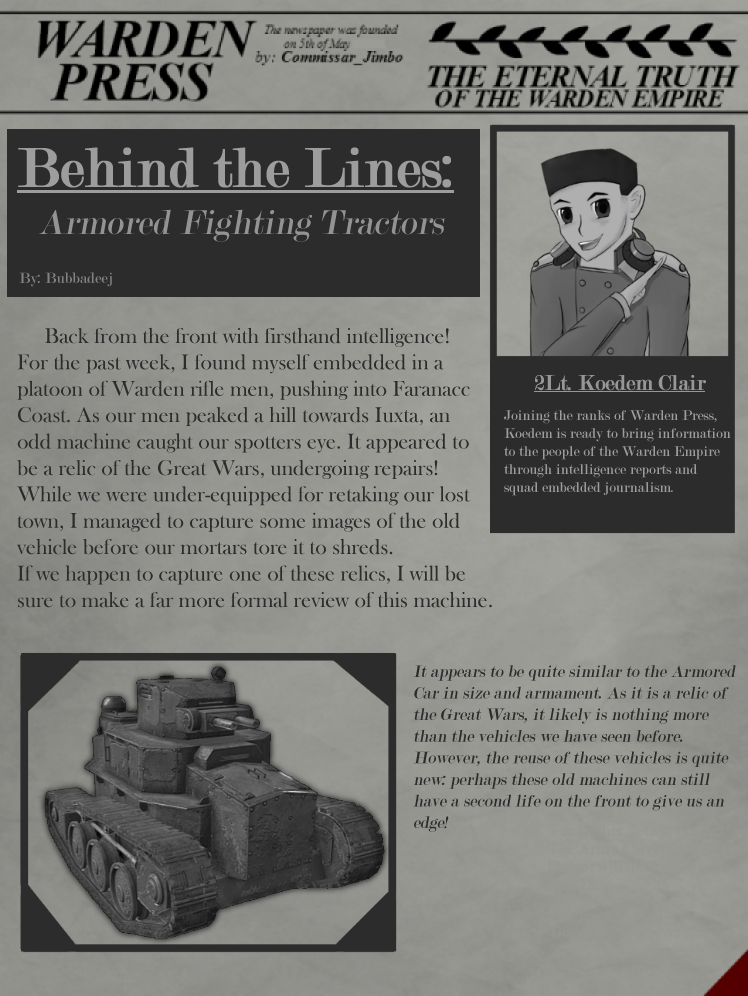 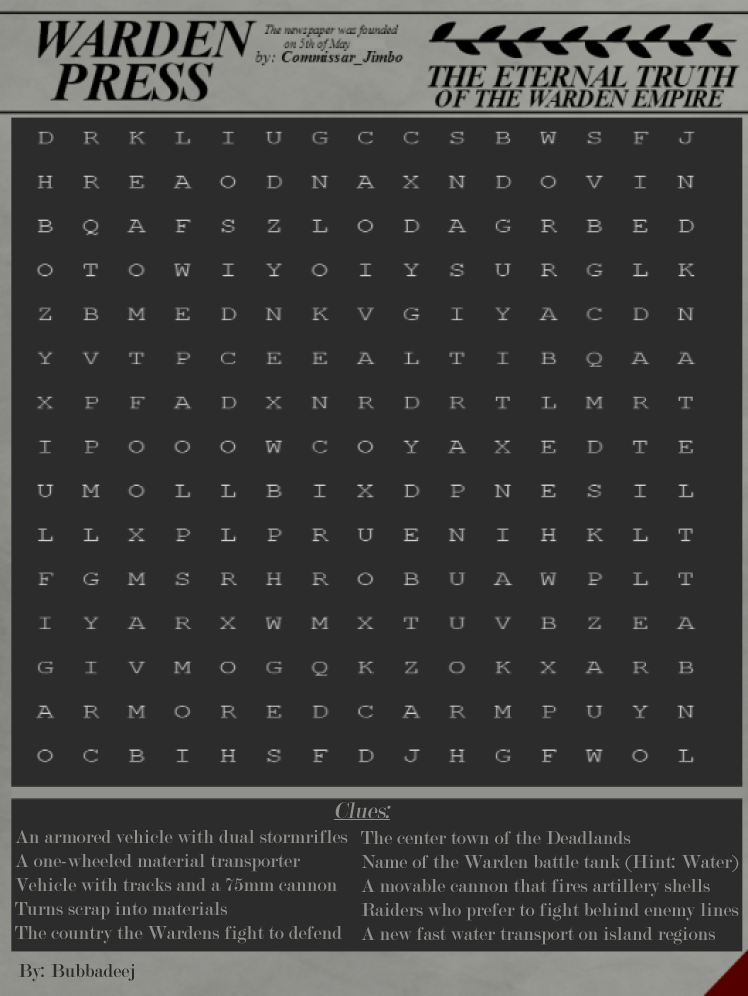 Commisar Jimbo has taken a number of fan art submissions, stories, and more to fill this great newspaper with stuff that's happened during the last war.

The Swords of Maro narrowly destroyed a massive Warden tank column, including 3 Flood Mk 1's and 10 Devitt Mk 3's. Legionary forces were tipped off to this massive advance from forward scouts in the Weathered Expanse region a day prior, receiving 24 hours to prepare for the imminent attack in the remote and unfortified region of Umbral Wildwood.

Under the command of Praefectus Death and the SOM Legate Lercas himself, the outnumbered and outpowered Legionary armored column met the enemy advance on the outskirts of Foundry, in a surprise ambush that caught the Warden menace off guard.

In 3 advances, sustaining insurmountable casualties, Colonial forces managed to destroy the Warden column, marking a narrow victory for the Colonial Legion against their stronger foe.

The Swords of Maro would like to remember their fallen comrades of the 1st advance, from which none survived but who without, the enemy would have prevailed. They will be remembered for their unyielding defiance in the face of certain death.

Pictured below: SOM and compatriot armored columns swarm the third and final Warden Battle Tank, with a harrowing and memorable battle cry.

"Legate Lercas himself". He better have had the entirety of his King's Guard with him at all times. You don't bring a man like that to war without some assurances.

I've been anxiously awaiting this one for so, so long. Come on man! Finish it! Stop teasing us!

I like when they were trying to build a little barge bridge across. Why'd you have to stop it? That would have been epic!

But why were all the garrisons down?! Colonials what are you doing?!

Every time Mulon posts these, I get a little giddy. These are incredibly helpful, even to the game-design side of things.

I really appreciate the way these are edited. Similar to the Terran Marine ones.

During the castle Clapfoot event

Ahh, that patented HMG APC. We saw a lot of this during the FCL tournament. Very strong. Much clever.

Well that worked. That was a thing. I'm not angry about it but i'm not happy either. Bike nerf inc.

And they say shadow dancing is dead...

That's one excellent intro. And Thumb! A lot of random shenanigans on Tempest Island

By: The Man in Gauze

Lol this is some excellent editing. Fantastic content. Watch as The Man in Gauze is driven around frantically in the gunner seat of an armoured car!

Part 3 of 5 - I watched this twice and didn't see you kill me. Fakenews.

Lmfao... This whole video is pure gold. Like. The whole damn thing.

No. No, the average corporal would have been sure to take you with him.

These last holdouts in the safehouse are always a blast. I'm really glad they panned out. I love seeing them get absolutely surrounded like this. As a defender, it really lends exactly the kind of feeling we were hoping for. That desperate struggle against imposible odds.

I'm really proud of you for doing the right thing here. Put him out of his misery... god we need a 'suicide' button...

THE BODIES. SO MANY BODIES. God I love safehouse fights.

Foxhole Moments. I actually really like your playstyle. You play a lot like I do. You clearly spend more time thinking about where you are.

Thanks everyone for your art and submissions. Sorry for not getting a highlights portion on the devstream this past week. It has been a packed few days. The war ended a little earlier than expected and we had to cram to get the patch out the door for you guys. We'll be back to our usual selfs next time. Until then!