FAN ART CONTEST HAS BEEN ANNOUNCED!!!111eleven11. Any. Medium. ANY. So if you want to paint a picture in the blood of your enemies you can, but make sure it fits the theme. You can read more about the requirements for it by clicking this link.

I want to feel like we made a huge mistake by letting you guys pick your own medium. I want to see writing in the sky with air-writers. I want to see wedding rings with "Stay Foxy" inscribed on the inside. Don't let me down. I'm counting on you.

Content considered for this Community Highlights was submitted up until Tuesday, Feb 4, 2019.

It has machine guns that face backwards! Could you imagine being the player that has to man that gun? "What's going on guys?!" 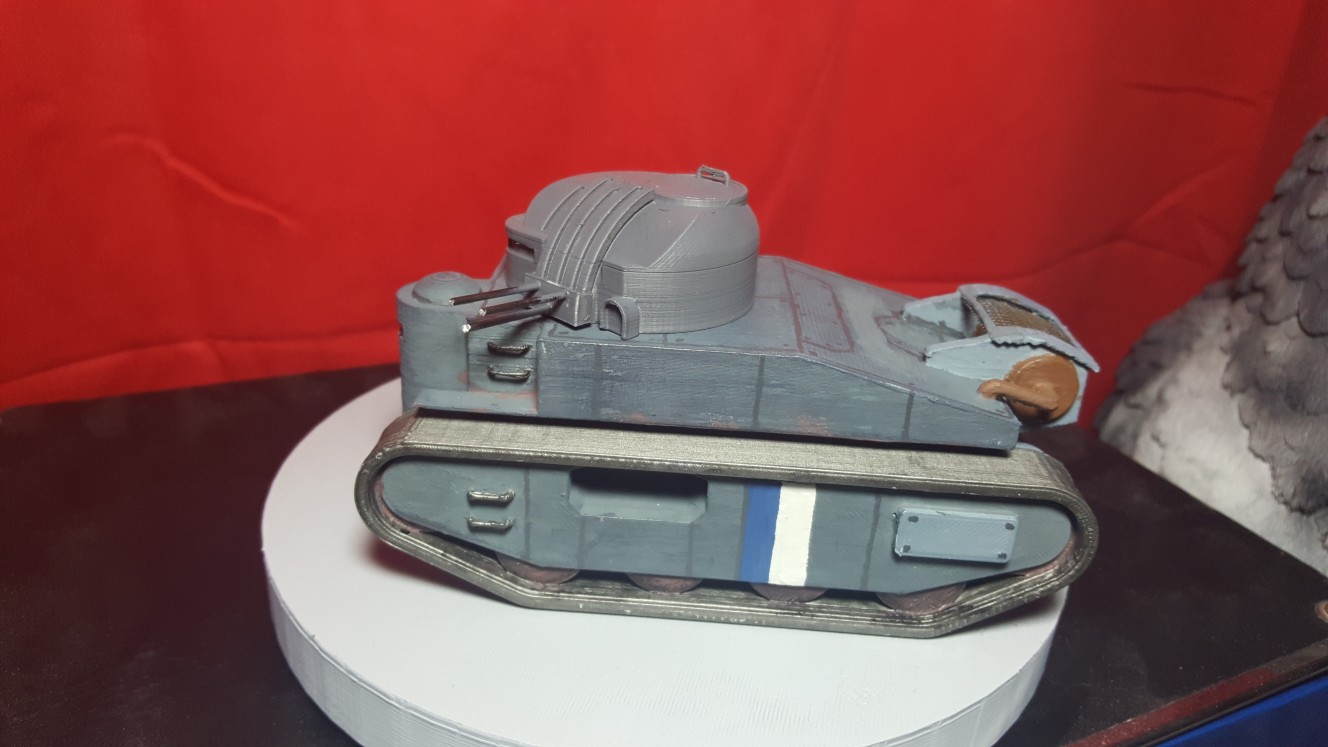 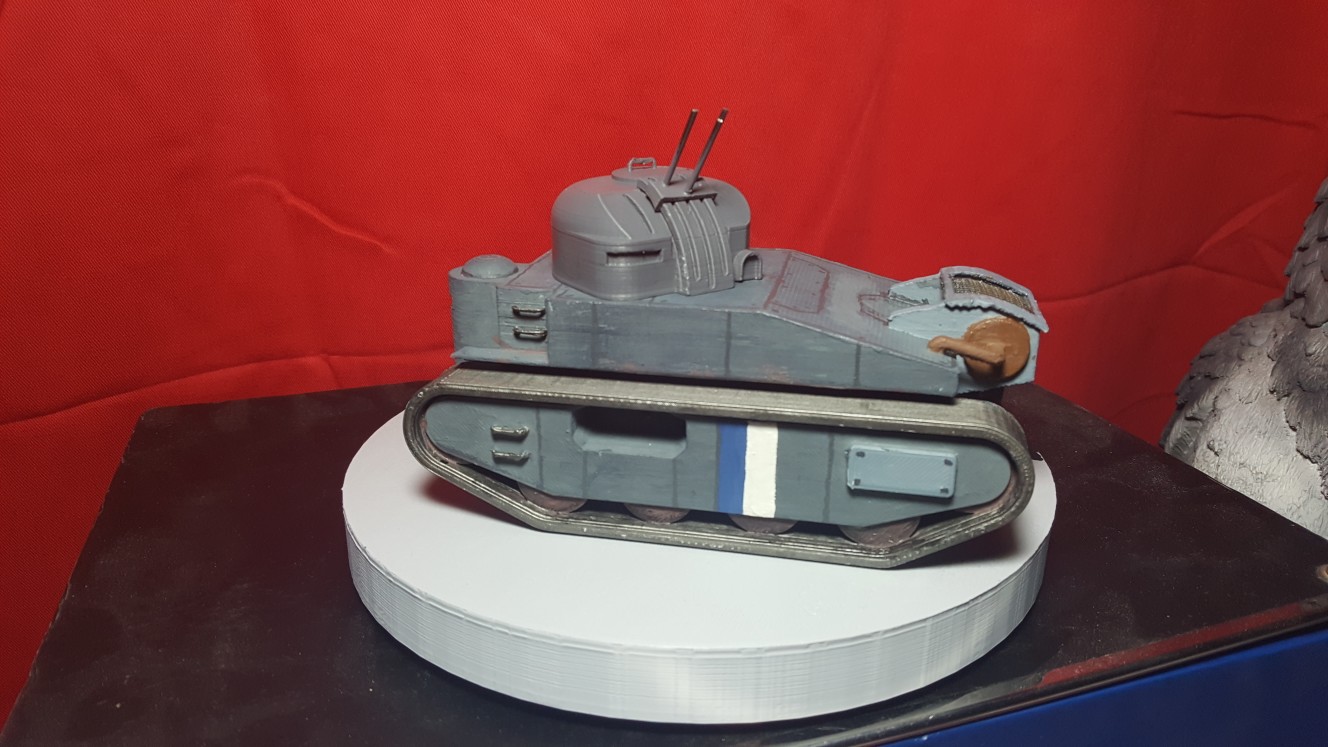 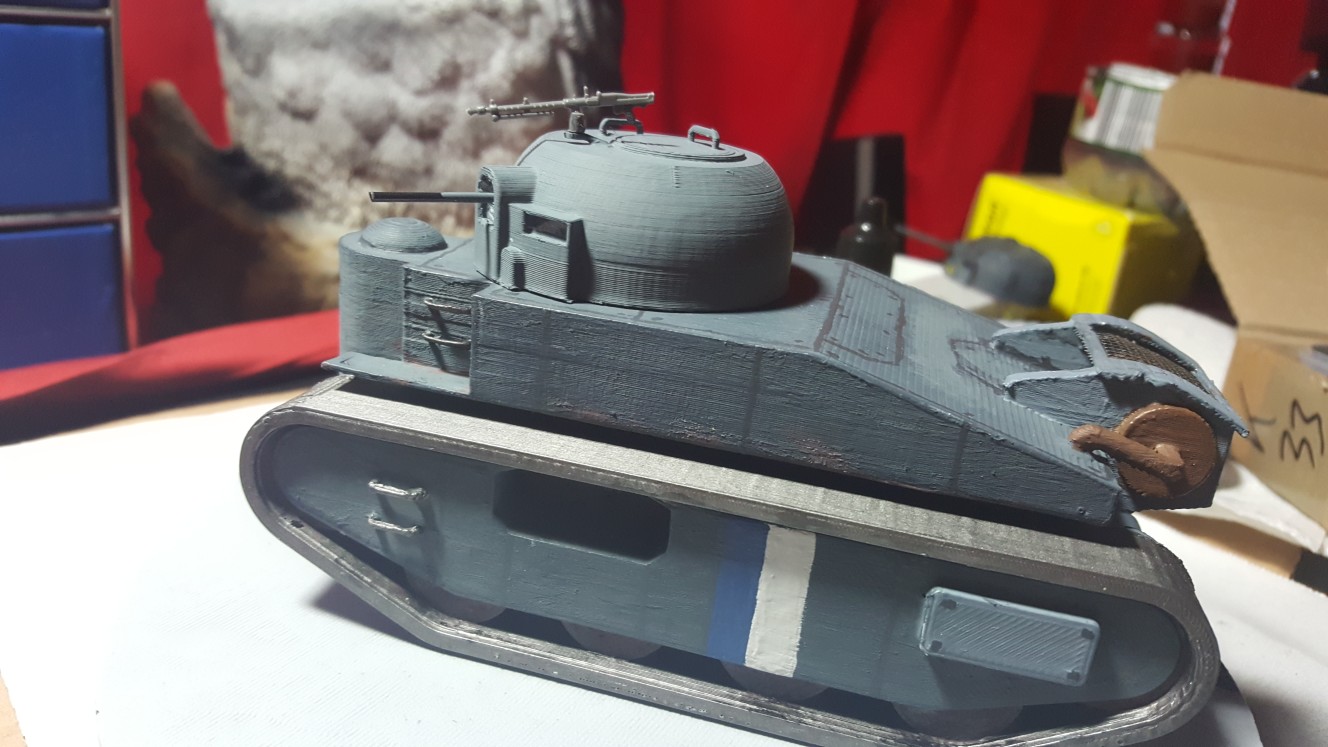 Another thank in Klaus' growing arsenal of warden tanks that'll never be because we dont have planes you silly goose! What're you thinking?! And last I checked it was a war crime to use AA weaponry on infantry. You crazy guy.

I don't know if this came before or after Klaus' tank but it looks absolutely phenomenal. Great job. A lot of collaborations this community highlight.

Ahh yes. How to spot the main character in any anime...

These keep getting better. Thanks Freerk.

We used to have a 'funny' section, but as time has gone on, the funny stuff kept getting more and more artistic and now its hard to separate them... This is funny, but, I mean, it's also incredibly high quality.

Every time I see this stuff from Starwarss im reminded of a few months ago how he showed me the 3D rendering of a helmet. Just the helmet. Like. That was all he was ever going to do. And here we are.

Hey Souperior, can you paint me like one of your warden girls? But I want to be wearing a monocle, sitting in the crow's nest of the Mayflower with an expression of anxious determination, and in my hand is a bottle filled only with the laughter of a newborn babe.

Should be easy for you. Thanks.

Sorry for miscrediting you on the devstream! It's some great work though!

There. There's the main character. In case you hadn't spotted her yet.

This looks like a scene from Windtalkers. Betcha that's Nicolas Cage under that mask.

Dude the Might Ducks came out in 1992 and I still can't help but think of it when I see this. That was more than 20 years ago. Damnit Disney.

Better late than never! MyHaven was working on some art for us during the tournament but got pulled away by real life responsibilities. The sucker. He did eventually complete this though.

The one and only Geoffrey Jennings, of the Presscorps. Done by the PRESSCORP ARTIST. Man if this gets much bigger we're going to need to start an official publication.

This is what our halftrack used to look like. Why you would do the old halftrack I'll never know, but nice job all the same.

When I first saw this I was like, 'Whoa cool!' then I looked at it a little closer and im like.... 'what the hell is going on here?' There appears to be a dude dabbing in the corner, and another guy taking a selfie with a helmet. I'm so confused. 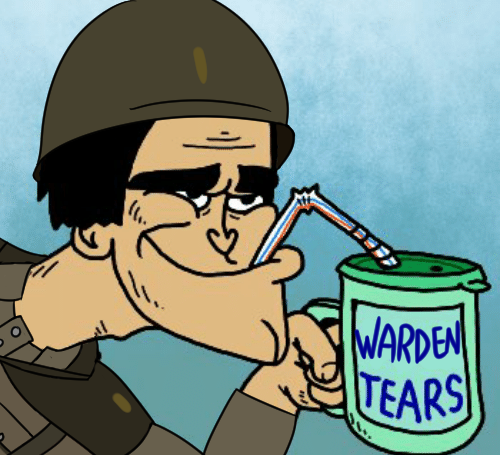 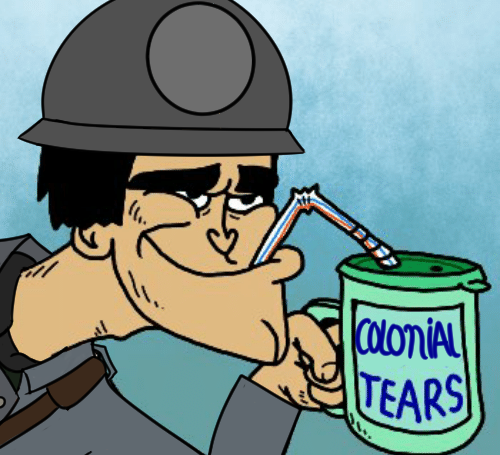 Haha just kidding. There's still a funny section. Where the hell else could I put this classic meme.

It was like 2 meters, and it wasn't fair. The poor guys were great sports about it though. And now they got a great poster to remember it by!

It's an old meme sir, but it checks out. Actually I think we posted this one before in the past... but it was probably like 40 highlights ago. So whatever. I'm not gonna check.

Zergs is best doe. Come at me.

I get emails and pings about removing it every. single. day.

That's one high-definition family crest. Imagine seeing that on a Knight's wall. I wouldn't mess with that family. No way. They can have the Iron Throne, dragon's be damned.

This goes for all you nerds out there too... You know who you are.

Morocco... man.... I've seen you around for 2 years now and i'm beginning to think I'll never know you. 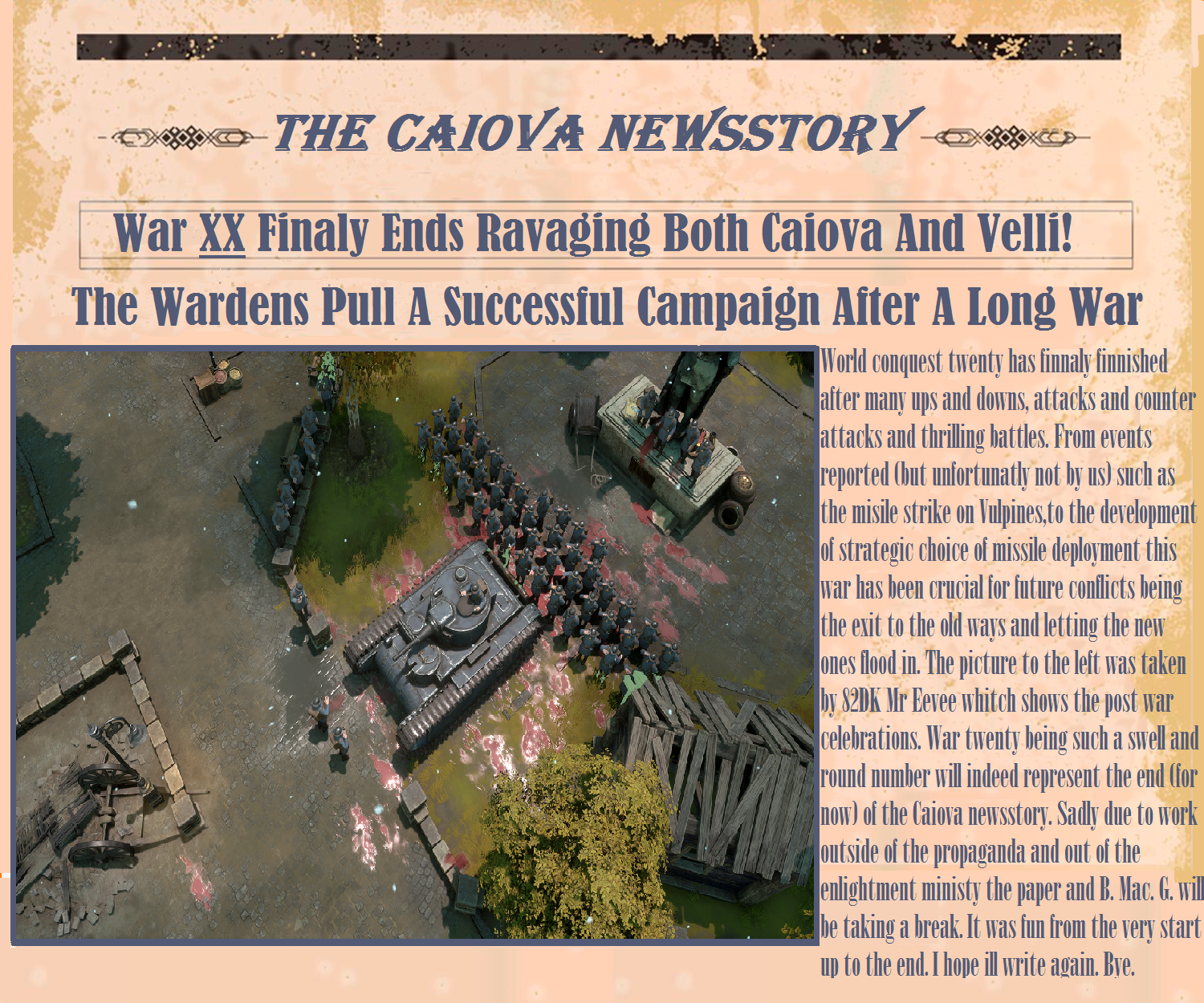 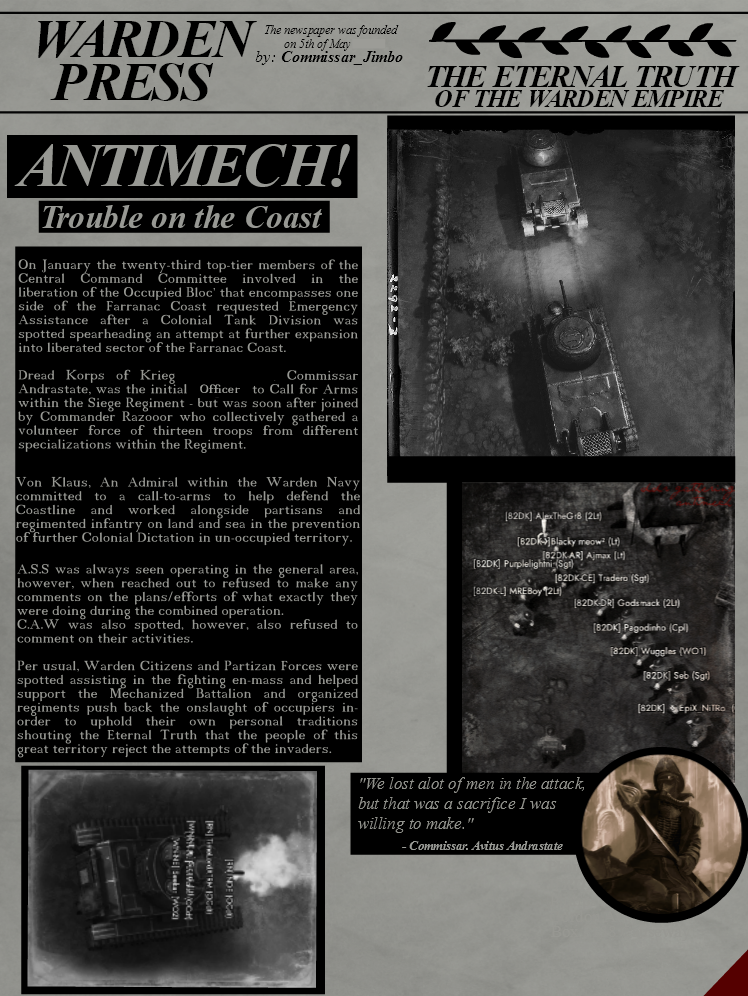 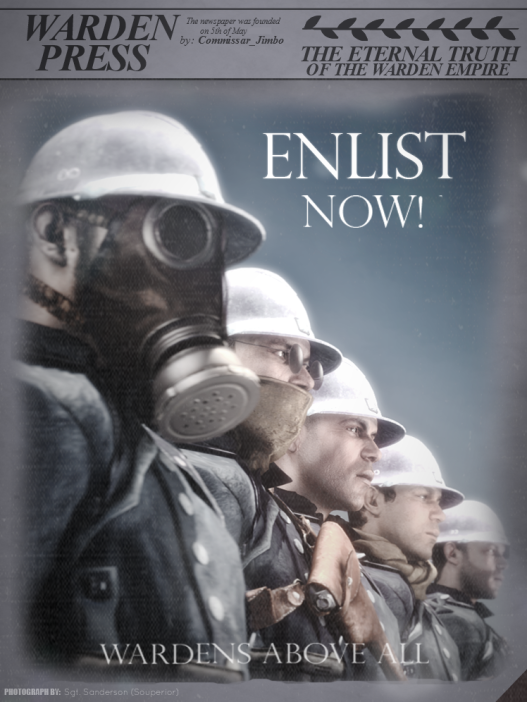 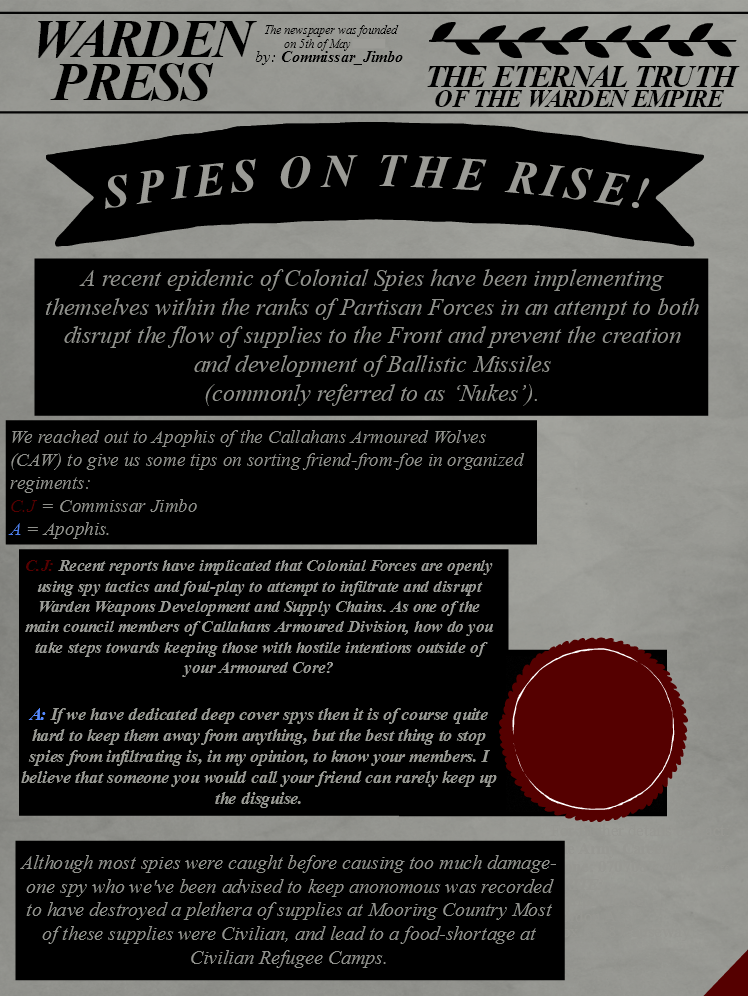 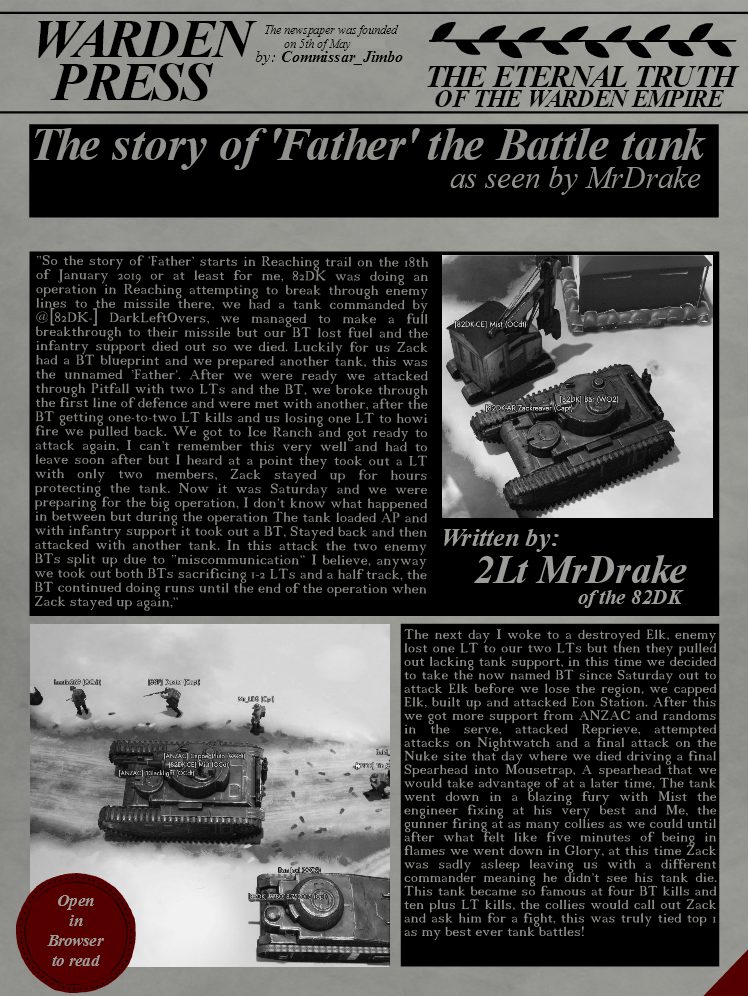 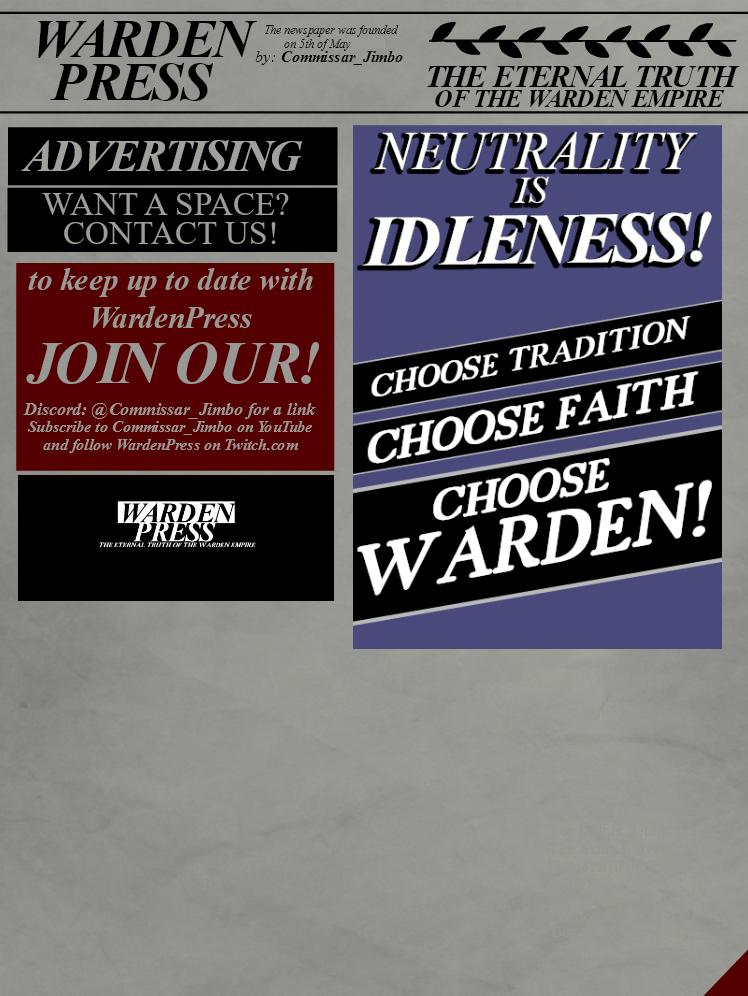 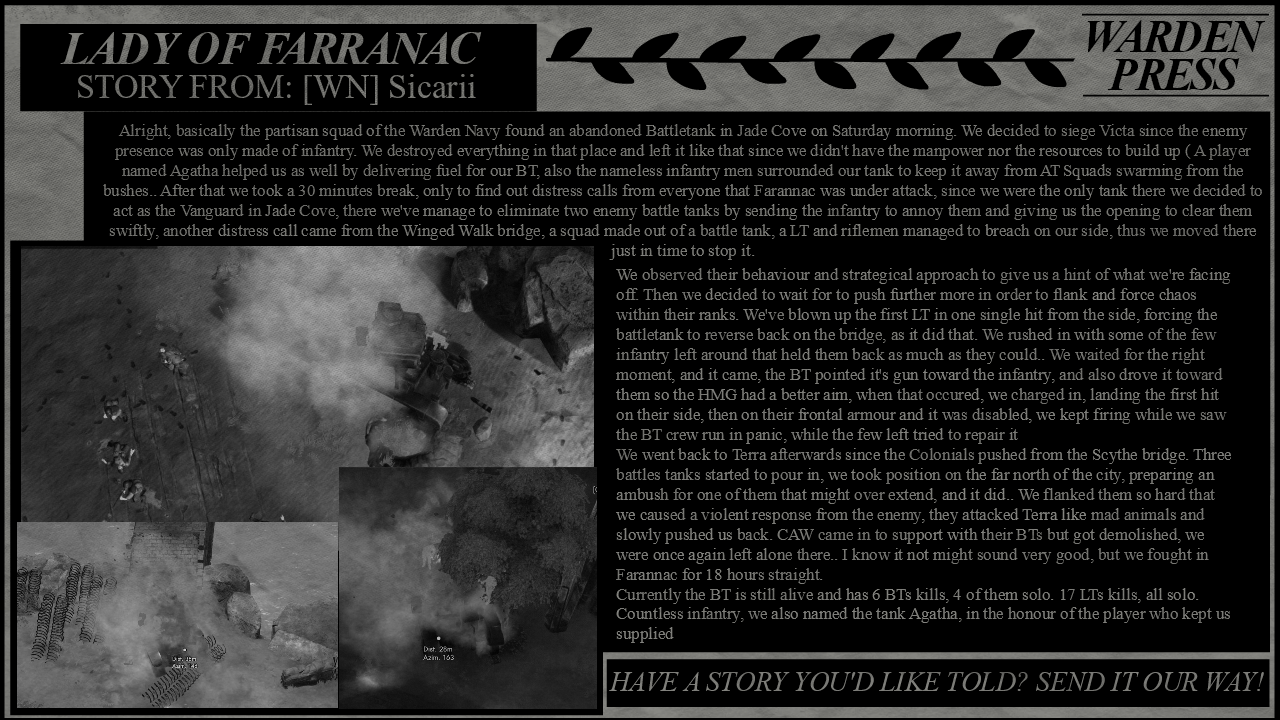 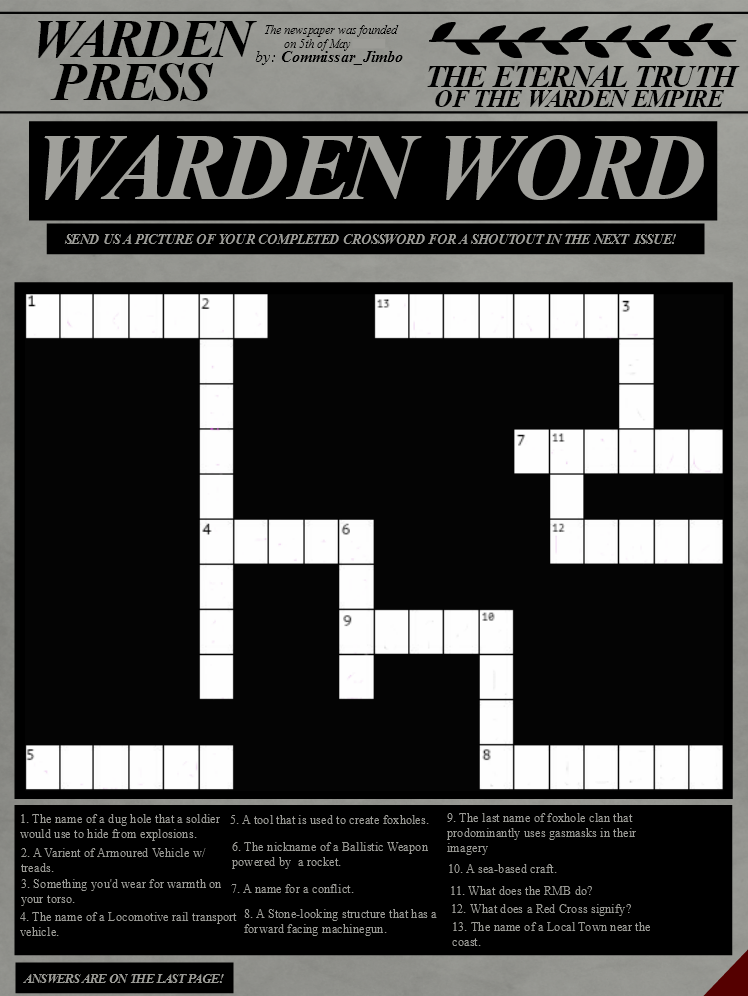 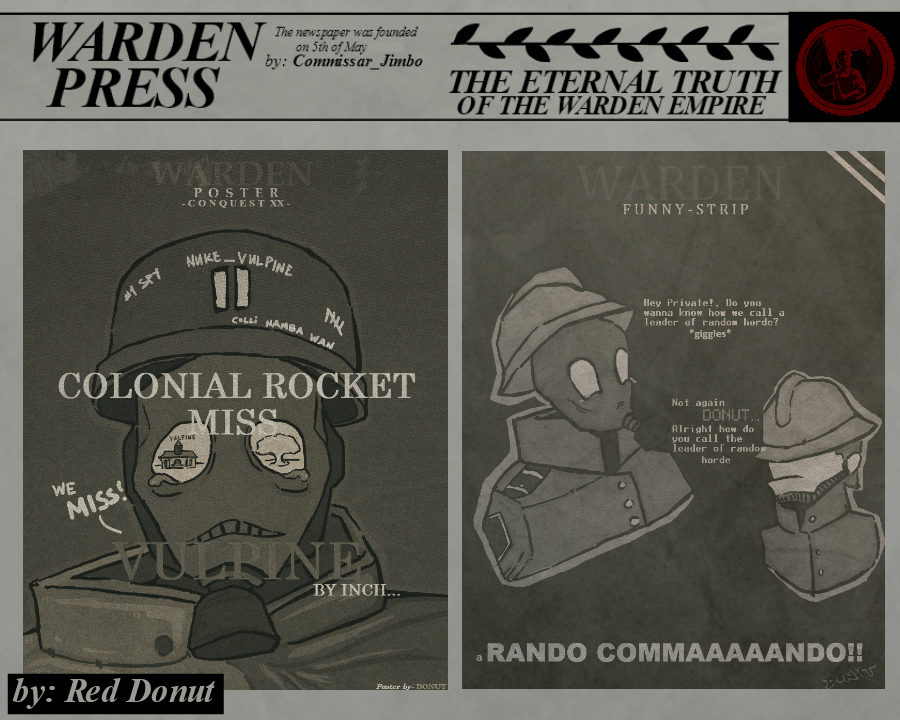 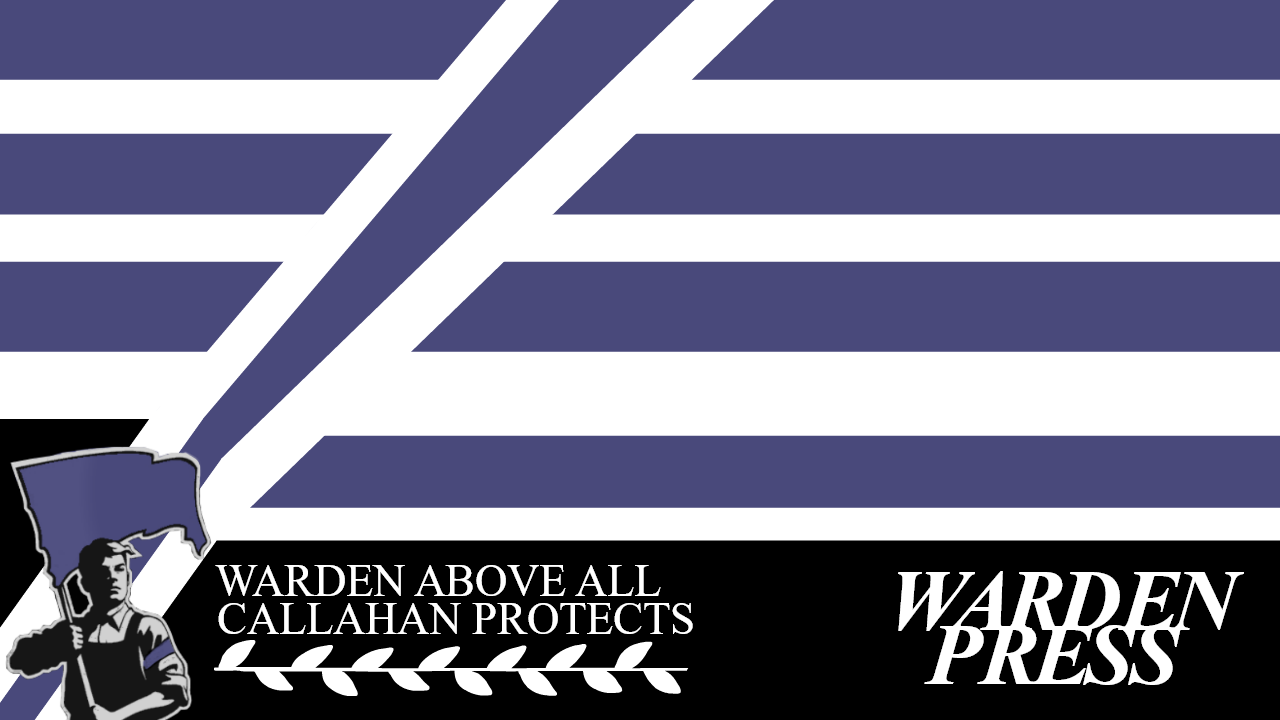 I am really sorry if I got the page order mixed up. There are a lot of pages. 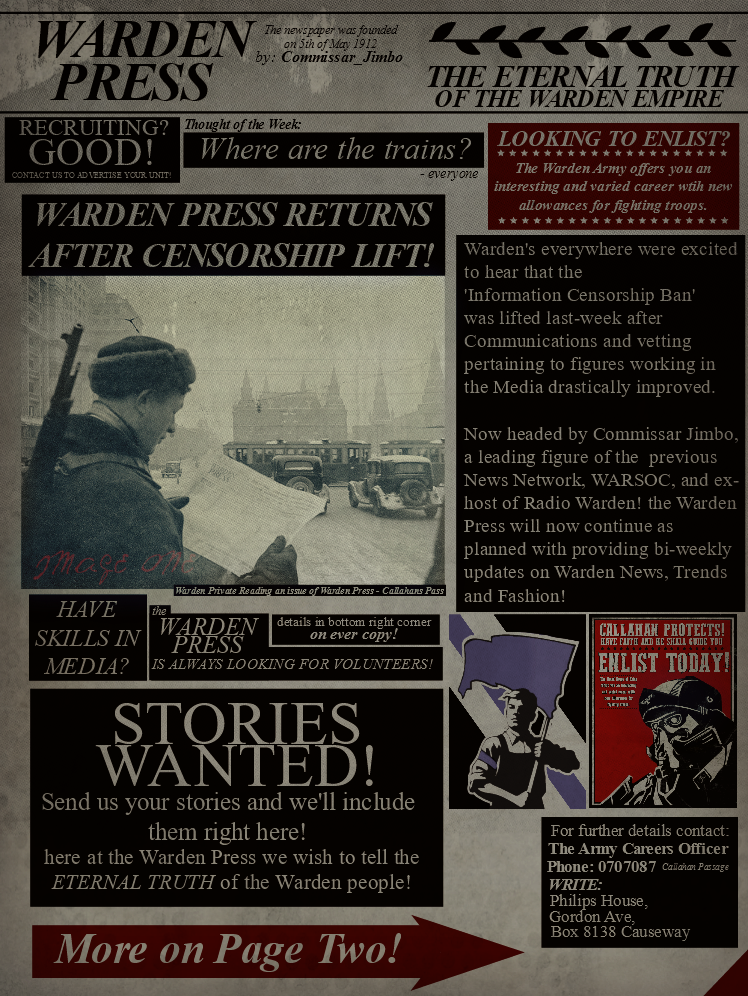 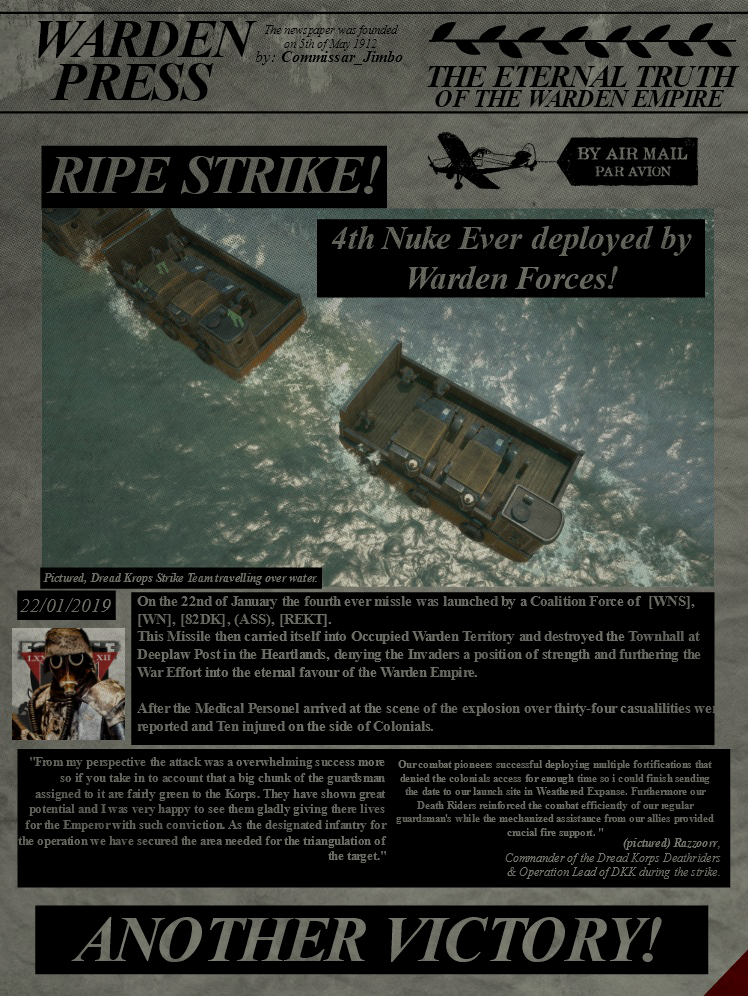 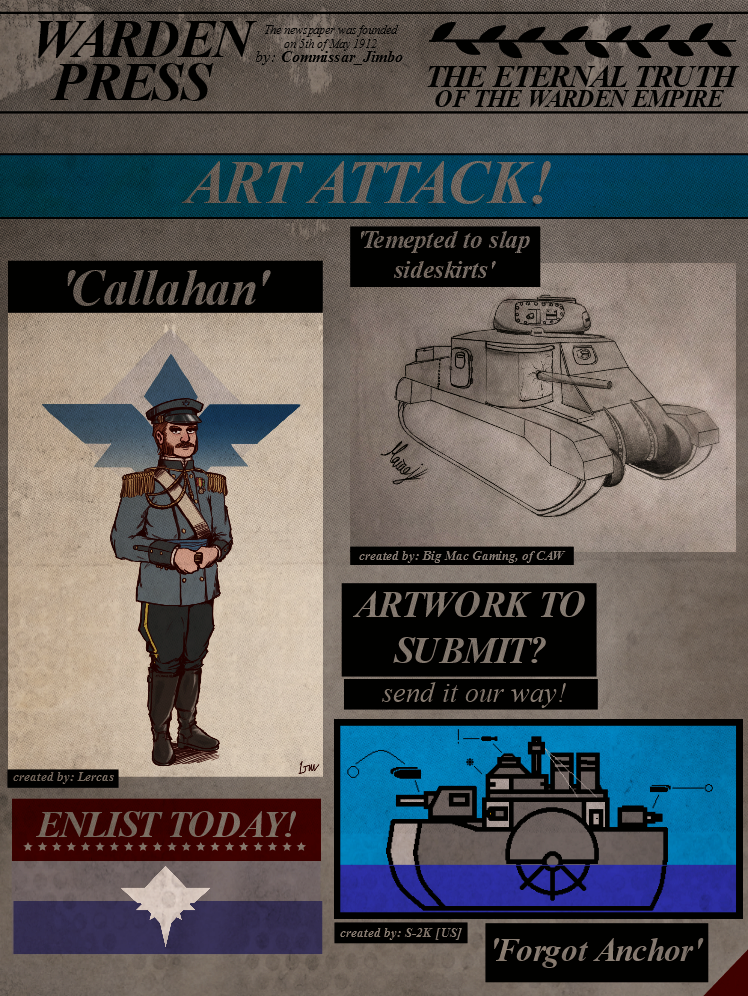 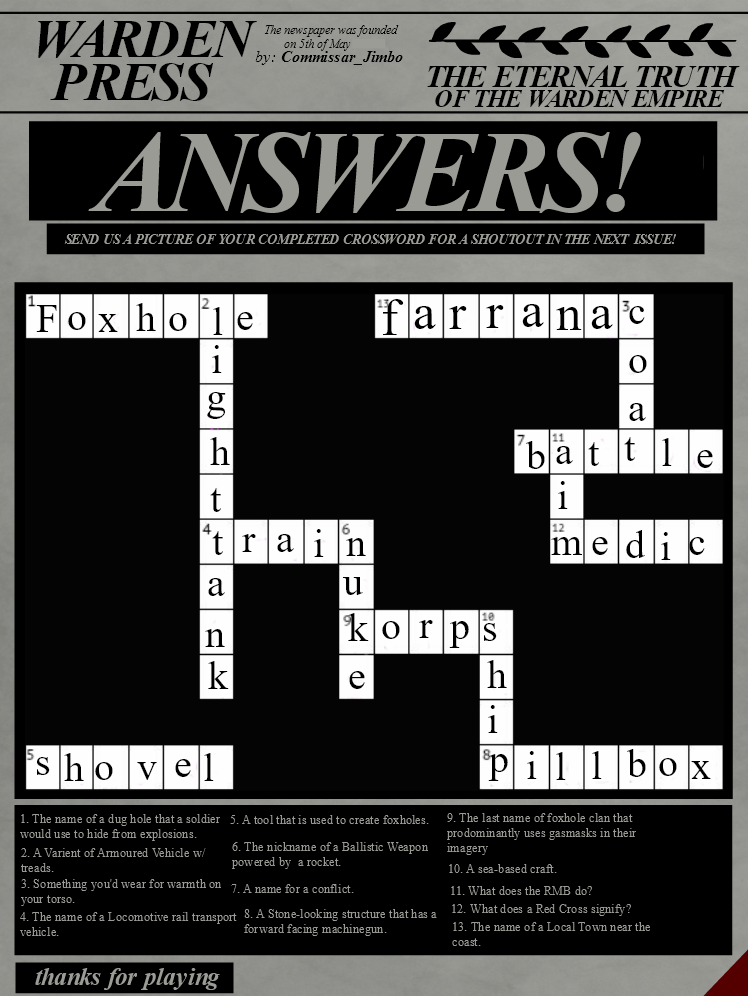 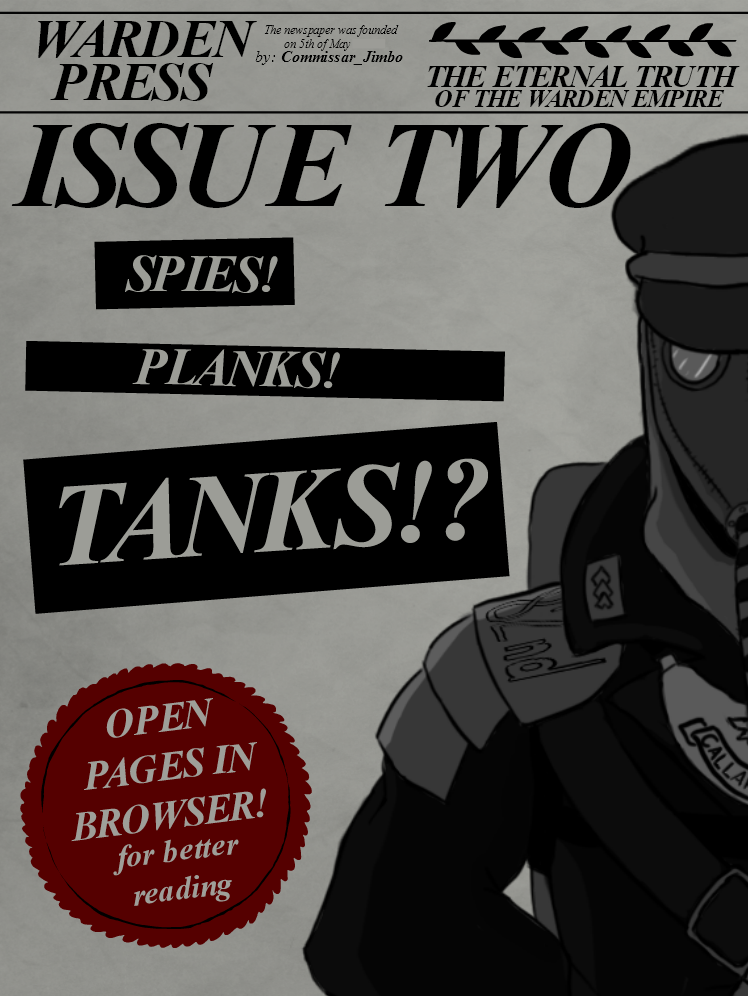 Like so many pages so i'm certain I've got the order mixed up. Stay tuned while I mad-scramble fix these issues!

1000 warden infantry? You sure? I'm gonna have to ask you for your sources, sir!

In a stunning turn of events the Warden victory parade turned to utter chaos today. The festivities began in right proper order at the historic statue of Callahan earlier this morning. An impressive showing of military might was punctuated by the unexpected display of the latest generation of anti tank rifle by soldier Blackymeowmeow and the inclusion of a battle worn medium tank, rumored to be the famed "Father" battle tank of Reaching Trail infamy -contradicting earlier reports of it's heroic destruction upon the battlefield. The procession started off with a stunning rendition of "3 2 1 salute!" in an unconventional a capella performance in E flat, by Commandant Avitus, with enthusiastic gestures from the attendees and several spontaneous calls for encore. Opportunities abounded for delighted citizens of Deadlands to partake in photo shoots with members of the hardened 82DK battalion and WN soldiers returning from a colonial battle tank sacrifice at the altar of Jade Cove, which had taken place moments earlier. However this took a drastic turn for the worse when two members of the logistics battalion were allegedly seen holding hands during the thirteenth photo shoot. Despite desperate pleas that they were merely feeling each others calloused right index fingers, the mob quickly turned on them.

This alone would have marred the days events but then quite suddenly Mechanized Commander Holland lit a cigarette and promptly dropped his pants, <REDACTED>. Unable to hold rank he fell out of line to the immediate chastisement by the present officers in full dress regalia. A shot rang out and several kittens and leghorn laying hen, suspected to have been illegally procured by Officer Ryu Sabusa, clawed and pecked at the soldiers with what was described as "strangely proficient fighting techniques". A lone soldier jumped into a loaded tank and drove through the ranks in an apparent attempt to "roadkill" as many as possible. His identity remains uncertain at this time. At this moment a delivery driver hailing from Overlook Hill arrived with several orders of chicken nuggets, adding to the general confusion. Casualties continue to mount in this unfolding story. Until next time, Kreigsman Blackymeowmeow signing off fur now.

Lmao. That language though... it was... colourful.

The usual update from I Saw A Bear!

"Rough Rides" he calls it. In a battletank. I mean all those explosions and bullets and dying people aside I'll bet that ride was smooth as silk. Warden Engineering.

82DK does a recap of the latest patch, reviewing the strategies and other applications of the motorboat. If ever you wanted to crawl inside the minds of 82DK's top minds, this'd be it.

So amazing. Animations like this really blow our mind.

The best clip from this whole thing is the one at like the 9 minute mark where they're spamming F as as fast as they can to break the chat at the end of War 20. Holy. Hell.

That trihorn halftrack.... wow did that not work. That didn't work all the way to the bank.

Lol, not only is he using a soundboard on his in-game mic, but he added sound effects to the video too.

Lmao, there's so many good clips in here. And the editing is great.

That is some epic music score...... and some really red, really bold text. I feel like if im going to join any clan, it would definitely be the one who repeatedly smashes me in the eyeballs with giant red text.

Radio Warden is back! This isn't, like, presscorp. This is just Commisar listening to jams with some radio commentary between songs and set to some foxhole art.

By: A Holy Crusade

Im really confused by the editing. So confused.

A lot of infantry gameplay here.

This is why you always need a tank commander. Always. And then you listen to him.

This is what Foxhole would be like if instead of soldiers we had human-sized squirrels and just loaded them up with coffee and released them into the world with guns.

UBGE in action in War 19! Love these guys. Super friendly group of players.

Man I miss Moitao. Haven't seen him in ages.

Moorep takes a pounding from 15 guys at once!

I'm actually super happy they named their tank. Like, that's all we really wanted from this patch. Now all we need is some way for players to etch the name onto the side of it...

I was screaming at the monitor for this one. Like PLANT THE DAMN SATCHEL. STOP LOOKING AROUND. JUST PLANT IT. AAGGH.... im glad he got it in the end. I would have had to have a word with these two.

Okay so that's it from me. Yeesh that was a lot. This highlight contained sixty-one images, and 23 videos. You all need to take a solid break. You're killing me. And I'm sure I still missed a tonne, and if I did please re-post it to the creative channels on discord. I'll grab em for the next one!