For those of you seeing this for the first time, the following is community art gathered from a variety of mediums but the best place to put your piece if you're looking to get featured is on the discord in the #creative-streamplug channel. Just pop it in there and we'll see it! I promise. Alternatively, if you have a cool story from the war, post it into the #war-stories channel. These places are goldmines for great stuff from our community. But make sure you read the pins so that it can be formatted correctly.

I think Freerk went a little stir crazy this week. He produced a lot of stuff, most of it based on these two chaps. So get familiar because you're about to get a lot of these little fellas flying at ya! 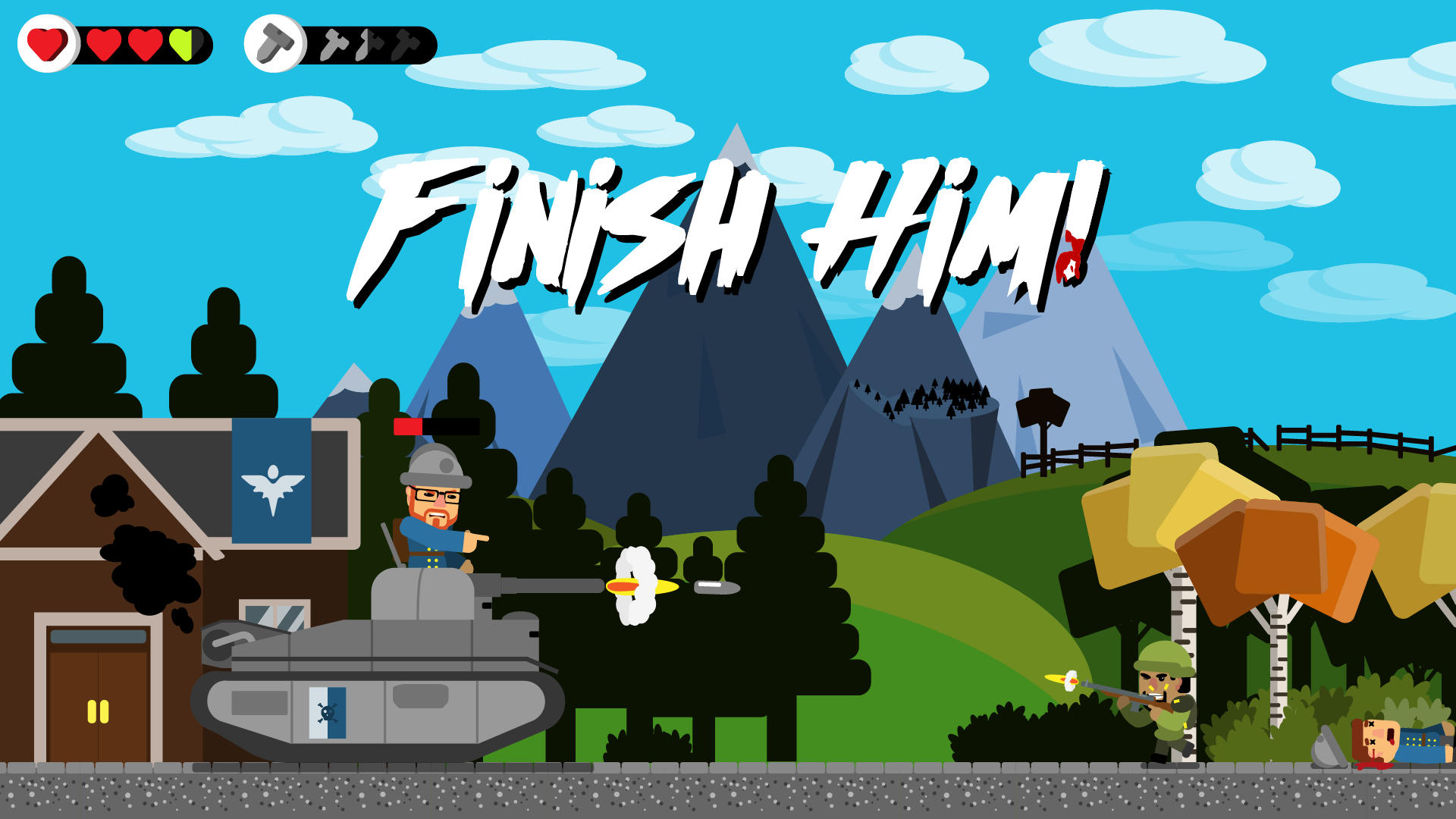 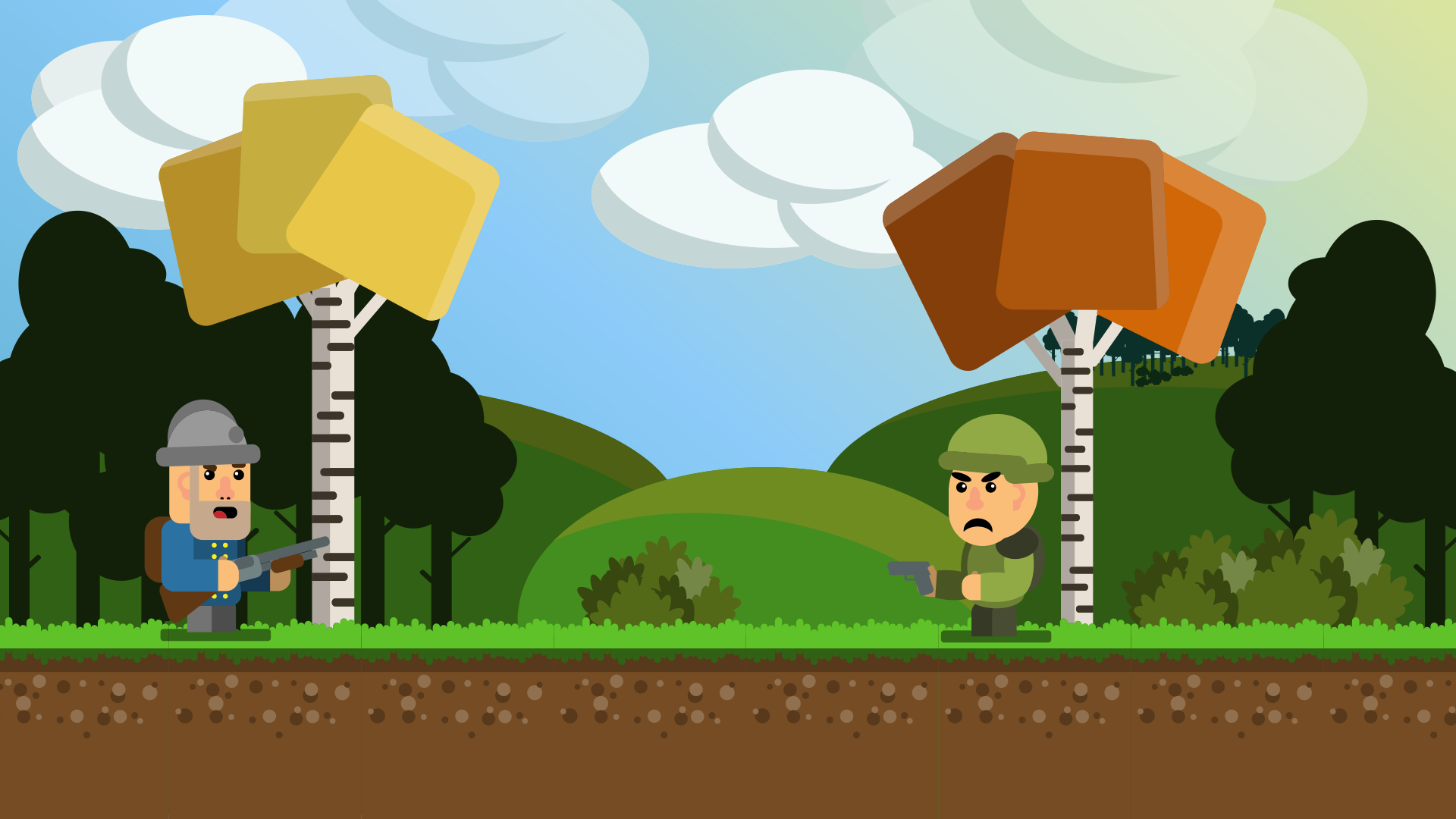 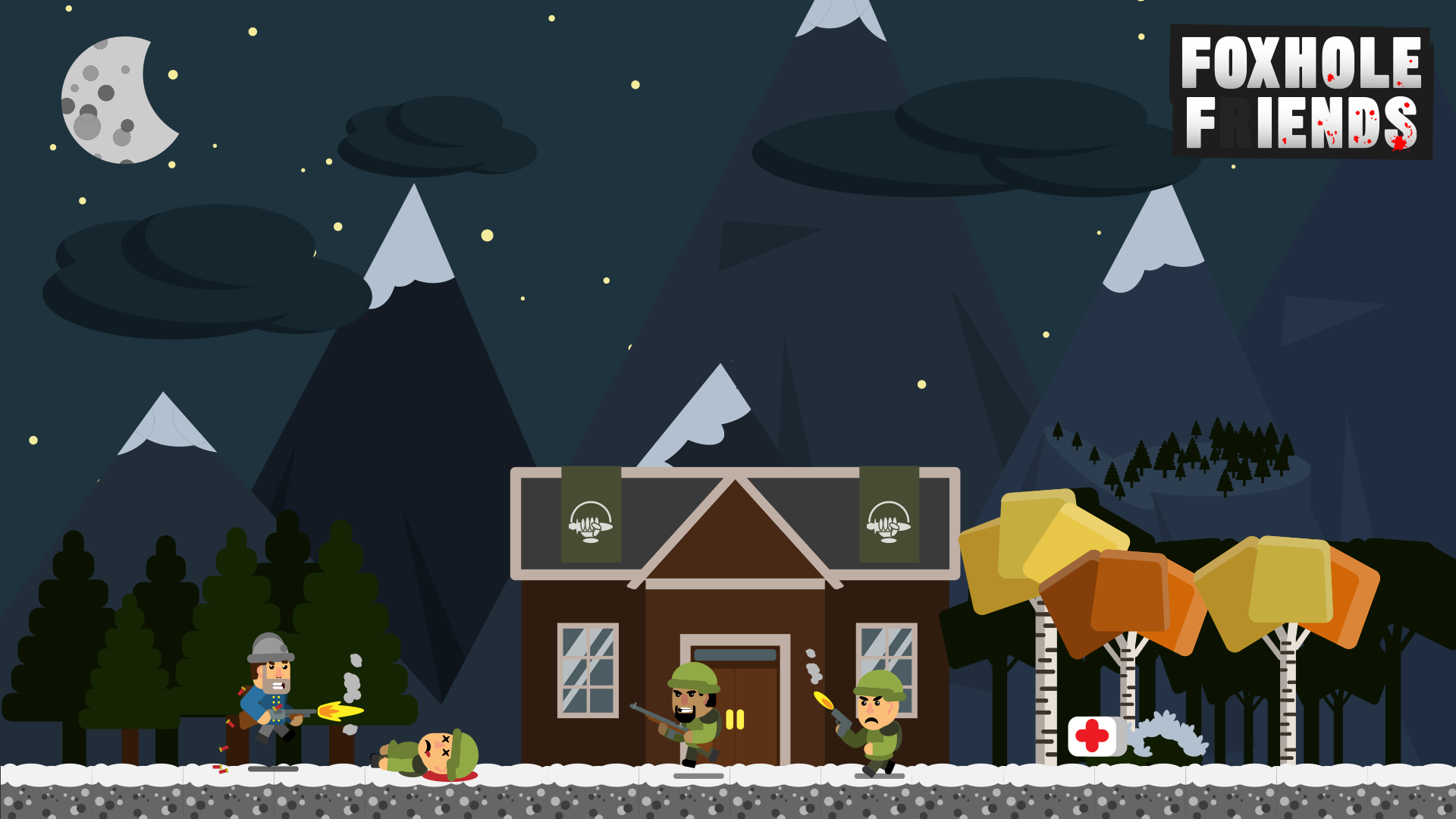 Okay so I'm going to space these out a bit, but here's the first of Sgt. Shotty and Cpt. Carbine animations from Freerk. This looks like an awesome game in of itself. I have to ask though, is that Matt in the Tank?

Officer uniforms. Are you crazy? That'll make you a target for enemy snipers!

I'll bet we've been getting more than a few pte roadkills after this last week's sale...

Bunch of warden scoundrels doing some suspcious things. Like walking. And Partying. I don't trust 'em. 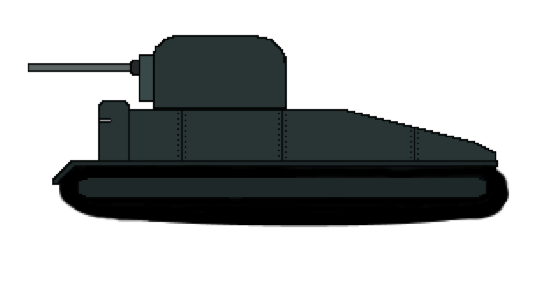 Spiffy! Neat! Cool beans! Now what about the NCOs?

Here's a reskinned Warden model. He has a bit of a Ryan Reynolds look to him. So Deadpool. This guy here is Warden Deadpool.

This is cool. Not only because of the model painting, but because there's an accompanying concept art for it (below). 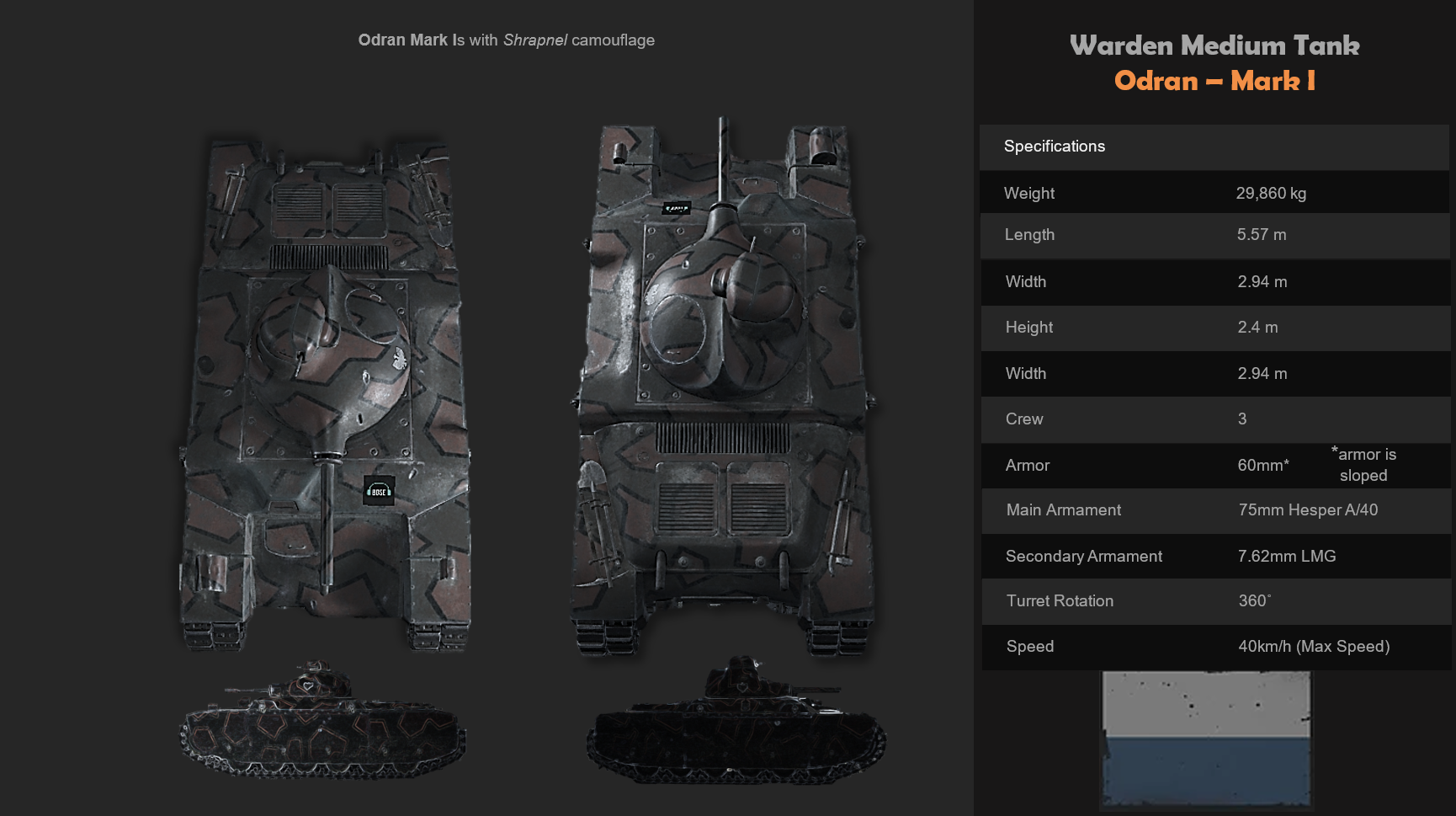 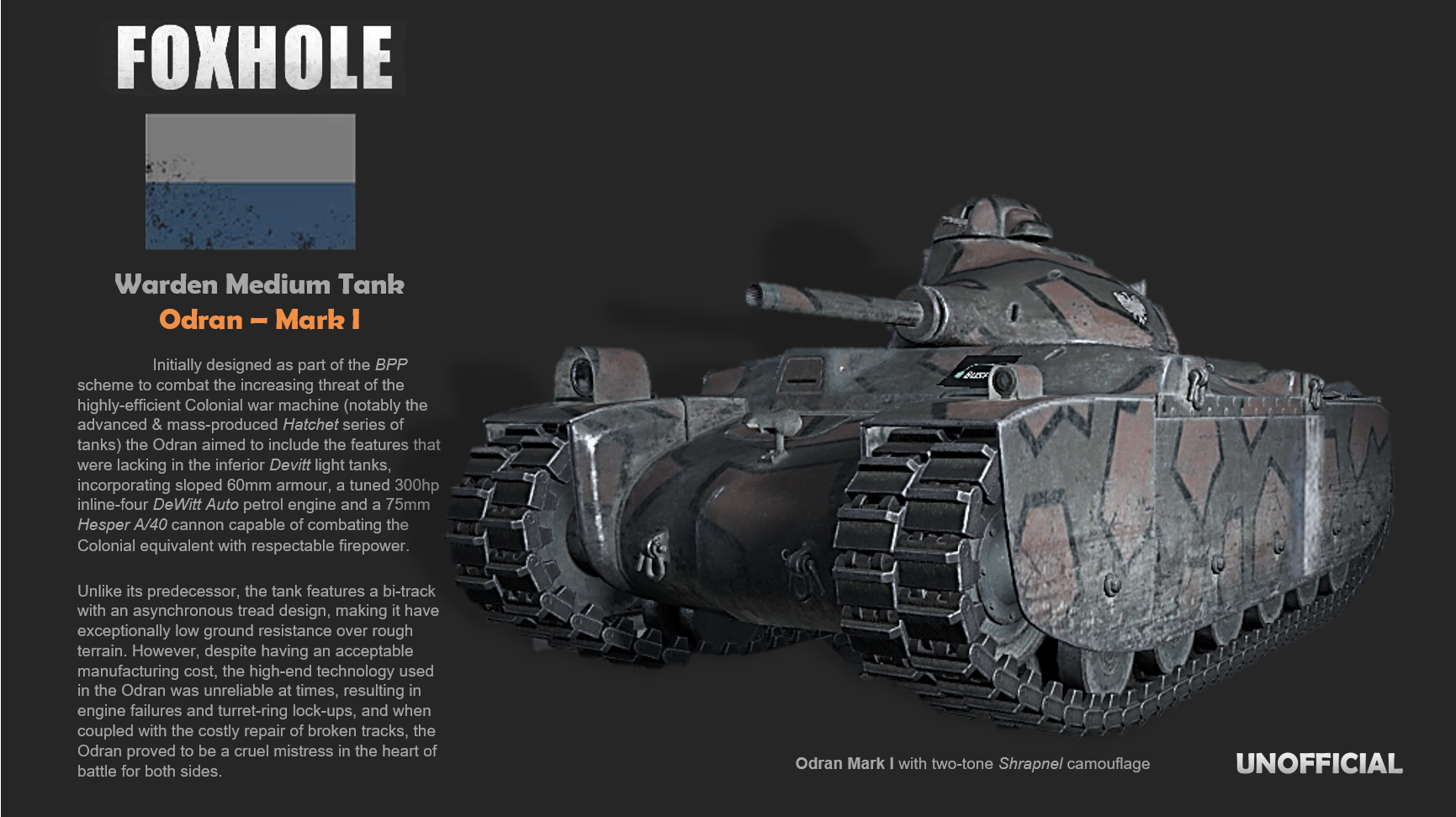 A lot of Medium tank designs. It's almost as if the community is trying to tell us something. 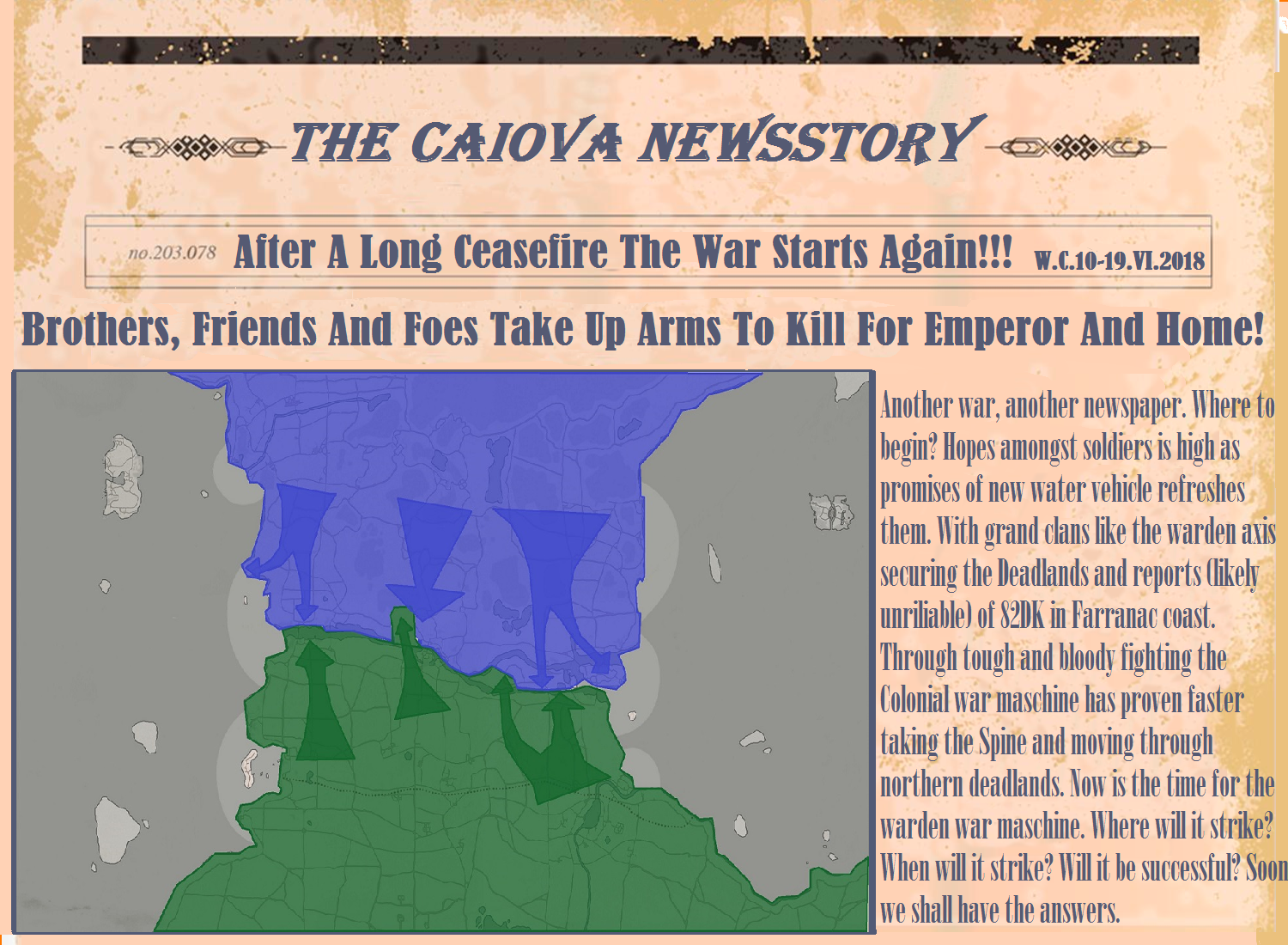 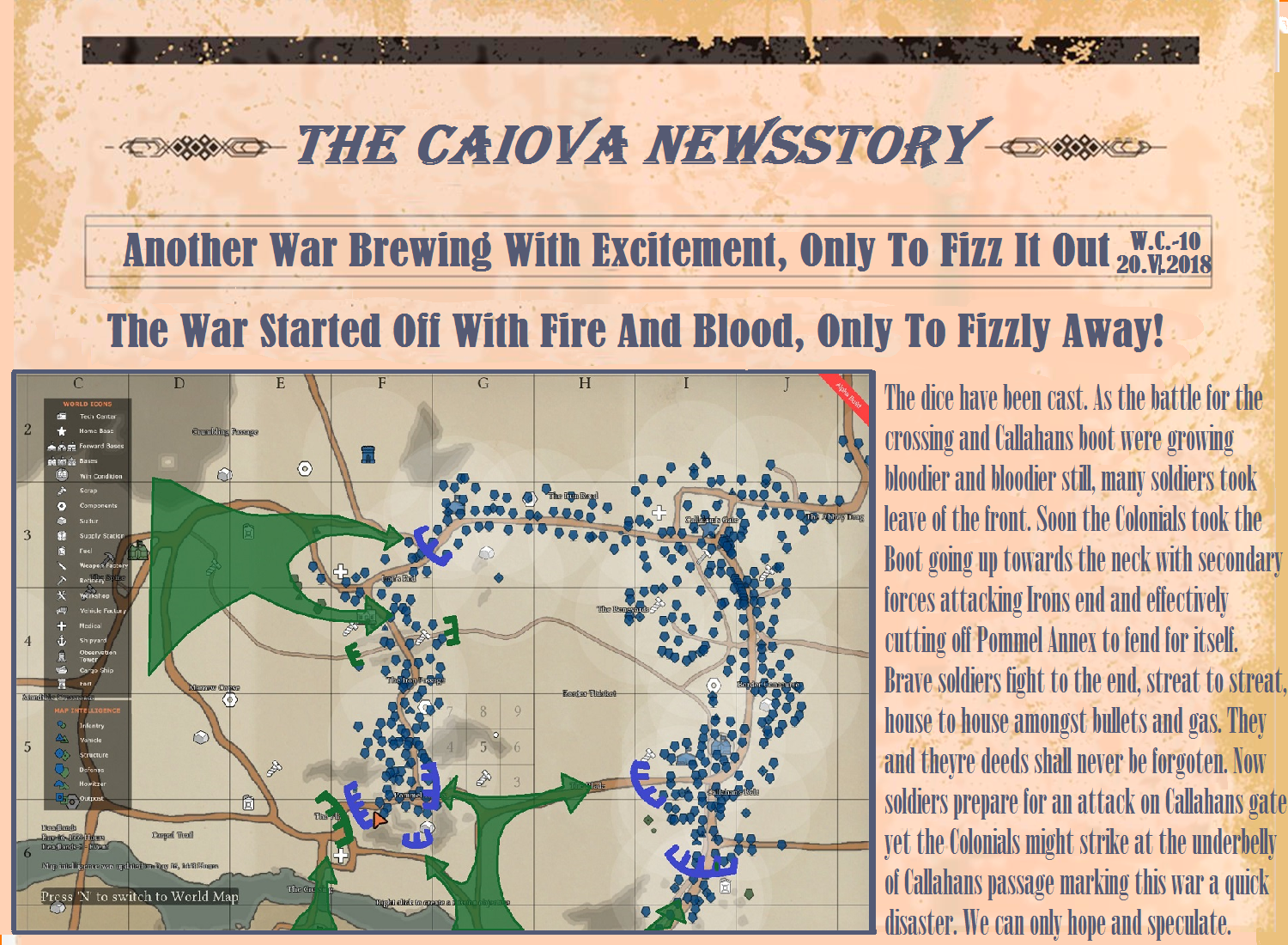 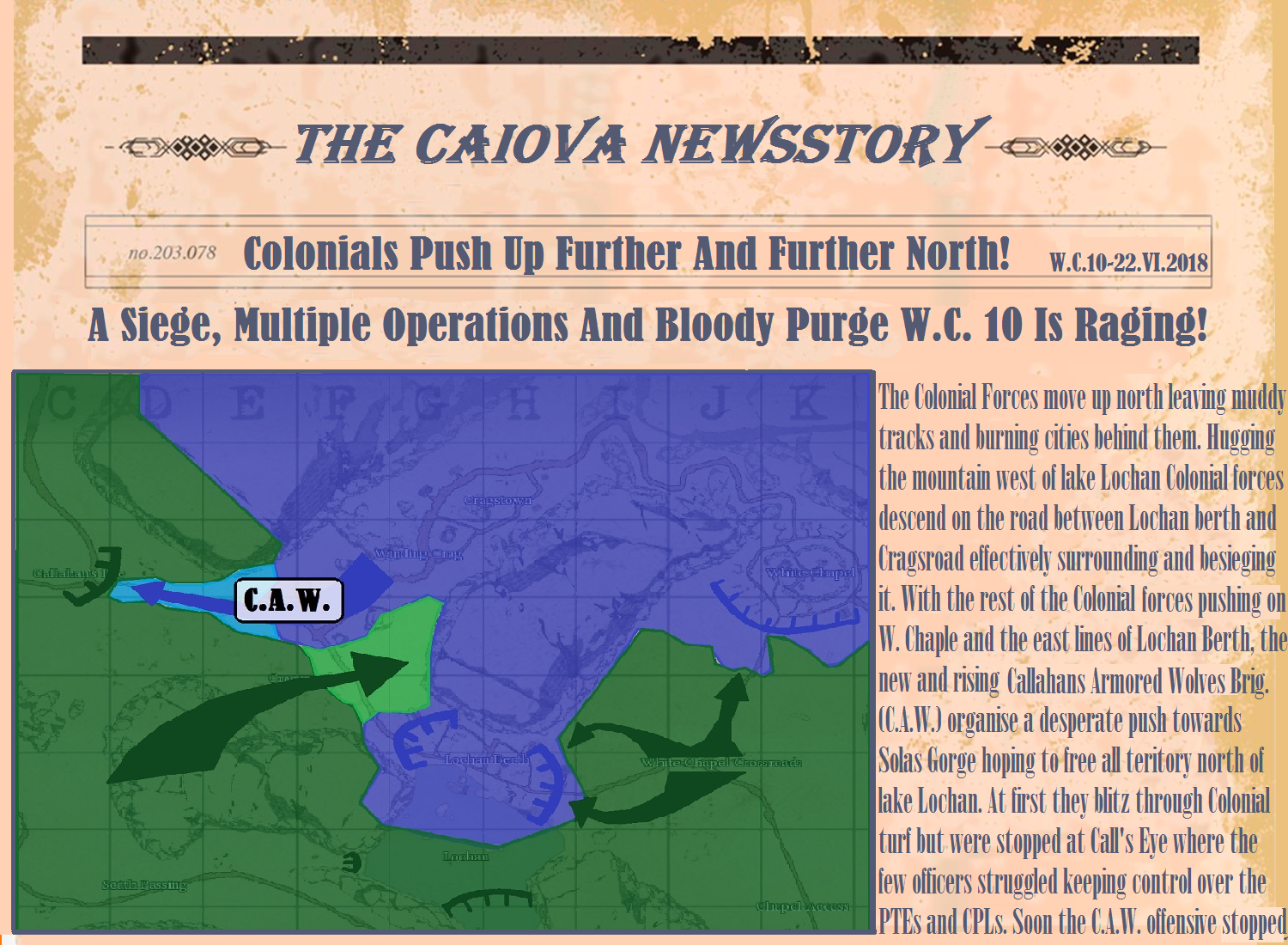 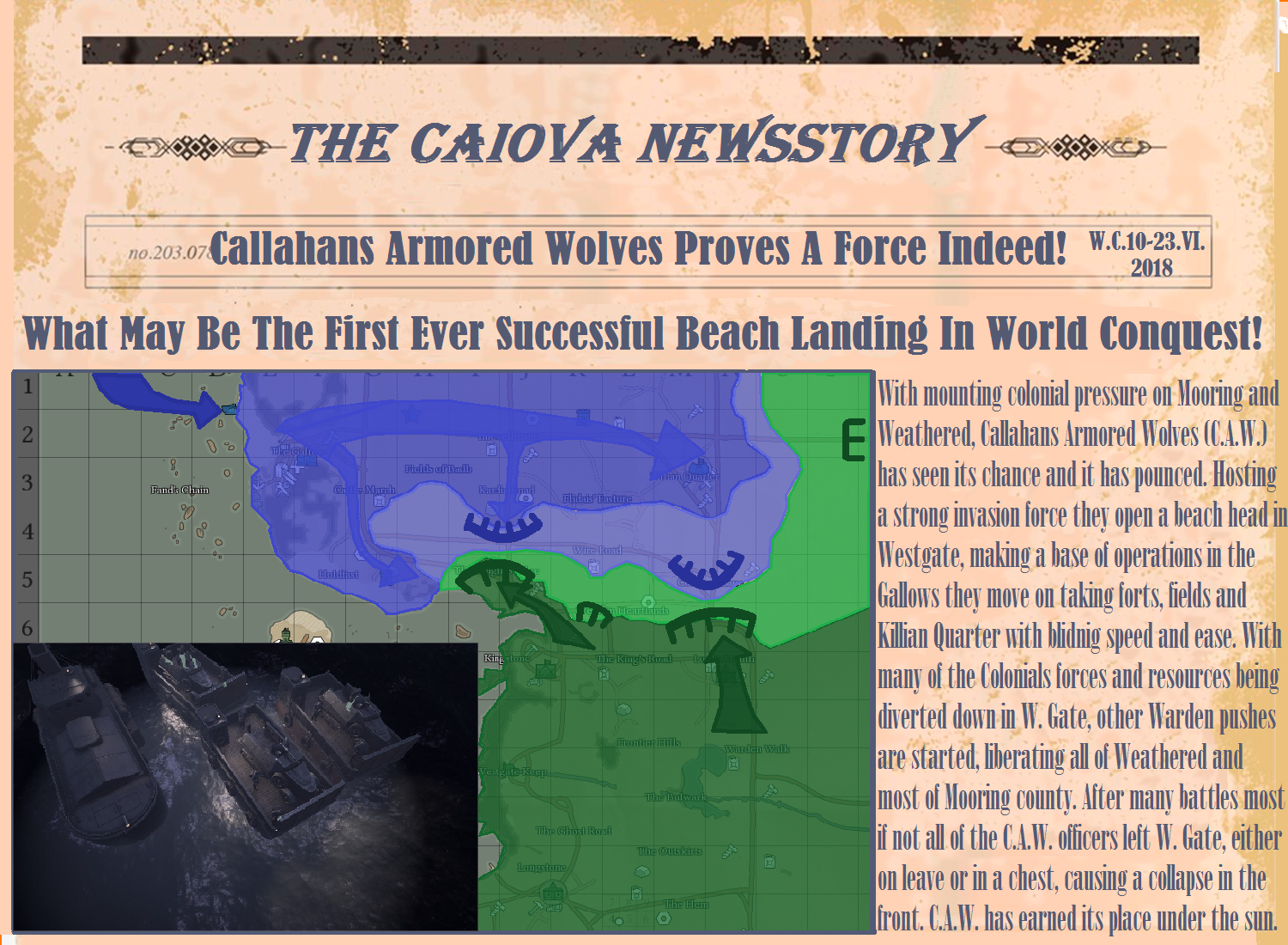 The little ragamuffin that sold me this newspaper took the funny pages out of this newspaper. Now I'm forced to read the news on my lunch break instead of doing the crossword. War is hell.

A complete recap of the first 8 wars as told by the War Correspondent and then presented by kastow. Insanely cool.

This was a story written by Mashed Potatato... I was told it had originated in #War-Stories but im afraid I couldn't find it. So you'll have to squint really hard to read it. OR You can just watch this recap... Should be in there!

Battered Bastards of G15 Day 1: Arrival The day had come, our division was transferred to the frontlines to relieve the 24th Armored Division. By the time we arrived, the FOB was in chaos. On the spot, dozens of men caught a bullet in the heat of combat. As a field medic, my job was to save them, as much as I can. By tomorrow, I'm confident we will storm the Warden capital.

As I write this, I am pinned down inside a foxhole under machinegun fire. Casualties mounted by the hundreds. Men I tried to save were shot when I stopped their bleeding. Our regiment was unable to gain any ground due to the heavy defenses. Every time, we experience a bayonet charge, an APC assault, or bombarded with grenades or green ash. Bodies littered everywhere. I knew at this moment, I was in hell.

Our morale was weak, our supplies 85% gone, our manpower grew weaker every minute. All the time, I saw my comrades and friends fall in front of me. The cries for a doctor filled my ears, but I am unable to move. Bullets, grenades, green ash, everything possible thrown at us. Although we are at great odds, we still held the line. Our only last commisioned officer tried to organize us for a charge, but many refused due to the lack of any ammunition. He did, causing himself to die in the process. The battle still raged on for hours and hours.

I'm tired, I walk around numb, we all are. All memories of crushing the Wardens with ease, patriotic thoughts, all gone. With only one thing stayed clear in our minds, staying alive.

The fighting had broke our sanity. We wake up to gas grenades thrown into our barracks. Med kits were completely gone, with our only option to loot the endless bodies on the battlefield. Our manpower lowered to 147 men, or as I remembered it an hour ago. Which makes me think, how did I make it this far?

When I ran to the frontlines, I did my duty, keeping men alive. In front of me, men hurdled up behind a single sandbag, or nothing at all. I pulled them out of there, stopping their bleeding with the remaining bandages I have. Many bled out, but some lived.

The hardest thing to accept as a combat medic, that you failed to keep your friend alive. As I ran back to our HQ, several stray bullets traveled straight through my left leg, I collapsed while treated by another doctor. I was traveled to a field hospital, miles away from the G15 FOB. They chose me to be sent home, as the wound was serious and I could never return to combat ever again.

I still didn't forget that day, desperate men who fought in a desperate situation. That day, we became known as the Battered Bastards of G15.

A mass of our men lined up side by side, APCs by the dozens littered the shore of Kukri in the early hours of the dawn. There was a full company of us, Some from Veli, Mesea, others like myself from more distant lands of our great nation. The young and old shoulder to shoulder rifles slung by the strap over the shoulder, all with the same cold steely stare in their eyes. We held our breath as we listened to the briefing from the Captain. I scanned the shoreline. Alongside our fleet of APCs were what mustve been at least 5 gunboats. The crews scurried back and forth, carrying shells and boxes of ammunition between the fortifications and their vessels, I never had seen anything like the Captains vessel though. She was massive, a Cargo ship sat in the middle of us all. She was the most impressive thing id ever seen. We set off for our fates. Strong Beach we would crush the Caovish bastards under our boots. We would prevent the expansionists from ever laying a finger on our land. We would purge their greed and corruption from the world. I readied my rifle, loading the stripper clip fully into my defender. I walked forwards and felt my stomach drop as I settled into my squads APC. We surged forwards from Kukri, The fleet Set off.

The Gunships presented broadsides. Us infantry huddled together in the confines of our metal boxes. Some of our men grimly referring to them as our Coffins. The trip continued in silence. Only the sounds of sea birds the engines and waves broke the silence. Not one of us said a word as we approached the and awaited the rallying cry of our captain. "OPEN FIRE" Screamed the captain. The gunships cannons unleashed a volly that made me almost feel sorry for the Blueys on the shore.... Almost. The barrage persisted the shells pounded away at their lines. Explosion whistle Thud. Repeat. I was in Awe. It felt like hours but was likely just minutes. The order came. The cargo ship dropped its ramp. We knew our job. Kill every last Warden. Get off the Beach. Take Ides. I looked around at my fellow men. Several of us seemed ready to take command but many seemed lost. The ramps dropped we surged forwards like an ocean of death.

The tilde wave of our men rushed forwards, war cries rose through the ranks. The men armed at the ship, Barges unloaded supports. We moved up and pushed off the beach and surged forwards to Ides. On the road off the beach many men become disoriented. I took to rallying them, Screaming at the disorganized mass to form up, slowly but eventually I had a large unit at my back. We rushed forwards into the heart of ides and crushed any defenses in our way. Our field guns tearing through Caovish blood and entrenchments alike. The force pushed all the way into the heart of ides while a separate detachment conquered Skelter. The operation was a success. At our feet laid dead and dying Wardens. We fixed bayonets and took to the task of clearing out the trash. The force entrenched and over the next several days we began assaulting the islands the cowardly caovish slime infested like rats. 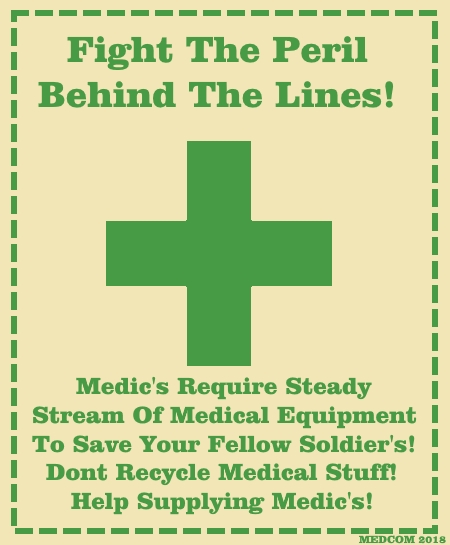 I could be wrong but I think these are from a much earlier, previous community highlights but I am both too lazy to check, and also I think Medcom could use the attention because they're awesome people.

I.... I have no idea. No context. I see a picture like this and it makes me wonder if maybe im just insane and for one brief moment, this image, is the only sane thing that makes sense in my whole deluded world.

But like, who holds a bayonet like that? And what the hell is he stabbing? A bush?

The true path is the path less traveled by.

I get that this is an image that means everything is "OK" but why does it say "Look" there in that one spot? 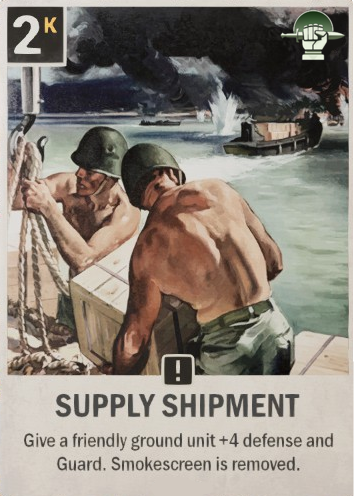 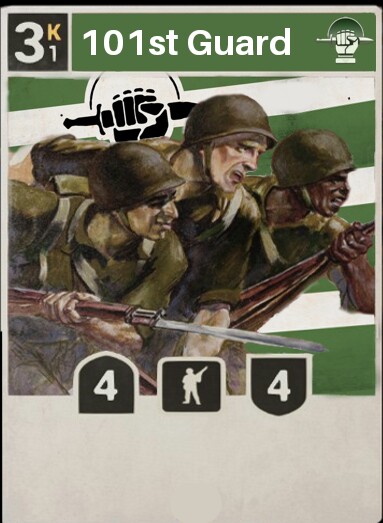 Slowly but surely the cards are amassing to create a complete card game...

This is from Company Of Heroes I think... which I love because Company of Heroes 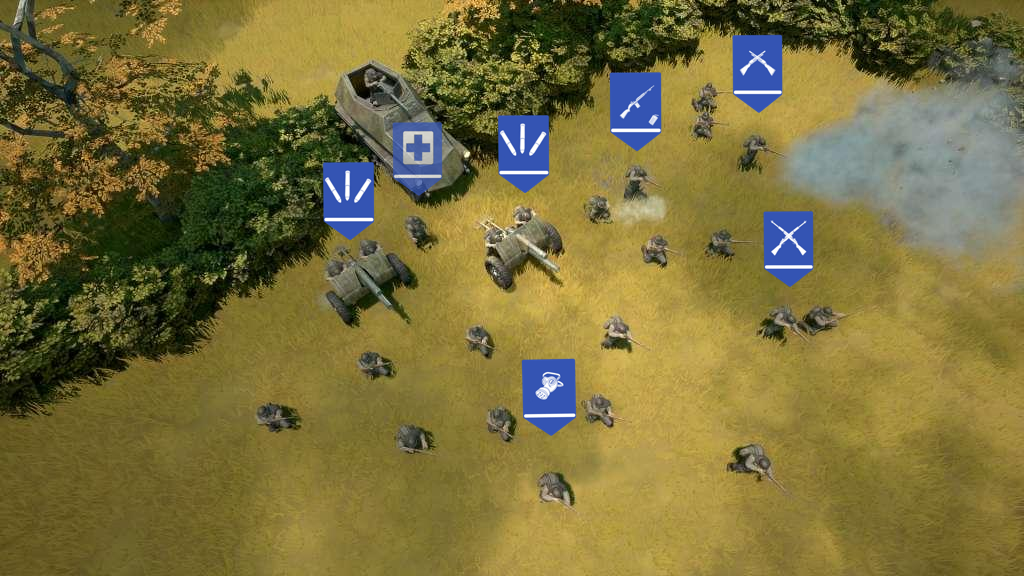 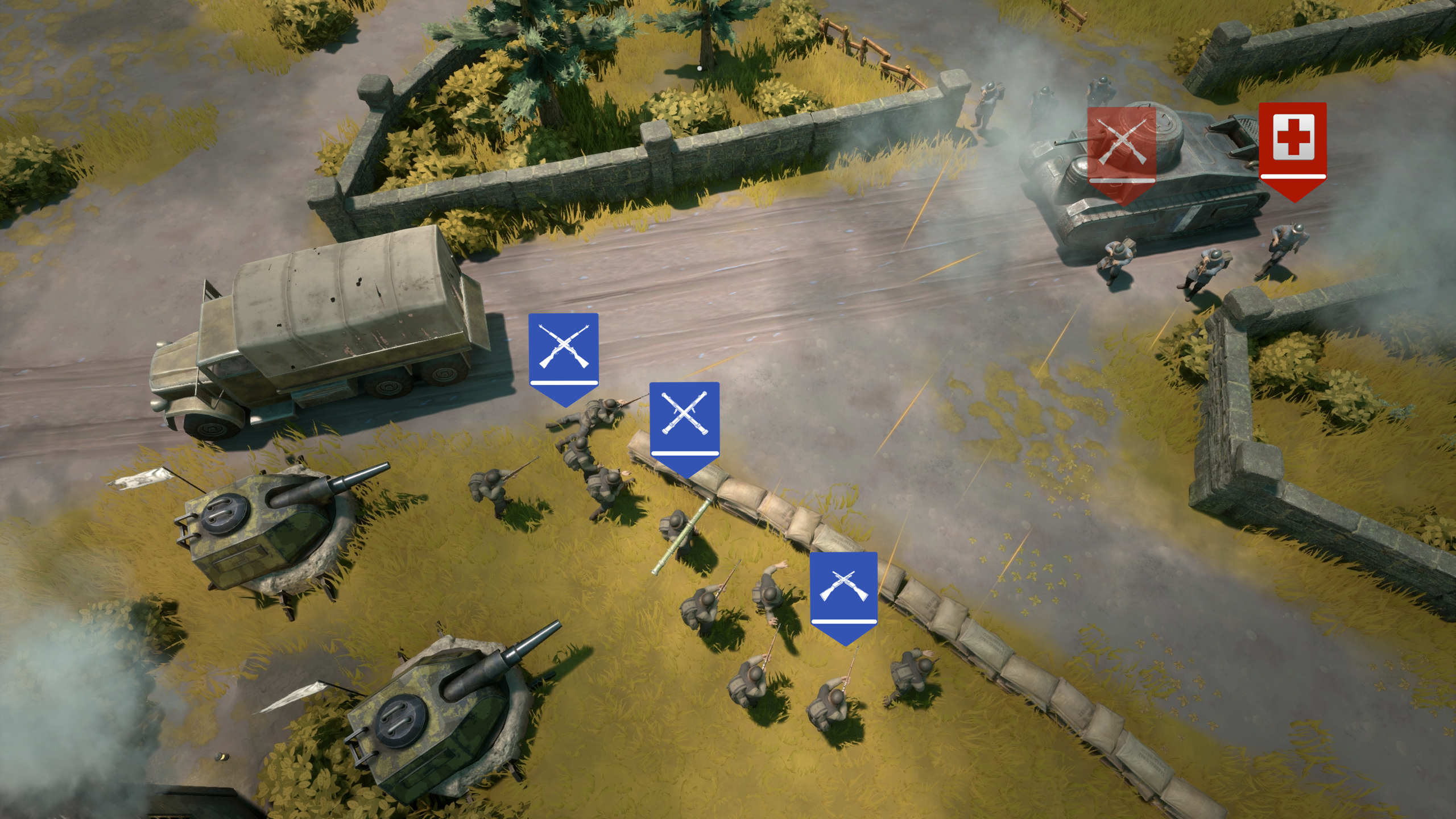 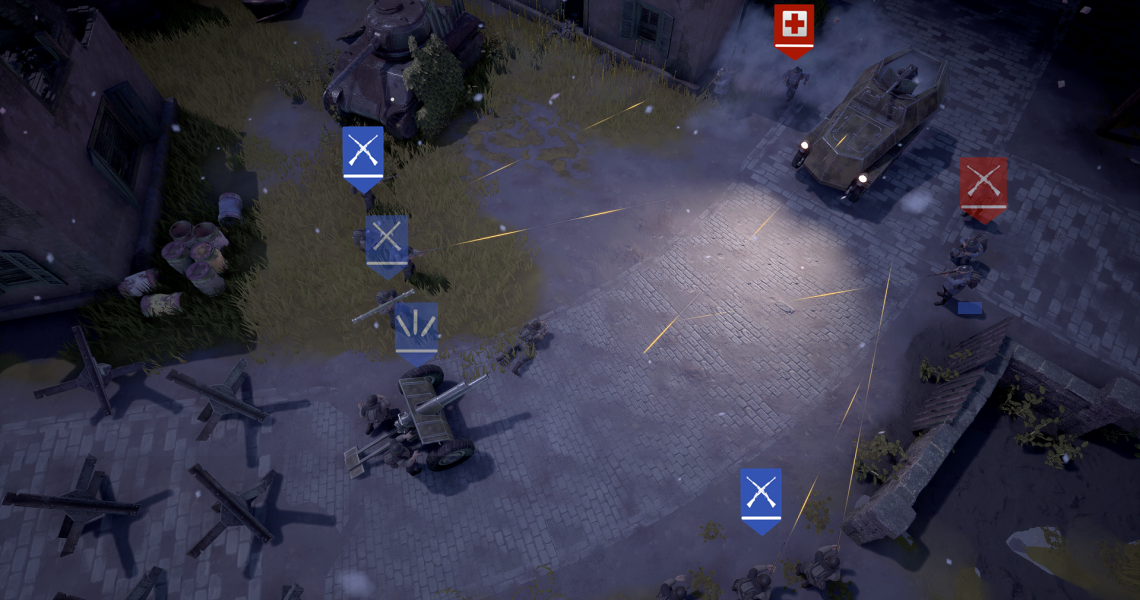 This is super cool. I love the idea of this because visually it sells the idea that what we're playing is a strategy game first and foremost. A little magical to see the icons appear over everyone's heads, but still... Very cool. 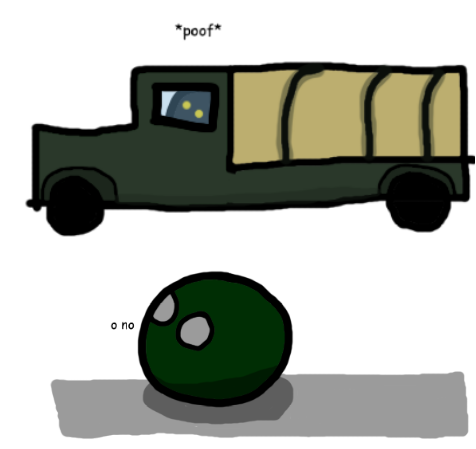 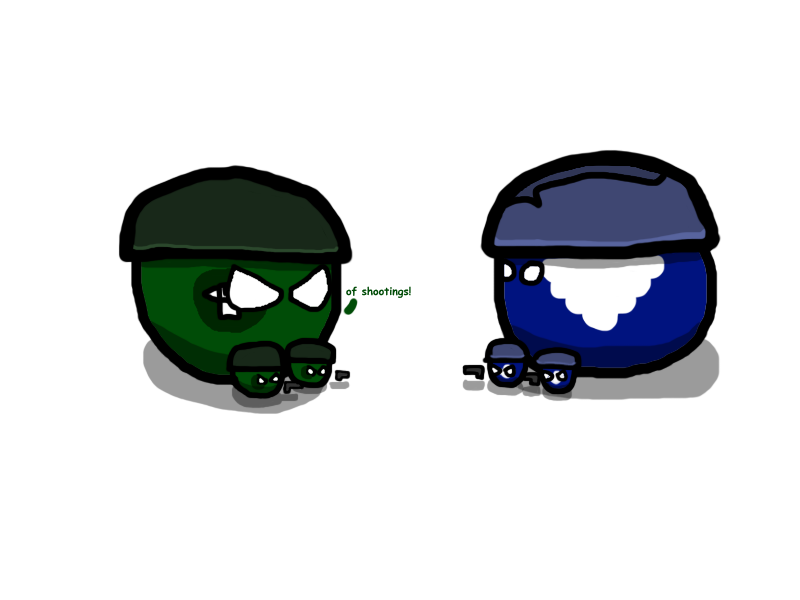 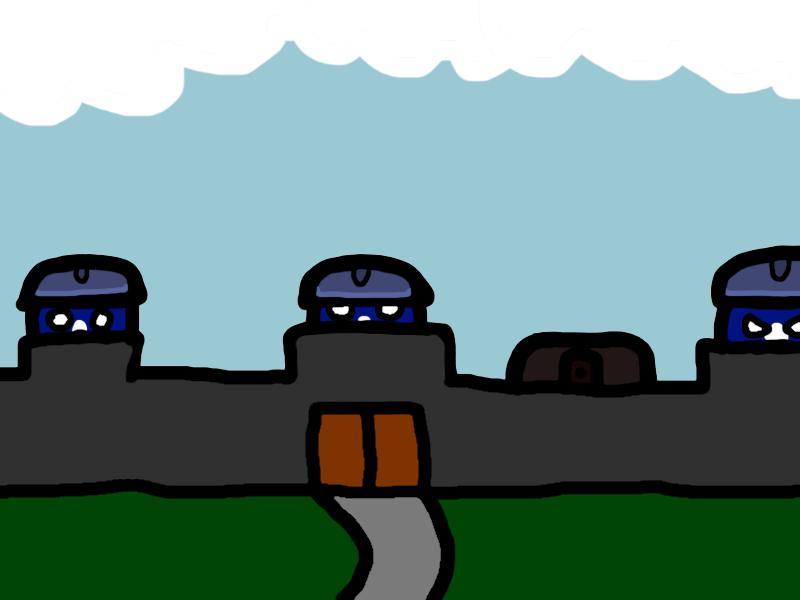 Foxball is back with a vengeance! We missed you Insanity!

I Saw A Bear was late producing this one. Something about real life and a job or some such. Crazy guy.

What do you mean this video wasn't highlighted in this post? Of course it was. It was here all along.

Look at all this warden filth disgorging onto our pristine colonial beaches. Buncha cockroaches...

By: The Hoodied Thief

Hey! I was in this one! Man I love this thumbnail. Looks good.

Okay but its kind of weird to call *yourself* the axis. Technically you would be the allies. If you're warden. Silly billy.

Okay so this is the first foxhole-inspired reaction... video? I think? You're a weird guy, Golden. Weird guy.

I've totally been that guy on the other side of the bayonet before. That sucks. Not having your weapon out at just the wrong moment....

This was great guys. The videos are really getting impressive. I absolutely love all the naval stuff too. It's thrilling to see it all working and that landings can actually happen now. Keep it coming. Especially you Freerk. No rest for the wicked. The Community Highlights is only fractionally yours. You need to branch out to propoganda and videos so you can steal the show on every section.